Indian tennis star Sumit Nagal bowed out of the ongoing US Open after suffering a straight-sets defeat to world number three Dominic Thiem in their second-round contest yesterday. 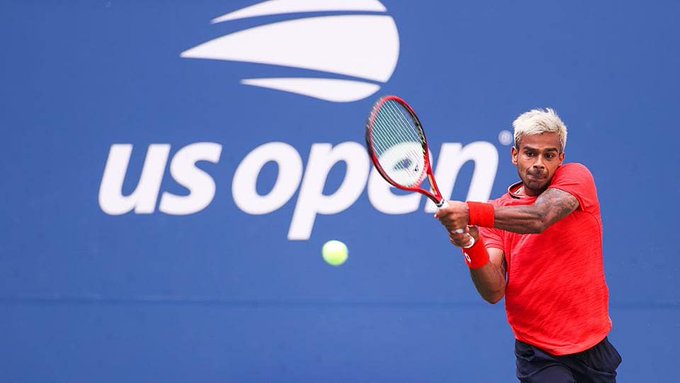 Nagal threatened early in the first set, leveling the scoreline after being down 0-3. But Thiem put his foot on the gas pedal to reel off the next three games, taking the set. Photo courtesy: Twitter/@nagalsumit

The performance was an improvement for the Austrian, as he was able to find his rhythm and hold a tenacious Nagal, who had looked threatening in the first set, at bay. The two battled out heavy exchanges from the backcourt for most of the match, but Thiem managed to stay in command from way behind the baseline.

Nagal threatened early in the first set, leveling the scoreline after being down 0-3. But Thiem put his foot on the gas pedal to reel off the next three games, taking the set.

Thiem’s dominance continued as he broke Nagal at love to end the second set, and the Austrian’s momentum never slowed the rest of the way. Nagal fought through to the very end, but a volley that sailed long handed Thiem the victory.

"Thank you 2020 US Open. Lots to learn. Going to keep working hard! Thanks for all the support everyone," said Nagal in a tweet after the defeat.

“I think it’s going in the right direction,” Thiem said of his improved play in the second round. “It’s difficult to say where I stand, I’ve been playing a lot of exhibition matches while we were away, but it’s not the same as here, where it’s more serious. I would like to get back to where I was before we stopped playing.”