A resident yoga teacher at Trust Yoga has been accused of sexual assault.

In a Twitter thread on July 31, a yoga practitioner went public with incident. "On the 11th of July, Saturday, I attended a Hatha class at 4pm at Tr*st Yoga and was molested by a resident teacher there," she wrote.

Lim, who is a registered yoga teacher herself, the lady said that she has been practising yoga for around two years, and is "very comfortable" with receiving adjustments in general.

She detailed two "gross violations" that occured in the Hatha class that day. "Two incidents occured during class: 1) he smacked my left butt cheek when I was in a forward fold, and 2) he stroked from my left butt cheek, my crotch, to my right cheek when I was in an inversion called pincha mayurasana. It was a deliberate stroke that lasted about 3s?"

After both incidents, said teacher then "acted as if nothing untoward had happened". 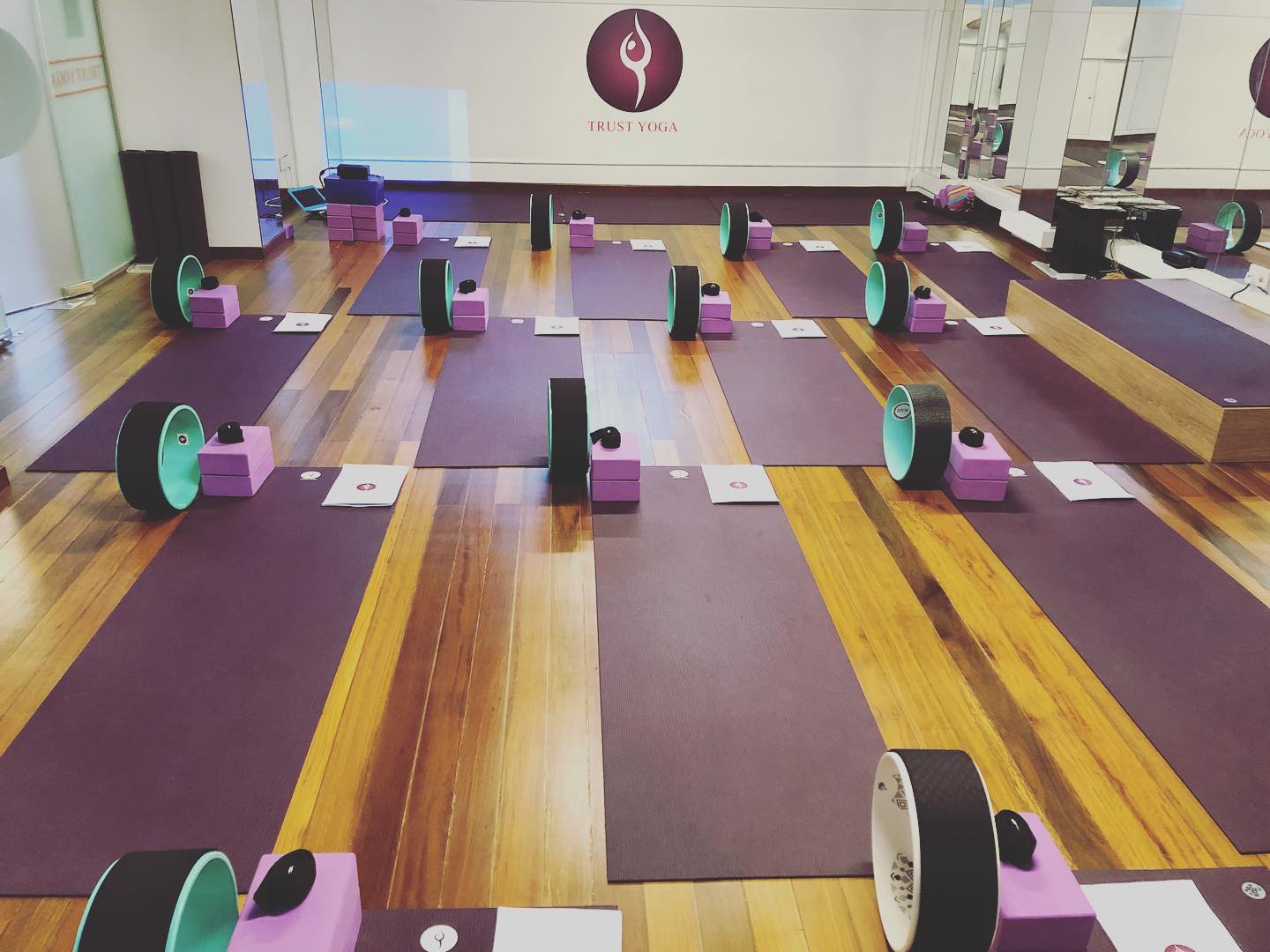 Deeply shaken, the lady told a staff member at Trust Yoga that she had been touched inappropriately. It was then that she was told it was not the teacher's first time molesting students. The staff member also agreed it was highly responsible that the studio owners allowed the teacher to continue teaching despite past cases.

"When I asked why he was still teaching, the staff said that it was due to a lack of teachers and that the business would go under," she said. 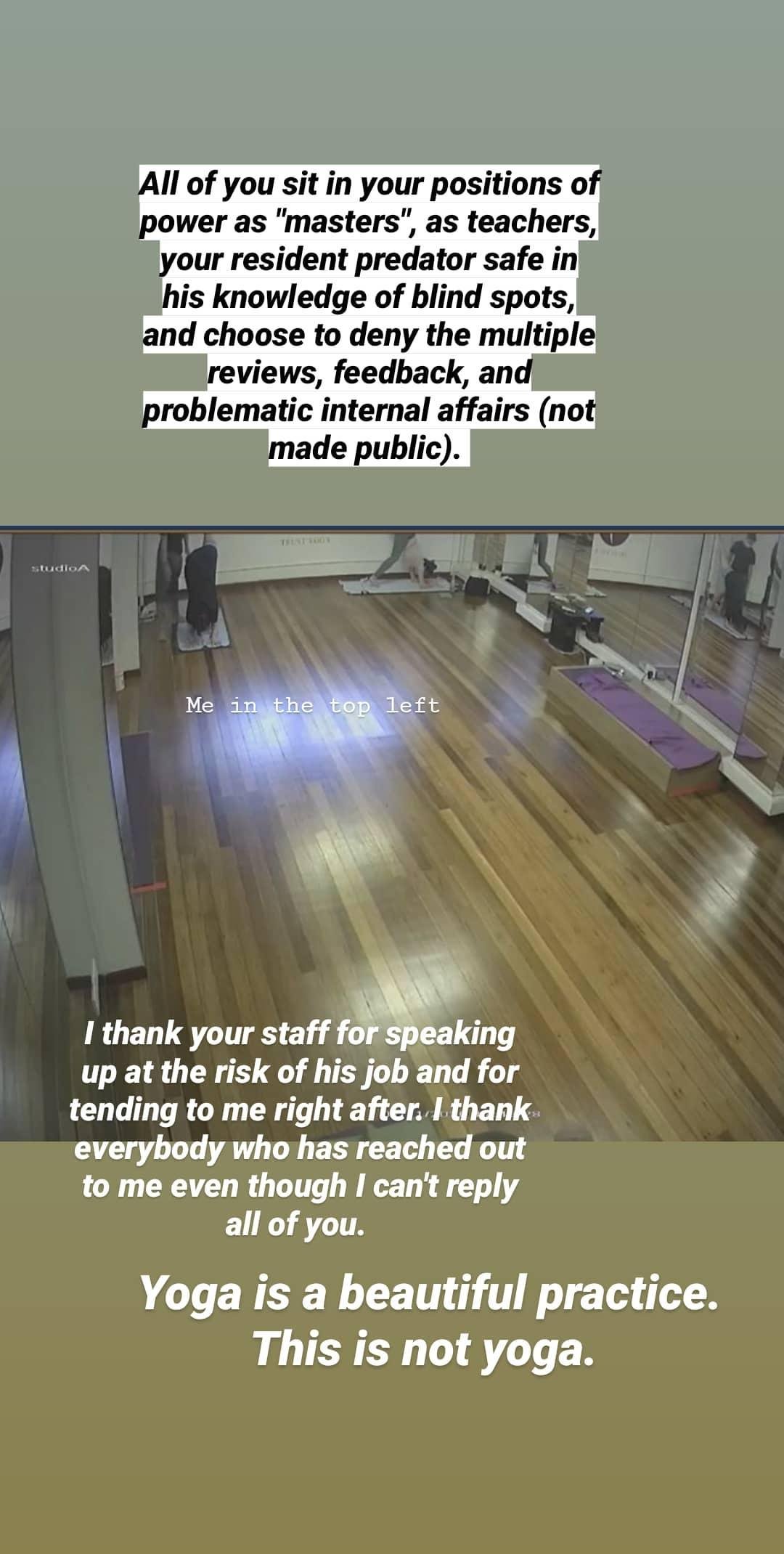 The following day, she headed down to the studio again with her father to speak to the two owners of the studio. "They were outwardly uncomfortable when I started asking about why the teacher was still in Tr*st, and when I said I've heard about his previous cases. They started fidgeting A LOT."

She added, "There was a lot of deflection (they said he has a strong base of followers, they were professional in their adjustments, he's an amazing teacher, etc)."

Standing her ground, the victim told them that "certain areas are off limits," and that she was a teacher herself.

She wrote, "Yoga is my sanctuary while I grapple with my mental health. For such a violation to occur in such a setting feels like an extraordinarily deep betrayal. I am speaking up as I hope other (ex/current) members of Tr*st Yoga who have been treated this way by R*j would do so as well, knowing that he is still doing this to other people."

At the time of writing, the thread had garnered over 650 retweets and comments. The victim's Twitter account has since been set to private.

Other yoga practitioners, including teachers in the industry, have also spoken up on their past experiences and knowledge of the treatment of students by teachers from Trust Yoga. The lady has posted them on her Instagram stories.

Reviews on Classpass warning about physical adjustments at the studio also surfaced. 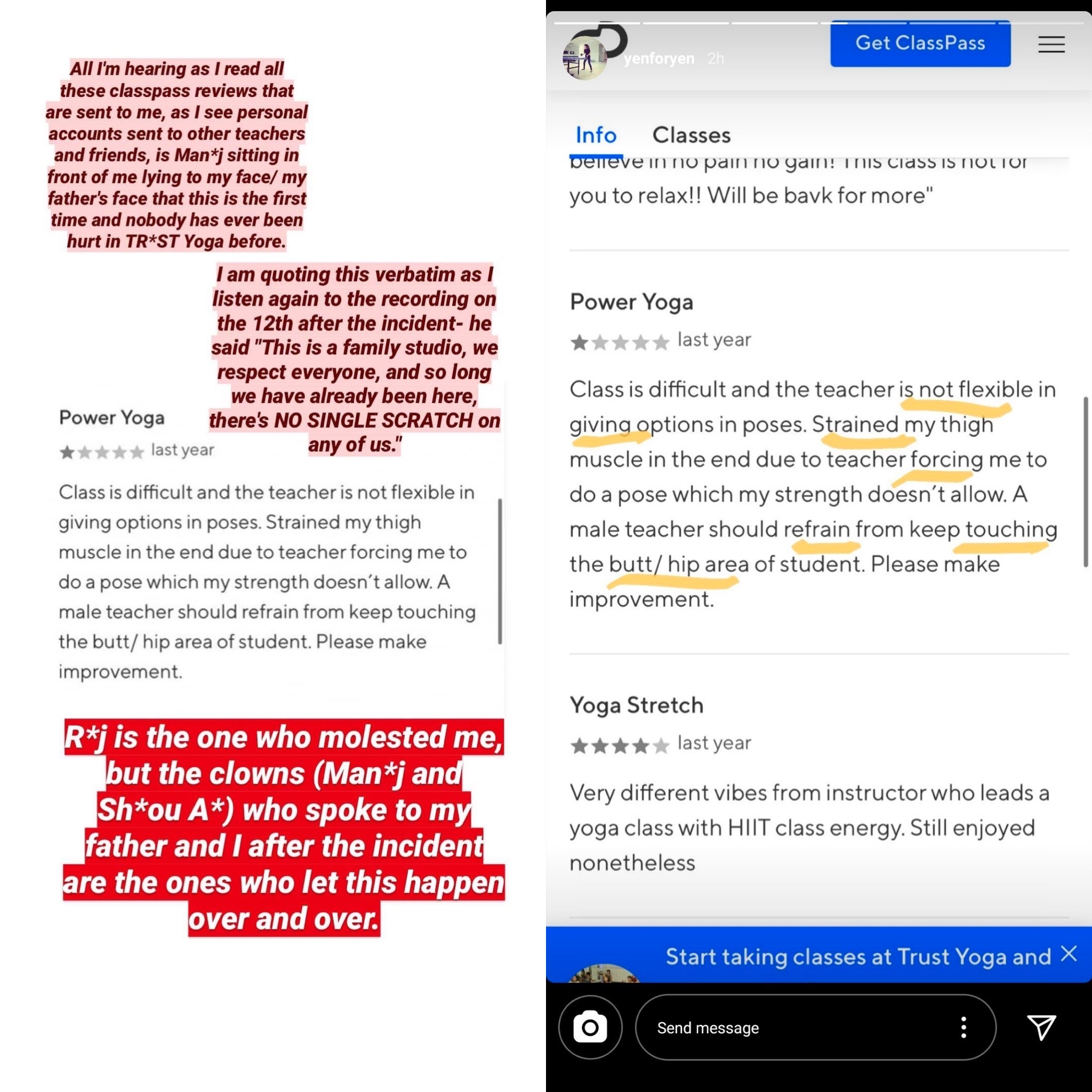