In the first investment from the Google For India Digitisation Fund announced earlier this week, Google announced a multi-billion dollar investment for a 7.73% stake in India’s Reliance Jio  Platforms. 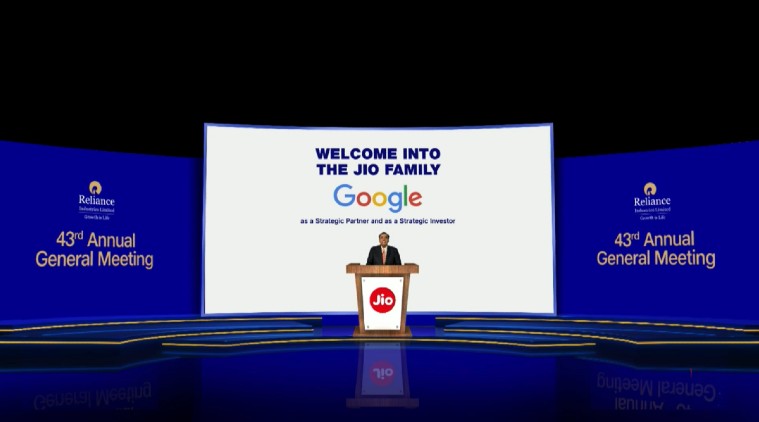 "Today we signed an agreement to invest USD 4.5 billion (INR 33,737 crore) in Jio Platforms Ltd, taking a 7.73 per cent stake in the company, pending regulatory review in India," an official statement read.

The investment from Google is one of the rare instances where the Android-maker has joined its global rival Facebook in backing a firm. Facebook invested USD 5.7 billion in Reliance Jio Platforms, which has amassed over 400 million subscribers in less than four years of its existence, in April this year for a 9.99% stake in it.

Google and Jio Platforms have entered into a commercial agreement to jointly develop an entry-level affordable smartphone with optimisations to the Android operating system and the Play Store. Google’s new investment gives Jio Platforms an equity valuation of USD 58 billion.

Everyone should have access to the internet. Proud to partner with @reliancejio to increase access for the hundreds of millions in India who don’t own a smartphone with our 1st investment of $4.5B from the #GoogleForIndia Digitization Fund.https://t.co/1fP8iBZQfm

“Getting technology into the hand of more people is a big part of Google’s mission,” said Sundar Pichai, chief executive at Google, via a video chat. “Together we are excited to rethink, from the ground up, how millions of users in India can become owners of smartphones. This effort will unlock new opportunities, further power the vibrant ecosystem of applications and push innovation to drive growth for the new Indian economy,” he said.

Google had announced its aims to accelerate India’s digital economy over the next five to seven years through a mix of equity investments, partnerships, and operational, infrastructure and ecosystem investments.