Chambhar Choukashiche Natak - The Virtual World Is The Stage

11 actors and a crew of over 24 bowed their heads in unison at the curtain call, acknowledging the audience applause that streamed in. A standard sight at the end of any play. This one, however, was different - the acclaim and applause came through laptops and phones, with the cast and crew in the safety of their individual homes.

This is how Chambhar Choukashiche Natak, a Marathi children's play, was created and performed during the COVID-19 circuit breaker period in May 2020 for Maharashtra Mandal Singapore (MMS), a non-profit organisation which hosts arts performances regularly to showcase the culture of Maharashtra state in the west of India.

The virtual play with elaborate costumes, music, and direction was 'staged' live on 25 May, 2020 on Zoom, with actors switching their cameras on and off, the way they would ordinarily enter and exit the stage.

More than 250 registered devices connected as an audience of about 700 watched the play from their living rooms in Singapore, India, Ireland, Sweden and Australia.

Connected to India spoke to director Swapna Mirashi who said that it was not an edited performance, so it took as much courage as it would to step onto a stage in front of a 700-strong audience.

Checking the weather forecast for staging a drama indoors? Yes! You read it right.

The technical team prayed for good weather and clear skies as if they were preparing for a cricket match, as, from previous experience, rain, thunder and lightning and heavy winds could cause connectivity breaks.

The outside light had to be uniform and good, as no stage lights were on hand on this virtual stage, which was made up of the actors’ homes. The laptops had to be placed facing the right direction, with the web cameras angled just right. 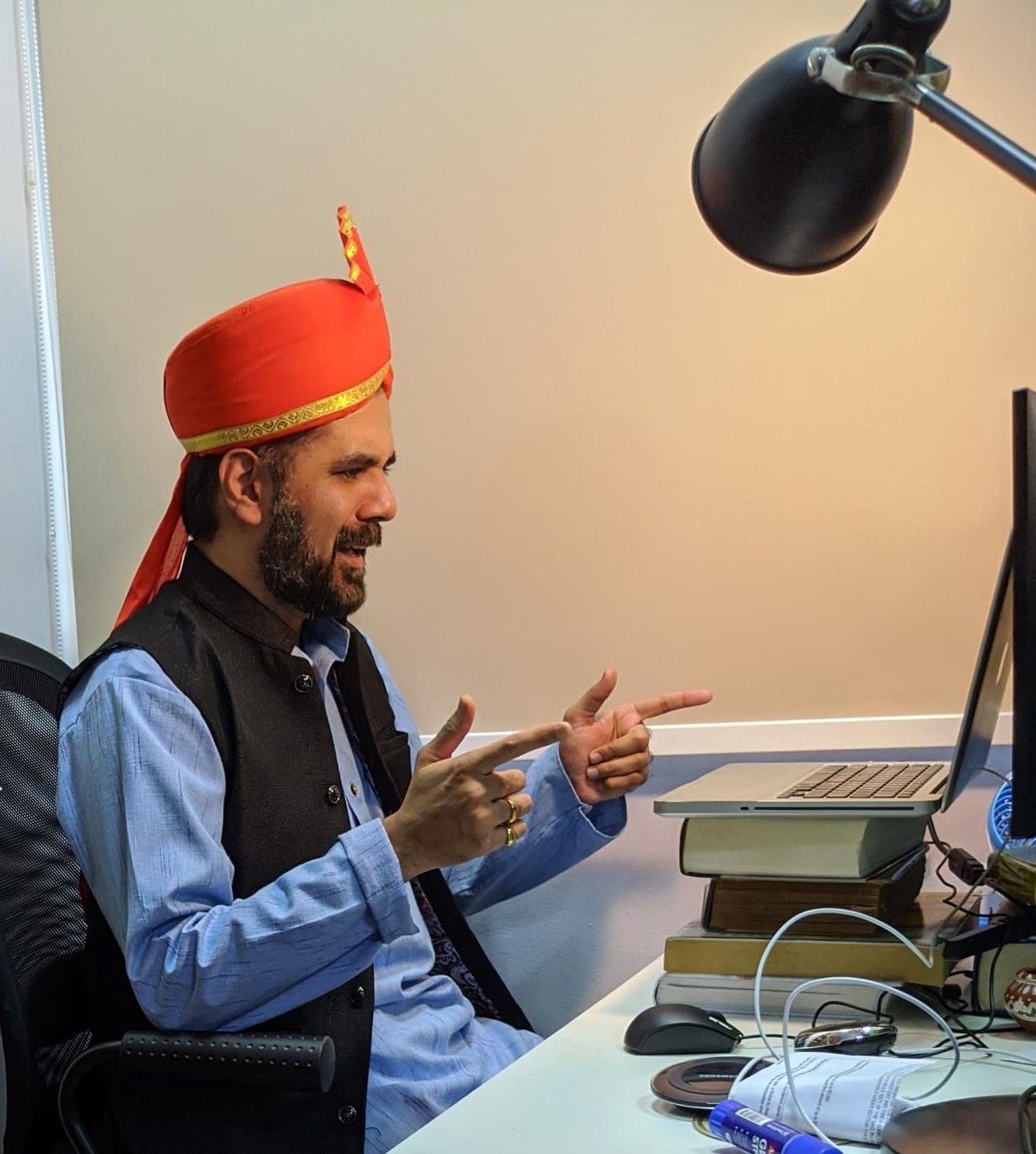 The laptops had to be placed facing the right direction, with the web cameras angled just right. Photo Courtesy: MMS

A lovely sunny, cloudless day in tropical Singapore provided the perfect platform for Chambhar Choukashiche Natak or “Nosey Parker Drama” for lack of a better translation.

Chambhar is a shoemaker or Mochi and Choukashi means to question or enquire. Seated at busy road sides the Cobbler extracts information from passers by and asks customers questions while stitching and repairing their footwear on the side of the road. Hence is termed as a busybody or nosey.

The play which was a virtual ‘prayog’

In Marathi a play is often referred to as a ‘prayog’ or an experiment. Going virtual with such a play was very much like attempting a ‘prayog’, with 16 computers - one each for 11 actors, 1 sound engineer, 3 in the technical team and 1 director - being critical for success.

“Amateur as far as drama & acting is concerned but professional as far as IT etiquette is concerned,” is how Swapna described the tech-savvy young artists who have been undergoing home-based learning since the outbreak of the COVID-19 pandemic.

Written by noted Indian playwright, Vijay Tendulkar, Chambhar Choukashiche Natak, a comedy, tells the story of a young prince’s incessant crying due to the sun’s heat burning his feet and his father, the king's, attempts to stop this in a series of bizarre ways before finding a simple solution. 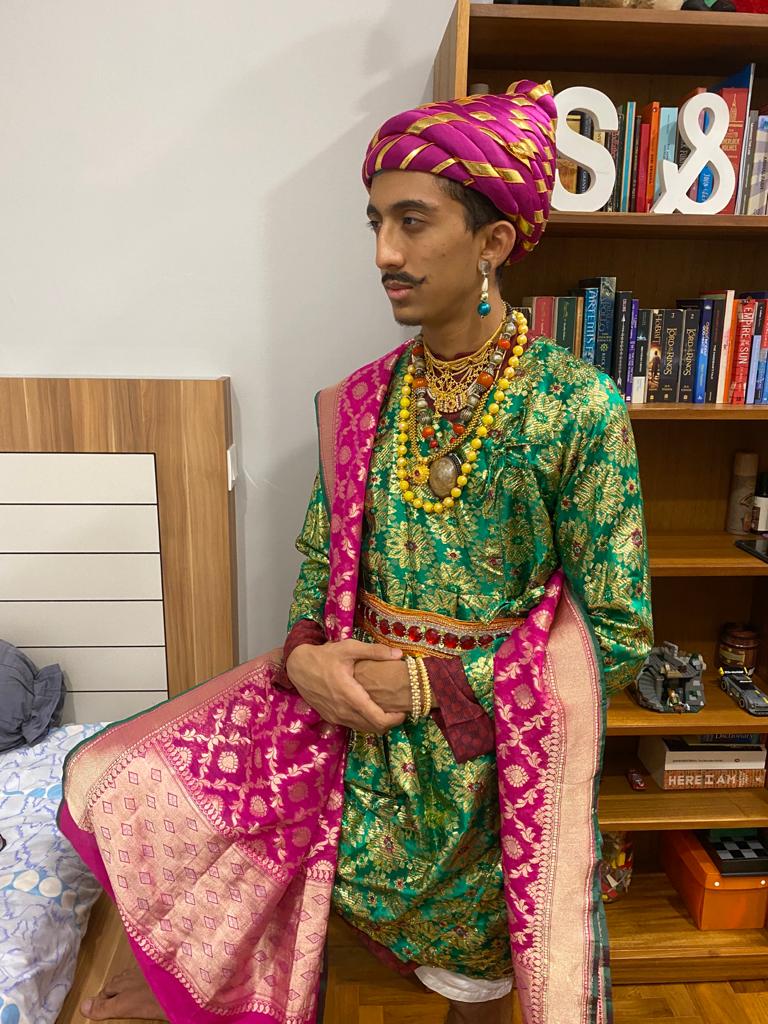 The comedy, tells the story of a young prince’s incessant crying due to the sun’s heat burning his feet and his father, the king's, attempts to stop this. Photo Courtesy: MMS

The 50-minute play ran smoothly, without any technical glitches and received an overwhelming response from the audience.

The feedback too came virtually with Marathi theatre personality Subodh Pande sending it via Zoom’s chat right after play ended. “What a great show! This experiment was first of its kind and it was so successful. Congratulations :)", he typed. 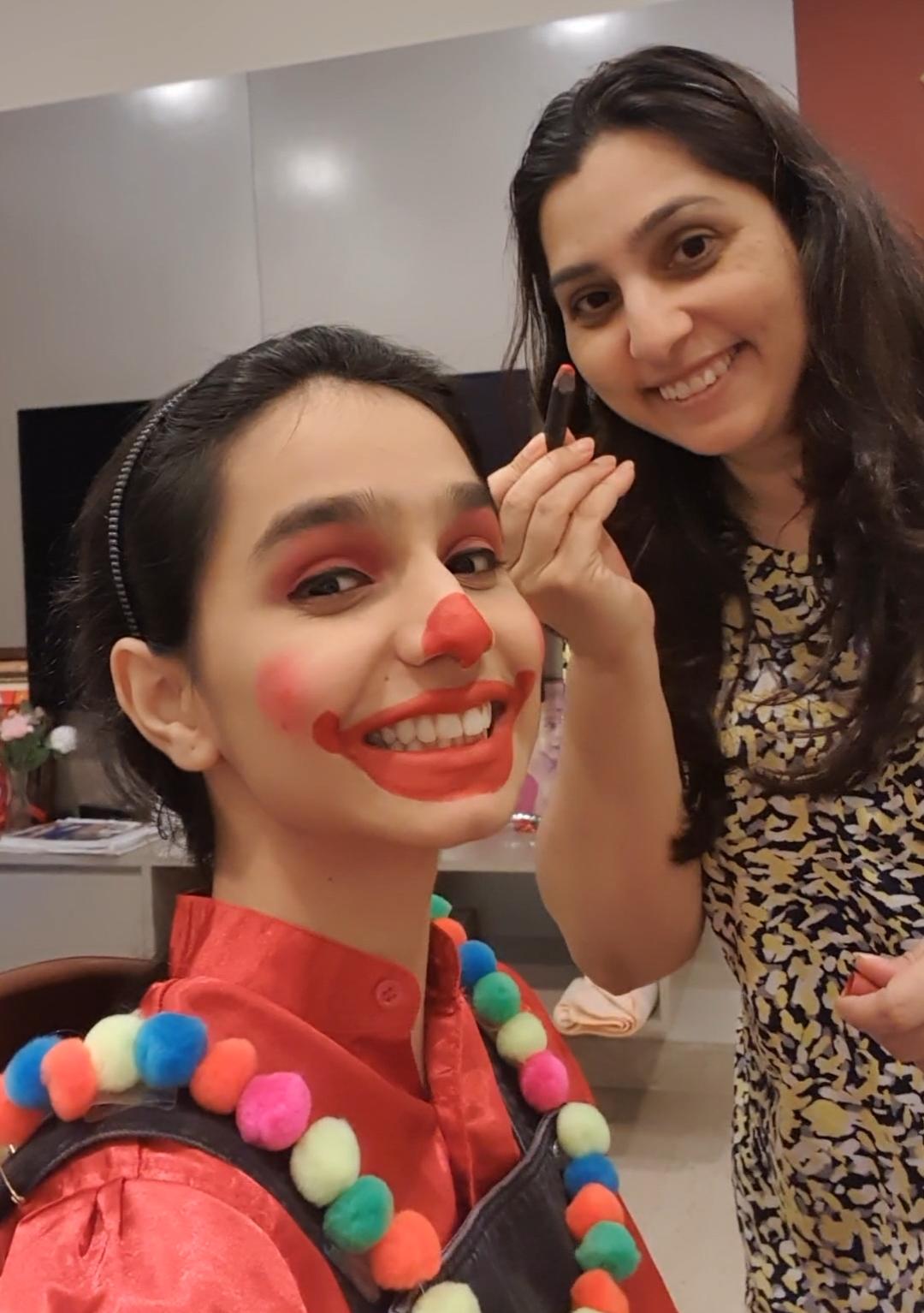 Parents did the makeup and assembled and stitched the vibrant costumes as per costume designer Aparna Termurnikar's direction. Photo Courtesy: MMS

A team isolated, yet together

Rehearsals were done via Zoom, in multiple phases. There were one-on-ones with each actor, scene wise, in small teams, followed by full teams, and then complete play rehearsals.

Background sounds, music and narration provided cues for ‘entry and exits’ of the actors.

Costume designer Aparna Temurnikar worked with the cast and their parents to assemble and stitch the costumes while she couriered the elaborately created headgear to their homes. 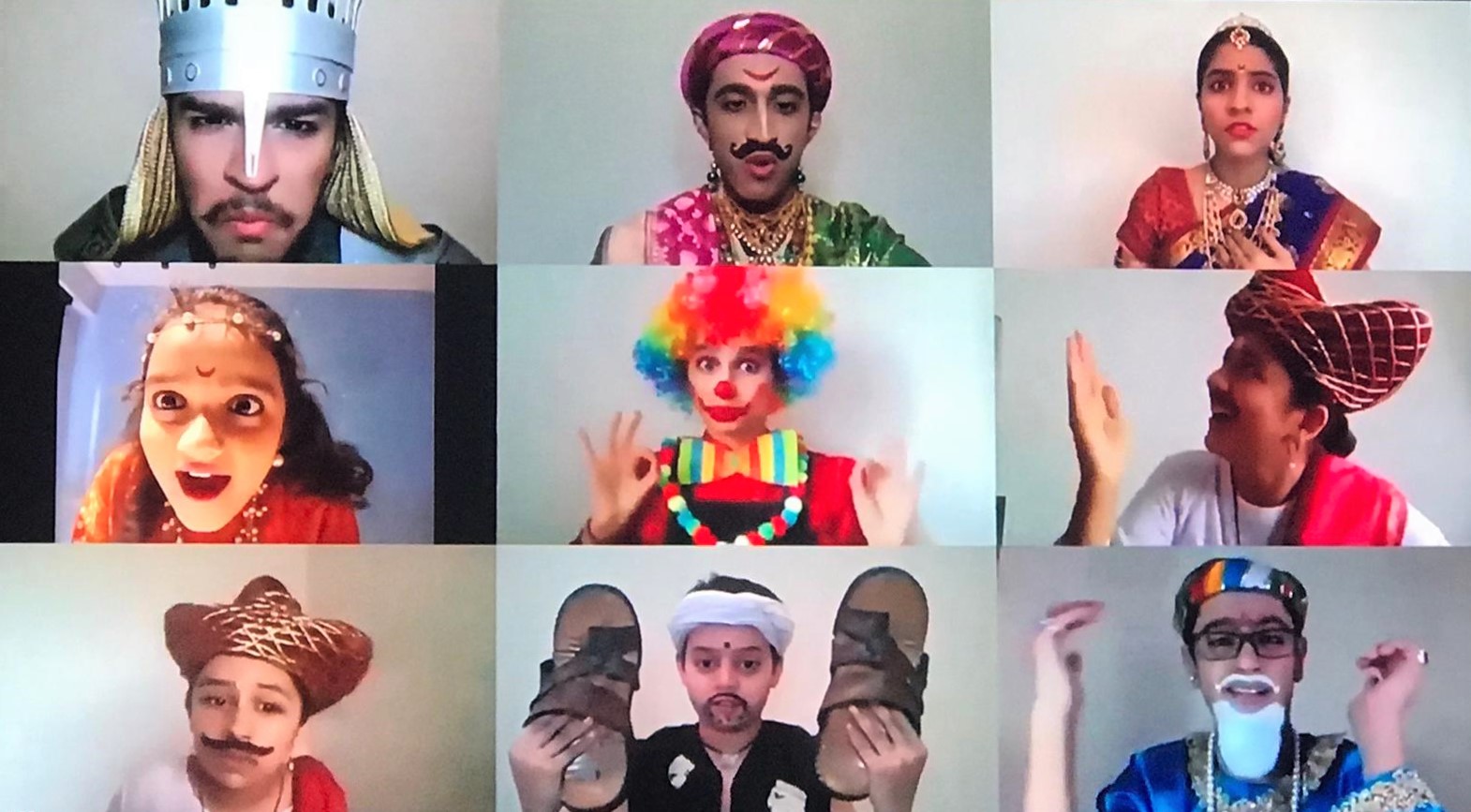 The virtual staging of Chambhar Choukashiche Natak threw up some unique challenges. For instance, the actors’ facial expressions are seen prominently but through the limits of their webcams.

“A lot of directorial effort went into adapting to the new challenges and opportunities of doing online”, says Swapna.

The new online format allowed no scope for movement or physical interaction between the actors, and the action-oriented script had to therefore be adapted accordingly.

“Chambhar Chaukashiche Natak is a very action-oriented play, what the actors do on stage is as important as what they say if not more. To make up for this 'lack of movement', we introduced other elements like action in a rap and a storytelling like narration to move the story forward”, says Swapna.

A rapper (replacing the 'shahir' in conventional Marathi folk theatre) was introduced in addition to a storytelling narrator (the ‘sutradhaar’).

As for the physical interaction between actors, that was achieved through transfer of property - which was widely appreciated by the audience. 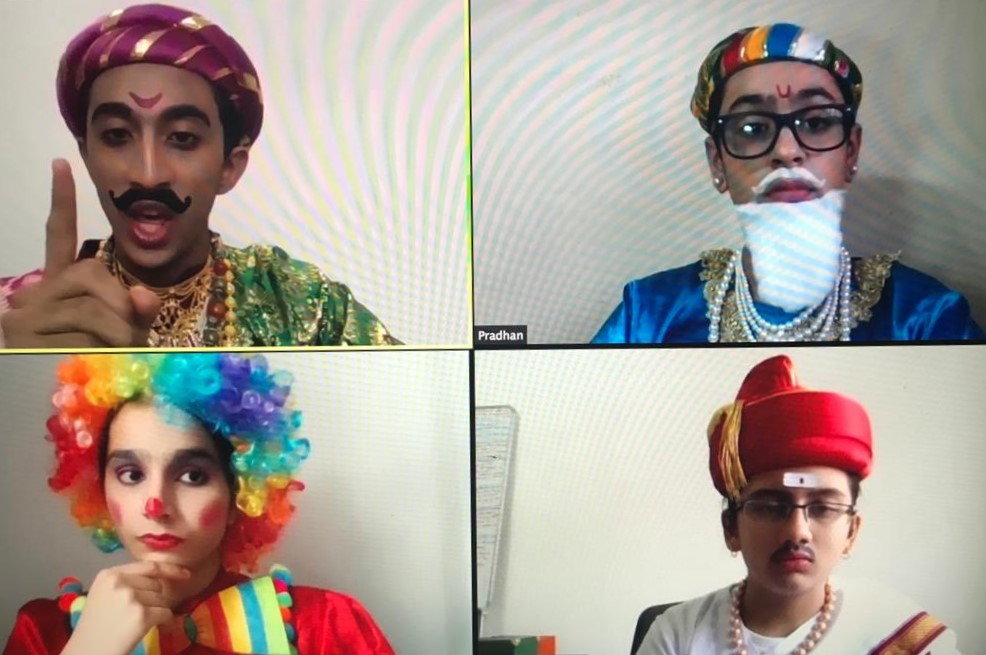 There was no scope for movement or physical interaction between the actors in this action oriented play. Photo Courtesy: MMS

“Using multiples of simple properties like masks, tissues, slippers, and a beard (all these were as required by the script), we could show the transfer of this from one actor to another. This kept the interaction between the actors alive and the conversation lively”, adds Swapna.

Drama on stage vs online

Staging a play online is definitely not the norm.

“The key element of theatre being that the audience sees the actors playing it on stage, real-time - no edits, cuts, they see as it happens when it happens in front of their eyes”, says Swapna.

The virtual nature of the play was out of compulsion, due to the current pandemic and social distancing norms. “Yet we tried to stay as true to the basis of theatre as possible, with our actors performing live, with no edits or cuts”, Swapna adds.

Staging it online did have some advantages, the biggest being “the feasibility of doing theatre under the current circumstances, maintaining social distance and yet reaching a wide audience - this was only possible online”, says Swapna. 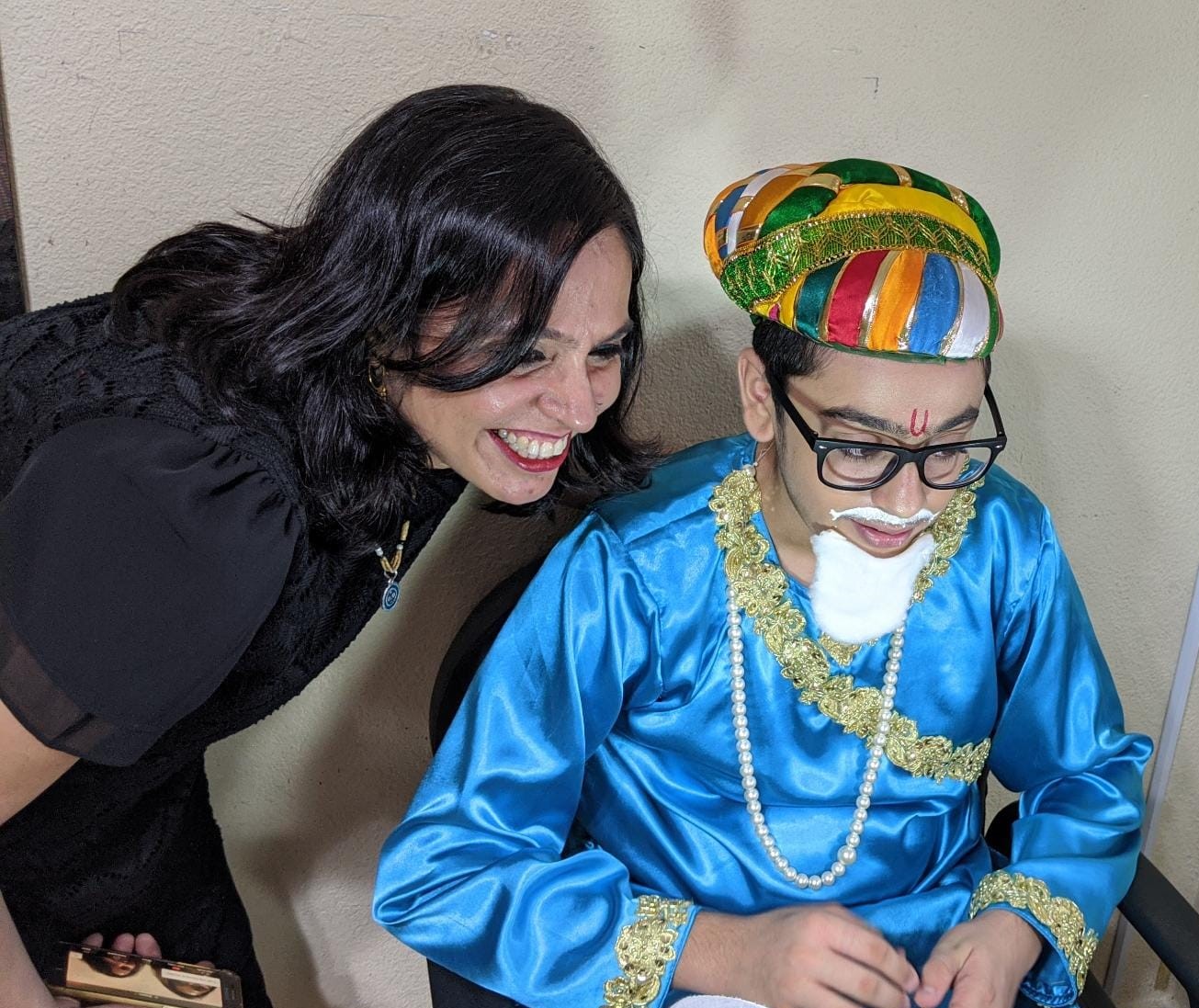 Parents provided technical support as well as moral support to the actors from their homes. Photo Courtesy: MMS

Reach was another advantage, as “we could reach a wide audience worldwide”, she adds.

Feedback too came from far and wide such as from Marathi theatre veteran, actor, director Pratima Kulkarni. “Amazing performance. It is one thing to act when the curtain goes up and lights go off, as you are transported to another world of make-believe.

To do it in the confines of your home must be demanding, to say the least.

And what was amazing was that there was a proper GIVE & TAKE, actors were reacting to each other with perfect timing. It didn’t seem like the actors were not together. It certainly gave us the joy of watching a theatre performance on stage,” she said.

“The success of a prayog rests as much in the audience's hands as it does in the cast’s,” says Swapna. This was another unique challenge as the audience was ensconced in their own homes, spread across different continents.

The play reached out to the audience ensconced in their own homes, spread across different continents. Photo Courtesy: MMS

“Under usual circumstances, the audience would leave back their worlds and enter ours, when they enter an auditorium. Here, it was important for the audience, still in their own homes, to consciously leave their world and give us their undistracted attention,” Swapna adds.

In order to achieve this, the team gave the viewers instructions on how to fully enjoy the performance and conducted a fair bit of audience education prior to the play.

London Theatre veteran, Royal Academy of Dramatic Art (RADA) Associate Director, Nona Shepphard, remarked on that, “With theatres (everywhere) closed, we are all so anxious about the future of our industry. Seeing your performance and how much fun you had and how well you communicated that to the audience, even me - someone who doesn't understand what you were saying (in a foreign language)..... makes me very hopeful for the future of our lovely theatre. Because even though we are not LIVE, the joy that you had in doing it means that it’ll never die.”

Feedback such as these and rising requests for a recording, resulted in the play with English subtitles being streamed on YouTube on 31 May.

“You’ve explored and created multiple new possibilities for performing arts in the current ‘video conferencing’ format. In that I think this is a landmark performance!” was the feedback from Yogesh Tadwalkar, well known Indian theatre personality in Singapore.

“To be able to spread so much positivity and joy in the current gloomy environment through this performance, that is our biggest takeaway”, concludes producer Nalini Thite.