EAM Dr S Jaishankar (left) assured the audience about streamlining the procedure for procuring OCI cards and their renewal during the interaction. Photo courtesy: Twitter/@MEAIndia

Jaishankar addressed the gathering at the Pravasi Bharatiya Centre in New Delhi for audiences in Indian consulates who were present via video link, broadcast to the world via a live stream on YouTube, before answering questions from members of the OCI community in a panel session with Minister for State for External Affairs V Muraleedharan and Ms Vijay Thakur Singh, Secretary (East), MEA.

“The Pravasi Bharatiya community that numbers over 30 million today can be found in every continent and virtually every nation. It is truly representative of what our society has to offer, whether in science, creative arts, technology, medicine, engineering or in spreading Indian values, traditions and soft power,” Jaishankar said in his speech.

Jaishankar began his speech with a tribute to former EAM Sushma Swaraj, who passed away last year. He spoke about the Indian government’s achievements concerning the diaspora over the past year, notably the cancellation of the blacklist of Sikhs who resided abroad after leaving the country following alleged ‘anti-Indian activities’.

Celebrating a homecoming!🇮🇳🎉#OTD- 9⃣ January
In commemoration of Mahatma's return to India from 🇿🇦, Pravasi Bharatiya Divas marks the contribution of the overseas Indian community in the development of India.@SecretaryCPVOIA @OIA_MEA pic.twitter.com/IcGybNzOvY

He also assured the audience about streamlining the procedure for procuring OCI cards and their renewal during the interaction, as well as answered questions posed by NRI representatives at each consulate, many of whom took the opportunity to wish the EAM a happy birthday. 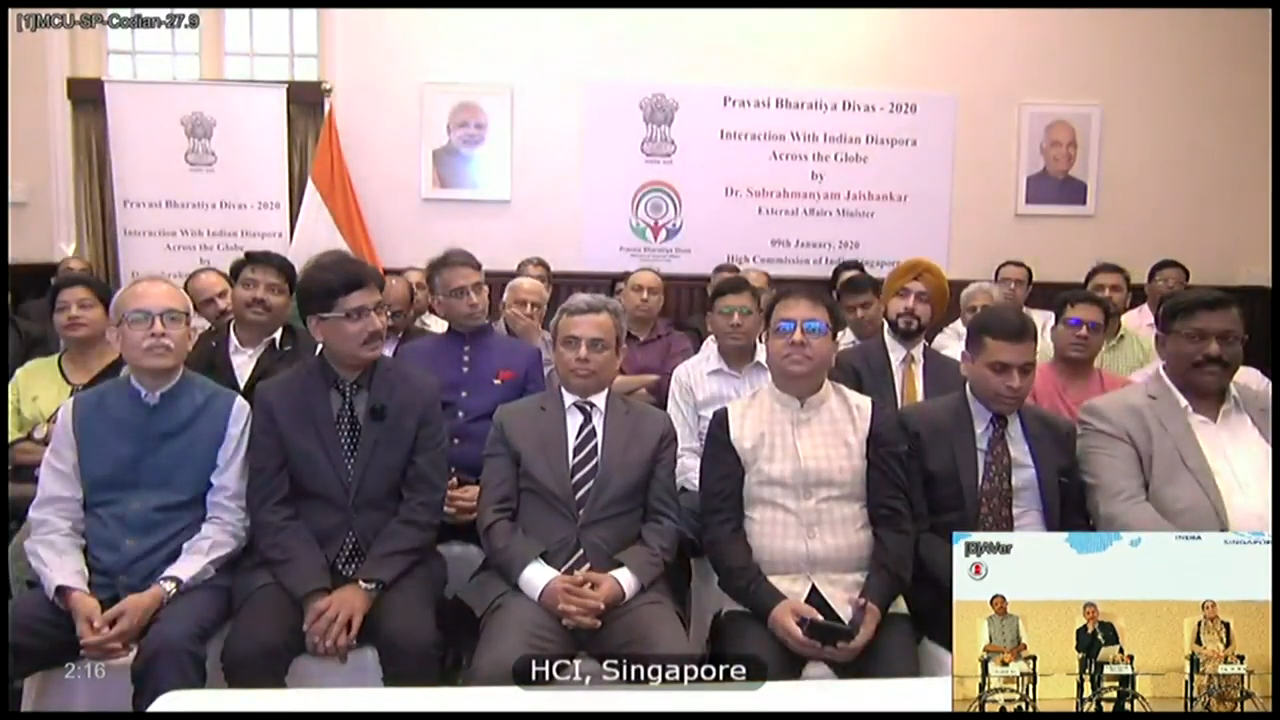 Maneesh Tripathi, Executive Chairman & Group Chief Executive Officer at Computer & Electronics Retailers SEVAK Ltd asked about the merging of the NRI investment track with the general investment track in the 2019 Budget and whether anything more could be done to facilitate investments from abroad.

Dr Jaishankar said that the country and government would like to see more investment from NRIs and PIOs as it was the ultimate “act of faith” and the government was planning to work on creating better channels for the diaspora to invest.

“The purpose for merging the PIS and FPI routes was to help the diaspora community because it was felt that as part of Ease of Doing Business, they would be able to leverage the platforms available to FPIs,” he said.

Singapore educator and co-founder of the Global Schools Foundation Atul Temurnikar asked the Minister about the richness of Indian cultural performances in Singapore and enabling more shows in India.

Dr Jaishankar, who had served as a diplomat in the Lion City, said he would approach the Indian Council of Cultural Relations to increase opportunities in the arts sector and follow the Singapore model of sponsoring cultural events. He called for collaboration on both ends to “sponsor more events in an effective manner”.

The minister said that the e-visa was a recent initiative and the government was expanding the spectrum and coverage of e-visas as well as expanding the number of air and sea ports where they were eligible.

“The bottom line is to make getting visas simple and address as many users as possible. UK is actually one of the largest users of e-visas,” he said, also calling for the visa regime in foreign countries to be eased for Indians.

The US is home to the single largest Indian-origin community of any country in the world at 4 million, and Viveik Patel, the NRI who, through a Facebook campaign, raised over USD 1 million for the families of the victims of the Pulwama terror attack, asked about transferring charitable donations from abroad to India.

“We understand the desire of the diaspora to contribute, so we’ll have to figure out a way which will ensure that the funds go where they are meant to go,” he said.

Replying to the question of Dr Thomas Abraham, the chairperson of the Global Organisation for People of Indian-origin (GOPIO) on the government’s measures to address misconceptions about the Sikh community globally, the minister said there was no general misperception on India’s part and said the government had decided to allow political refugees of Sikh-origin who had fled from India access to consular services and the option to return to India once again.

He added that the BJP government had reopened cases involving the anti-Sikh riots of 1984 and were committed to ensuring that the perpetrators of the atrocities would be brought to justice.

Conventions were held every year from 2003 until 2015, when the event was organised in India once every two years, with a different foreign consulate marking the date in the years it is not held in India.