Mamankam like the famous Kumbha Mela was a fair held once in every 12 years, based on planet Jupiter or ‘Vyaazhan’s’ orbit around the earth.

The Mela (fair) brought in  travelers from Arabia, Greece and China and was of  economic, social and political significance to the rulers of those times.

Malayalam movie Mamangam is loosely based on the 1600’s, a period when the fair underwent tragic changes after the unfair capture of Tirunaavaaya from the Vellaattiri chief by the chief of Kōzhikōde called Zamorin or Samuthiri (Ruler of the Seas).

It is really a captivating piece of history about generations of bloodbath, when the Vellattiri chiefs sent warriors to kill the Zamorin and regain the honor of conducting the festival. Photo Courtesy: Mamangam/ Twitter

Everyone knew it was a suicide mission, as the Zamorin would be present at the fair protected by thousands of armed and mounted warriors, which is why the Valluttiri clan were called ‘chavers’ (martyrs or suicide attackers).

The movie tries to capture the feel of  Mamankam with a mammoth set and scenes of trading, cultural festivals, ritual ceremonies and folk art performances as held at Tirunāvāya during the festival.

It soon moves into a display of  martial arts and military might that ends in a  long drawn bloodbath. Mammootty has stoically handled the fight scenes in a manner that belies his age of 68 years to well-deserved whistles and confetti showers in the theatre by his fans.

The movie abruptly flashes forward to 24 years later. The ‘Kutippaka’ or blood feud has continued. With many male warriors killed in attempts to kill the Zamorin it is the Vellaattiri females who now egg on a new generation of males to avenge the deaths, reflecting the matriarchal nature of Kerala society even then. 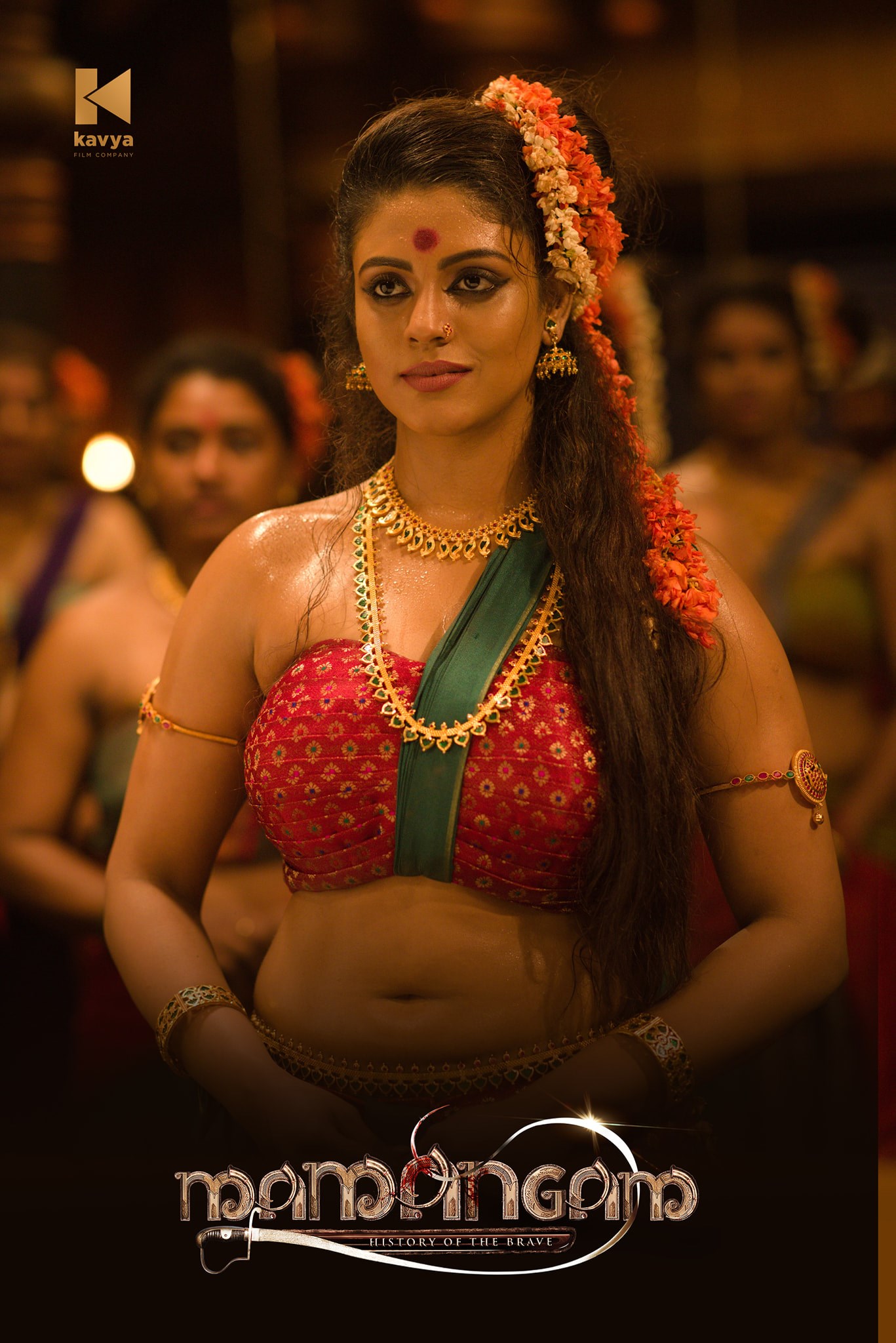 Poster from the film Mamangam

Other than the matriarchal heads of the family, the female roles are nothing to write home about, though Mamangam is the Malayalam debut of former Indian netball player Prachi Tehlan.

Actor Unni Mukundan the chosen ‘Chevar’ and his young nephew Achuthan are a sight for sore eyes, looking amazingly natural in their period costumes as well as in their martial art moves.

Achuthan who is trained in Kalaripayattu acts as 15-year old  Unni, the youngest fighter in the history of Mamankam. The taciturn uncle and the outspoken nephew are soon joined by an effeminate Mammooty, a role he essays without overdoing, before easily gliding back into the warrior avatar.

Siddique’s arrival followed by multiple flashbacks with melodramatic scenes of the brothel and the women there, slows down the pace tremendously before the interval.

The cinematography of the preparations for a Kerala mural and moving dialogues between Mammooty and Achuthan are the highlights before they set off on their quest for vengeance again.

Mammooty reappears, not just as an effeminate artist but also as an outcast believer in peace, who tries to dissuade the warriors from heading on their suicidal path but in vain.

The movie tries to stay true to history, which might actually work against it in the box office, where a final burst of fiction might have made the audience applaud.

The background music just lengthens the pace, though the lullaby by Bombay Jayashree and the Mookkutthi by Shreya Ghosal are appropriately placed.

The story is really intriguing, making you wish the screenplay and editing had been tighter. The dialogues are in archaic Malayalam, which though pleasing to the ears, is tough to grasp and tends to long monologues, which might have been more palatable in a web series than in a movie.

It is said that Sajeev Pillai the writer and original director began principal photography from Feb 2018 but quit due to differences with the producers. M. Padmakumar was roped in as the director in January 2019 and restarted the shooting from scratch.

Can’t help but wonder how the movie would have turned out had Sajeev Pillai handled the screenplay as well as directed it.

Movie Review Chhapaak: When acid is cheaper than a bottle of water