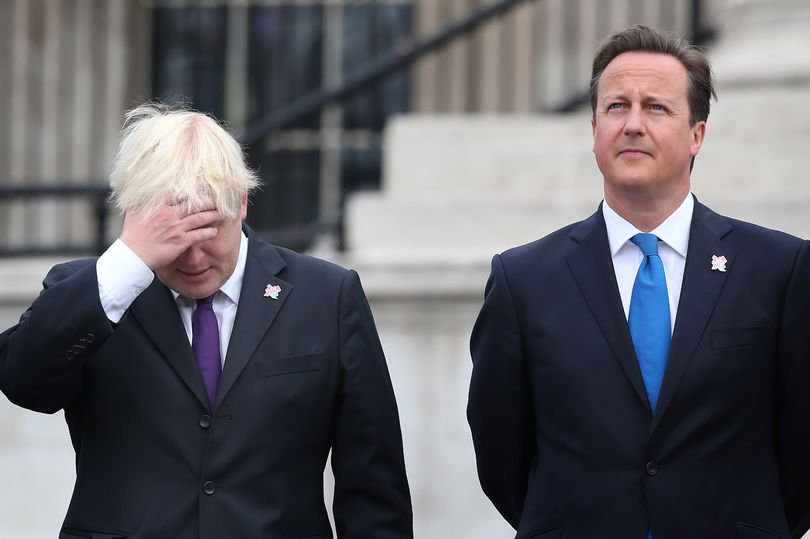 Cameron’s (right) memoirs come as the Boris Johnson-led minority government failed to block a legislation that called for an extension if no Brexit deal was reached by the October deadline. Photo courtesy: Twitter

In his memoir 'For The Record', Cameron attacked his former Conservative Party colleagues who he said shocked and betrayed him in their attacks on his then government in the lead-up to the June 2016 Brexit referendum.

He singled out Patel, who was an employment minister in his Cabinet at the time and also the Indian diaspora champion, for her attacks against his government's immigration policies. "It was the behaviour of the employment minister, Patel, that shocked me most," wrote Cameron in his book, which is serialised in The Sunday Times.

"She used every announcement, interview and speech to hammer the government on immigration, even though she was part of that government. I was stuck, though: unable to fire her, because that would make her a Brexit martyr," he said. Patel, currently one of the frontline Cabinet ministers as UK home secretary, was a prominent Brexiteer and member of the Leave campaign. She had made a series of speeches during the referendum campaign calling for a visa regime that did not favour the European Union (EU) over migrants from non-EU countries like India.

Cameron blamed the entire Leave camp for stirring up a "cauldron of toxicity" with lies about the facts and figures around immigration and what the UK's membership of the EU cost Britain. He wrote: "On May 11 [2016] they unveiled their liveried battle bus, emblazoned with the words, 'We send the EU GBP 350 million a week. Let's fund our NHS instead'. It wasn't true. As Boris rode the bus around the country, he left the truth at home. The fact that it was inaccurate actually helped the leave campaigners."

Cameron’s memoirs come as the Boris Johnson-led minority government failed to block a legislation that called for an extension if no Brexit deal was reached by the October deadline.