Indians in the United Kingdom (UK) held a protest at the Victoria Square in Birmingham over the weekend against anti-India propaganda on the Kashmir issue even as Pakistani overseas organisations approached the European Parliament. 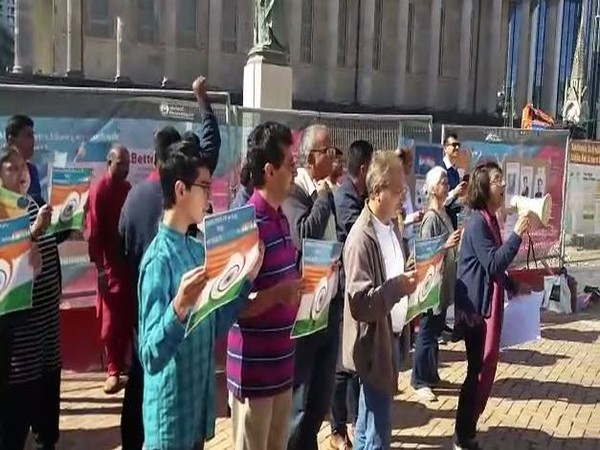 About 40 demonstrators carrying Indian flags showed their support for the move by the Indian government to abrogate Article 370 that granted special status to Jammu and Kashmir. Photo courtesy: Twitter/@TheDispatch

The protest was organised by the Indo-European Kashmir Forum (IEKF) and Hindu Council UK (HCUK). About 40 demonstrators carrying Indian flags showed their support for the move by the Indian government to abrogate Article 370 that granted special status to Jammu and Kashmir.

The protestors raised slogans of 'Bring back Pandits', in support of the return of Kashmiri Pandits to the Valley, and carried placards that read, ‘Abrogation of Article 370 and 35A will integrate Kashmir with India’.

Meanwhile, the Pakistani organisation Friends of Kashmir group in the European Parliament (EP) recently held an event to discuss the situation in the valley with the Members of the EP, during which neutral observers noted bias on the part of their pitch to the parliament.

It was noted that the situation in Jammu and Kashmir is steadily returning to normalcy, while the propaganda against India is proving to be exaggerated and unfounded.

"Jammu and Kashmir, and Ladakh remain free from violence or abuse. The heavy security presence in the valley is slowly being reduced, but remains in place to maintain law and order, and provide a sense of security to the people against the threats of terrorism that have been made by Pakistan," an EP report said.

It added that it is unfortunate on the part of Pakistan to carry out the malicious propaganda campaign on the situation in Kashmir.

Jammu and Kashmir India in UK