“Cricket has given me everything I have… this game taught me how to fight, how to fall, to dust myself off, to get up again and move forward.” – Yuvraj Singh

Words that perhaps most accurately sum up the career of one of India’s most aggressive batsmen, a genuine all-rounder and one of the best fielders India has produced, Yuvraj Singh. 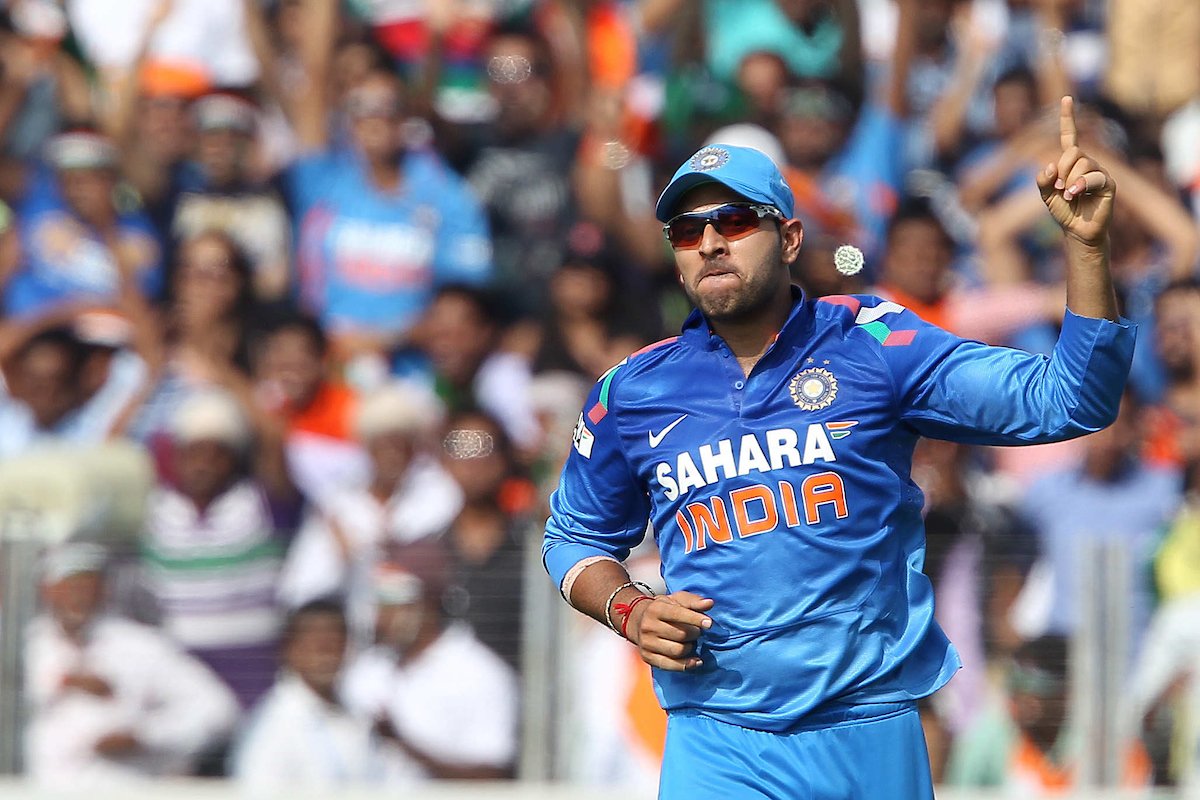 winner, hitter of six sixes in an over - Yuvraj brought a sense of excitement, swagger and ball smashing to the game well before the big hitting, glamorous age of the Indian Premier League (IPL).

Cricket was never Yuvraj’s sport of choice. Young Yuvi wanted to follow his heart’s passion – roller-skating. But his father Yograj Singh, a former cricketer, had other ideas. Yograj had dreams, dreams of winning the World Cup for India, dreams that went unfulfilled in his youth, and therefore dreams he wished to live through his son. And so, he pushed Yuvraj towards cricket, aggressively so (reportedly once even throwing away a medal that Yuvraj won in a roller-skating competition) - something that caused lifelong friction between father and son.

Cricket may not have been Yuvraj’s first love, but there was no question that he possessed a raw, natural talent for the game. His Man of the Tournament performance in the Under-19 World Cup in 2000, which India won under the captaincy of Mohammad Kaif, earned him a call-up to the national squad for the ICC KnockOut Trophy that same year. 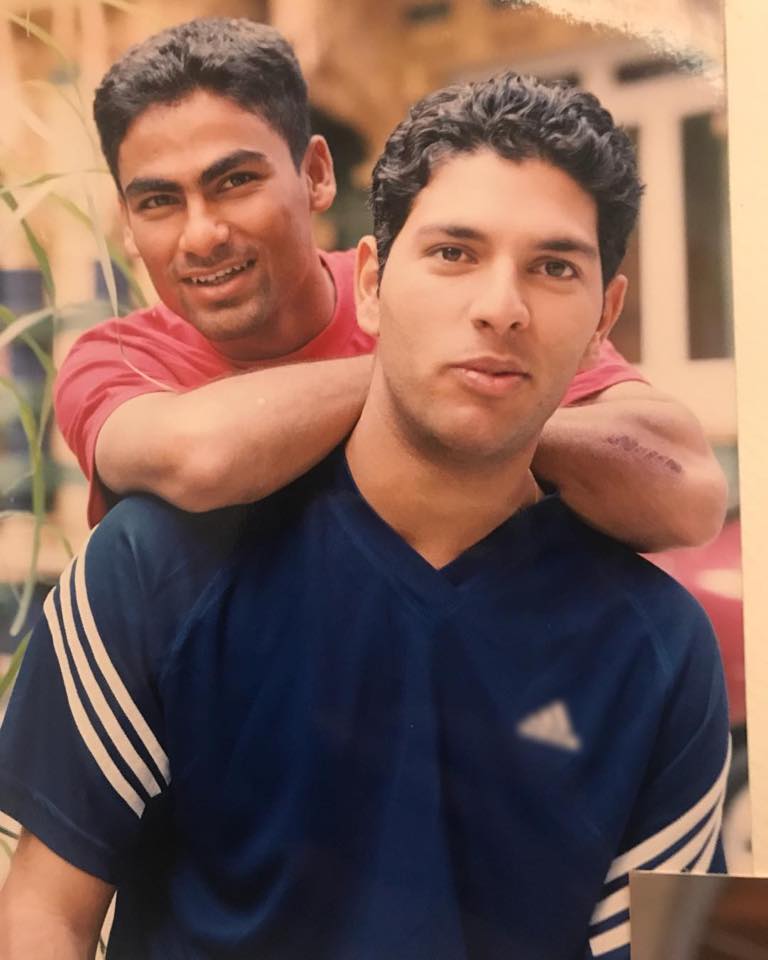 Speaking to Connected to India, Kaif said, “My favourite memory of Yuvi is of a knock he played in the Under-19 World Cup in Sri Lanka. It was the semi-final vs Australia and they had posted a big total... The way Yuvi was smashing the Aussie bowlers was unbelievable. Johnson was bowling 140+ and I had never seen an Indian batsman play pace as comfortably as Yuvi played that day. We in India were never used to seeing such flamboyant stroke makers at the under 19 level. The world only got to know of Yuvi when he made his India debut, but I saw a glimpse of him during that semis that told me, he was a great player in the making.”

Having made his international debut in a pre-quarterfinal match against Kenya 19 years ago, Yuvraj went on to play 304 ODIs, 58 T20Is and 40 Tests for the country.

“It was such a love-hate relationship with the sport. In retrospect, I don’t think I hated this game because of the love I have for it today, which will remain constant until the end of life,” says Yuvraj.

Congratulations on a wonderful career playing for the country paji. You gave us so many memories and victories and I wish you the best for life and everything ahead. Absolute champion. @YUVSTRONG12 pic.twitter.com/LXSWNSQXog

Whether he loved cricket or not, the game certainly loved him. A look at his career stats shows just how crucial he was to the Indian ODI team:

It wasn’t just his batting prowess that made him a star - Yuvraj and Kaif were greatly responsible for changing the face of Indian fielding in the 2000s. India’s catching and ground fielding, a crucial part of the modern game, was taken to a new level by these two youngsters.

One of the greatest match-winners in the history of the game,a fighter who built an extraordinary career through difficult challenges & came out a winner every time-We all are so proud of you #YuvrajSingh , u can be very proud of what u have you done for our country @YUVSTRONG12 pic.twitter.com/w4wUe31De0

Yuvraj Singh was also more than just a handy spinner. His tally of 148 international wickets elevated him from hard-hitting batsman to valuable all-rounder.

Yuvraj played best under pressure, indicated best by his famous six sixes off a Stuart Broad over in the inaugural ICC World Twenty20 in 2007. Andrew Flintoff had spent the previous over chattering at him and getting under his skin. Yuvraj’s response was simple - let the bat do the talking. He ended up scoring the fastest Twenty20 fifty, off just 12 balls - a record that still holds.

One of Yuvraj’s regrets through his career is perhaps his failure to establish himself in Test cricket. Dominant in white ball cricket, he struggled in the longer format of the game, not in small part due to the fact that India’s test legends were in fantastic form during this period. He scored just 3 Test tons in 40 matches (all three against Pakistan), and was never really able to make a space for himself in the Indian test team, having last played a test match as far back as December 2012.

Two moments stand tall in Yuvraj’s illustrious career – his performance in the 2002 Natwest Trophy and in the 2011 ICC World Cup. 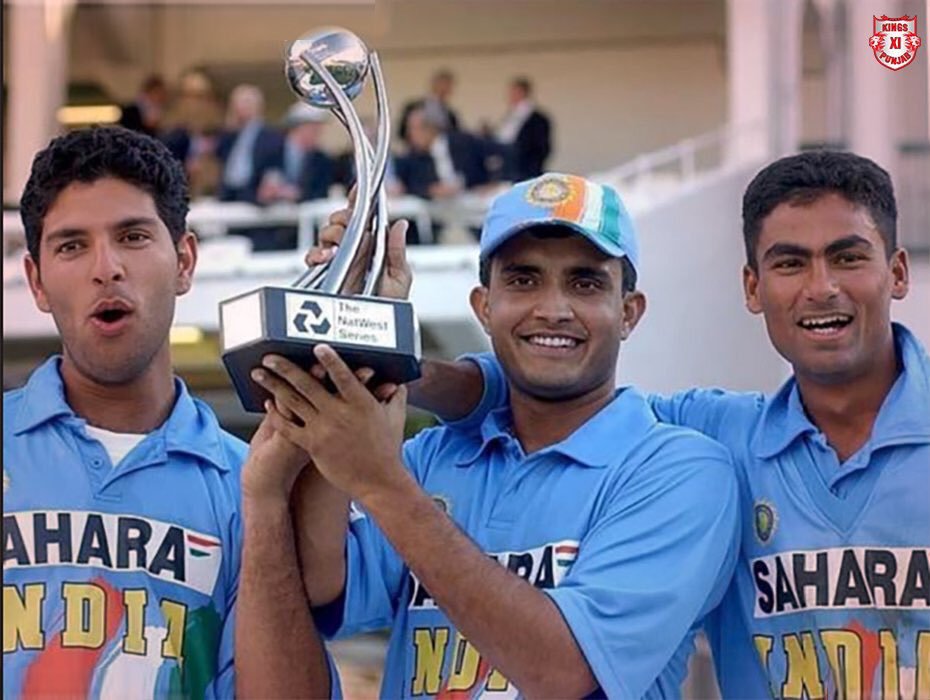 An ecstatic Mohammed Kaif and a bare-chested Sourav Ganguly celebrating on the Lord’s balcony are memorable images from the Natwest Trophy final. But none of that would have been possible without Yuvraj’s masterful 69 off 63 balls, which along with Kaif’s (87*) performance, brought India the trophy – their first win in the final of an ODI tournament since 2000, after nine consecutive defeats.

“Yuvraj Singh has inspired a generation to pick up the bat and play a very aggressive, flamboyant brand of cricket… Talent of course will take you that far, but afterwards it’s all about grit and determination. That’s what he has given to Team India,” former India cricketer Aakash Chopra told Connected to India.

Yuvraj’s crowning achievement came in 2011, when India won the ICC World Cup at home, after a gap of 28 years. If there ever was a dream run in a tournament, it was this. 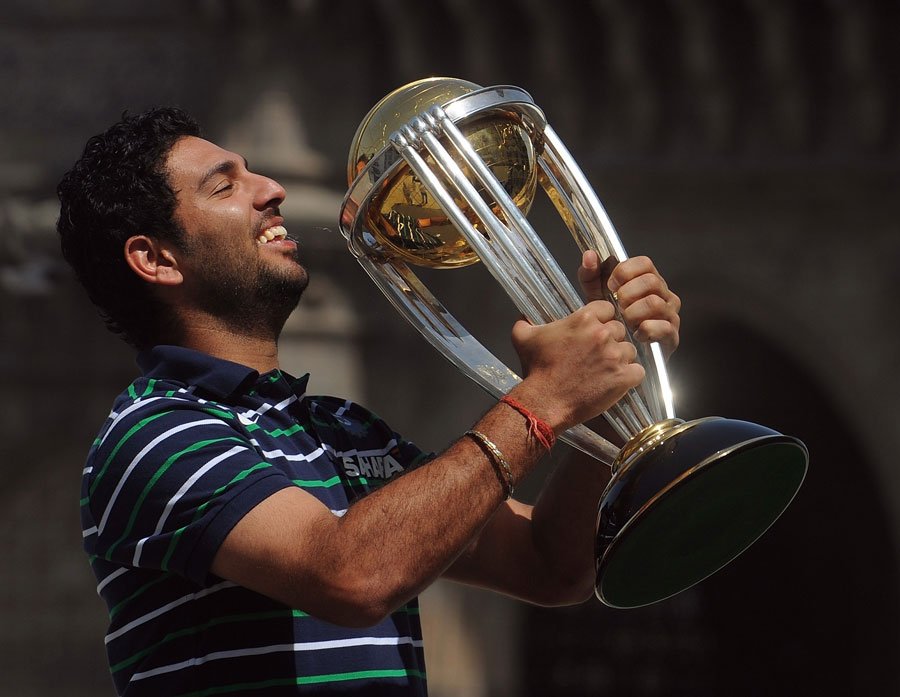 Yuvraj scored 362 runs including one century and four fifties, took 15 wickets, won four Man-of-the-Match awards and was also awarded the Player of the Tournament. And when he put his hands on the World Cup trophy, it was the fulfillment of the dreams of not just droves of Indian fans but, perhaps more crucially for Yuvraj, the fulfillment of his father’s dream - the dream that had brought Yuvraj into the game of cricket in the first place.

What a fantastic career you have had Yuvi.
You have come out as a true champ everytime the team needed you. The fight you put up through all the ups & downs on & off the field is just amazing. Best of luck for your 2nd innings & thanks for all that you have done for 🇮🇳 Cricket.🙌 pic.twitter.com/J9YlPs87fv

After the high of the win came the lowest point in Yuvraj’s life. He had struggled with breathing difficulties, nausea and bouts of vomiting blood throughout the World Cup and soon after the tournament, he was diagnosed with a Stage1 tumour in his left lung.

“It was like touching the sky and then falling down at light speed and hitting the ground hard. All this happened so quickly and that too when I was at the peak of my career,” says Yuvraj.

His cancer diagnosis and subsequent rounds of chemotherapy put into perspective just what he had battled throughout his phenomenal run during the World Cup.

“There is one image (that comes to mind) and that image is from India’s quarter-final against Australia in the 2011 World Cup. He’s down on his knees, there is a lot of dirt on his shirt. He’s got his bat in his hand and he’s just very, very happy after India won the game. That image is very powerful because all of us thought that of course it was a good innings...But then when you realise what he was fighting, it was not just Australia, he was also fighting a deadly disease. So then suddenly that image becomes even more iconic and more powerful,” Aakash Chopra told Connected to India. 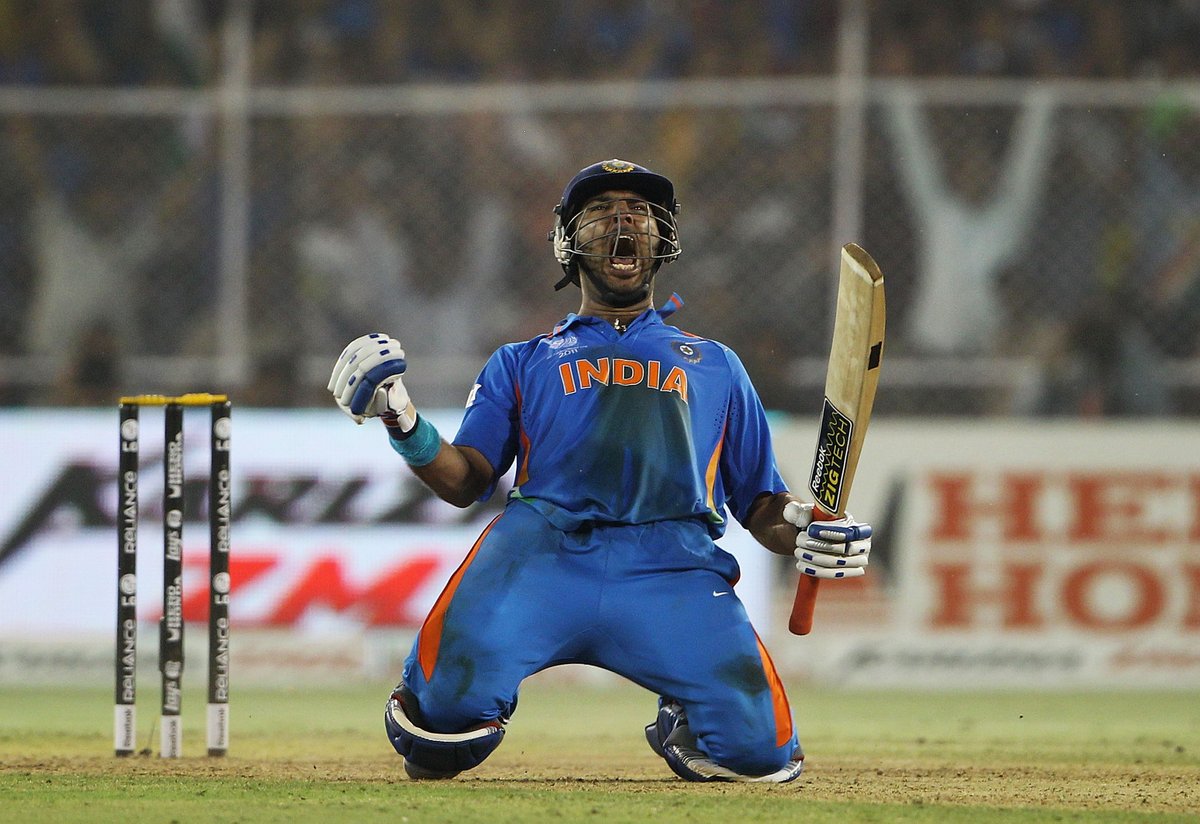 With his biggest pillar of support, his mother, Shabnam Singh by his side, Yuvraj flew to the US for cancer treatment and was declared to be in remission a year later. 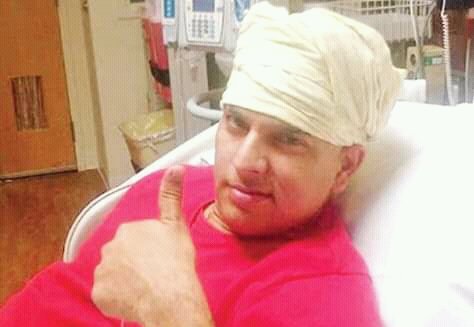 He was named in the 15-man squad for the 2012 ICC World Twenty20 but although he ended the tournament as the highest wicket-taker for India, he could not find the magic of old with the bat.

His career never really went back to the height of its heyday after his recovery from cancer and soon Yuvraj was no longer being picked in India’s ODI squads. He was released by Kings XI Punjab ahead of the 2019 IPL auction and bought by Mumbai Indians at his base price after going unsold in the main round of buying.

“I have failed more times that I have succeeded but I never gave up and will never give up till my last breath, and that’s what cricket taught me. I gave my blood and sweat to the game, once I got into it, especially when it came to representing my country.” – Yuvraj Singh

On June 10, Yuvraj Singh announced his retirement from all cricket, including the IPL, with his mother and his wife Hazel Keech, who he married in 2016, by his side. 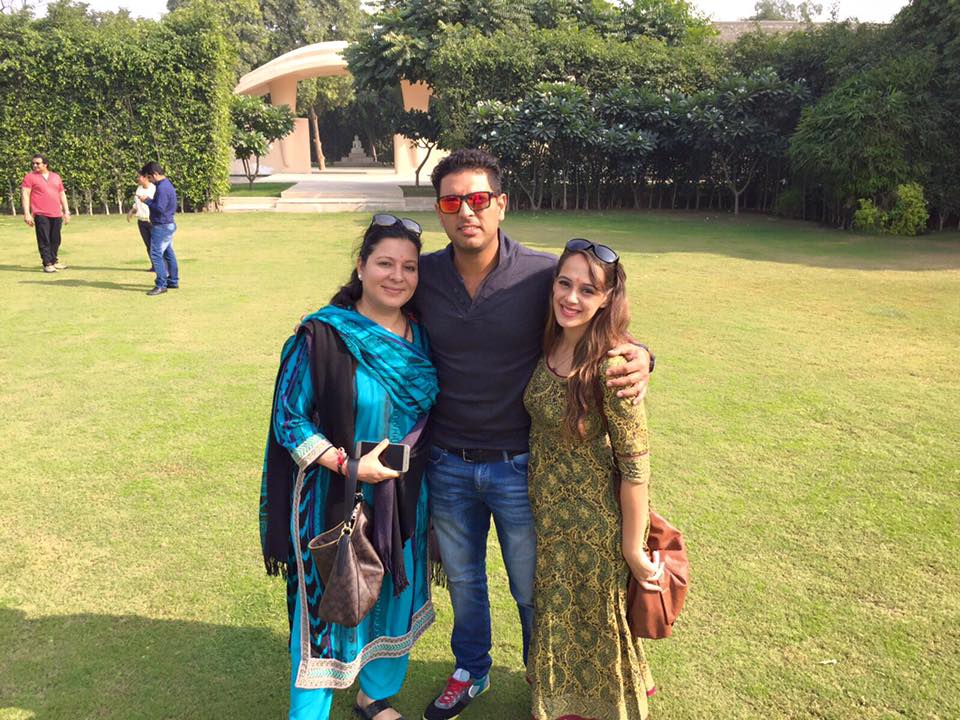 “I spoke to him and the demons inside as a young kid came out in that conversation… And it was a very peaceful moment for me to have that closure and have that chat with him, because I had never had that chat with him in the last 20 years," Yuvraj said on Monday, while announcing his retirement.

Tributes poured in from around the world, from cricketers, other sportspersons, politicians and actors alike, celebrating his illustrious career.

My Warrior Prince - A true fighter on and off the field.. your stories will forever live on.. love always brother @YUVSTRONG12 #sixerking #Brother ❤️❤️❤️❤️🤗🤗 #Legend pic.twitter.com/YN7580q8bY

Players will come and go,but players like @YUVSTRONG12 are very rare to find. Gone through many difficult times but thrashed disease,thrashed bowlers & won hearts. Inspired so many people with his fight & will-power. Wish you the best in life,Yuvi #YuvrajSingh. Best wishes always pic.twitter.com/sUNAoTyNa8

Dear Yuvraj Singh, you may have retired from the competitive cricket game but you will remain a cricketing icon for every Indian & millions across the globe. What a batsman, bowler & fielder you have been!
We are proud of you👍
I extend my best wishes for your future endeavours! pic.twitter.com/mYc4iUgH21

You don’t know what you got till its gone. Love you brotherman You deserved a better send off. @YUVSTRONG12 pic.twitter.com/PC2cR5jtLl

You are a hero and a legend which the world knows bout - but the remarkable human that you are,and luckily we get to knw u in this next phase too..its an end of an era, but the beginning of so much more with the next chapter in ur life motuuu.. BEST always. @YUVSTRONG12 ❤️ pic.twitter.com/57ExW2ddtU

Yuvraj is now aiming to continue his work with underprivileged cancer patients through his organization YouWeCan and hopes to play in Twenty20 leagues outside India.

#5baje5minute trends as celebrities all over India applaud frontline workers