With the ICC World Cup 2019 in full swing, let’s walk down memory lane to the last time the tournament was held in England; 20 years ago, when India was the team in sky blue, not England. 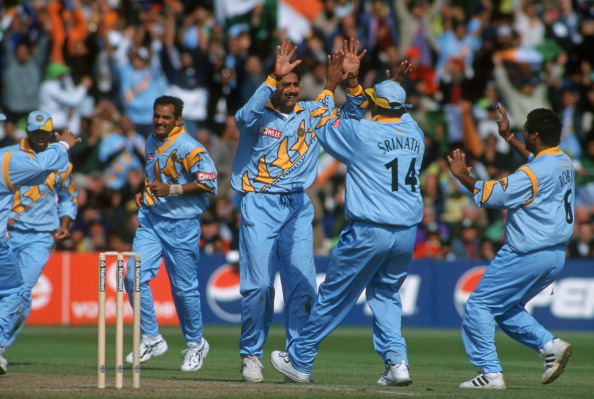 England was hosting the World Cup after a gap of 15 years since Kapil Dev had led an Indian side to its maiden World Cup victory in 1983. Mohammed Azharuddin was the Indian skipper and Sachin Tendulkar, Sourav Ganguly and Rahul Dravid were in the prime stages of their careers.

The 1999 World Cup stands out more for individual brilliance than team efforts in India’s cricketing history, with the Men in Blue ending up with the maximum number of centurions in the tournament. Rahul Dravid scored two, while Tendulkar, Ganguly and Ajay Jadeja scored one century each.

On the other hand, shock losses to Zimbabwe, South Africa and New Zealand during the course of the tournament led to the Indian team catching an early flight back home.

In 1999, the ICC Cricket world cup was played in England. we have a photo of the team captains from the nations that competed at the world cup.
Aasif Karim captained the Kenyan team. pic.twitter.com/EXWkSN75ZL

India’s convincing victory over the Proteas yesterday in a replay of their first World Cup match from 1999 highlights the contrasting fortunes of both teams as well as the fact that the shoe is truly on the other foot 20 years on. They say the burned hand teaches best; in that case, India’s 1999 campaign definitely has quite a few lessons for the current crop of Indian players.

India got off to a horrendous start in 1999, losing to tournament favourites South Africa and, more shockingly, Zimbabwe in their first two matches. Despite Ganguly and Dravid’s brisk knocks against South Africa and the earpiece controversy involving Hansie Cronje and Allan Donald, the Proteas emerged victorious. While against Zimbabwe, a shocking tail collapse had India snatch defeat from the jaws of victory.

Backs to the wall 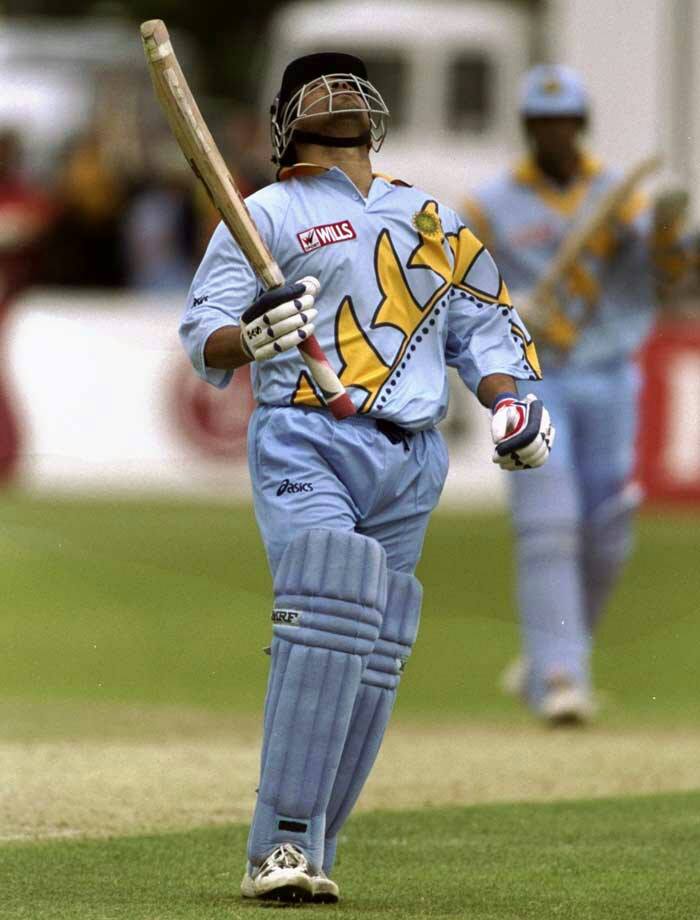 The start of the reversal of India’s fortunes undoubtedly came during the Kenya match. Facing early elimination if they lost any of their remaining matches, the team was bolstered by the return of Sachin Tendulkar to the side, three days after his father’s passing. In one of his most emotional knocks, the Master Blaster scored an unbeaten 140 and put on a record 237-run unbeaten partnership for the third wicket with Rahul Dravid (104*), with India finishing at 329/2 in their 50 overs, ensuring a comfortable 94-run victory.

If the Kenya match was a much-needed shot in the arm, the game against Sri Lanka was the Indian team at its best. After the early loss of opener S Ramesh, Ganguly and Dravid proceeded to tear the Sri Lankan bowling attack to pieces. By the time the next wicket fell, India had amassed 324 runs, with both Ganguly (183 off 158 balls) and Dravid (145 of 129 balls), notching up their highest ODI scores at that point.

The epic partnership between Sourav Ganguly and Rahul Dravid against Sri Lanka in Taunton in 1999 was voted by you to progress to the next round of @bira91's @cricketworldcup Greatest Moments! pic.twitter.com/7SLHsi3SEM

The pair contributed 318 out of India’s total of 374 runs. This is the second-highest partnership for the second wicket in a World Cup and third-highest for any wicket in ODI cricket. The target proved too much for the defending champions and veteran all-rounder Robin Singh’s 5/31 was the icing on the cake of the Men in Blue’s 157-run win.

Ushering the hosts out

Fresh off the high of their back-to-back wins, India were looking to ride their recent run of form into the Super Sixes by knocking hosts England out of the cup.

After two scintillating shows, the Indian batsmen crawled to 232/8 in their 50 overs built on a solid half-century by the ever-dependable Dravid, who was having the debut tournament of his dreams.

Skittling England out for 169 in a rain-hit match ensured India’s progress to the next stage.

After their loss in the first Super Six match against Australia, India once again found themselves in a do-or-die situation. Against Pakistan, the rivalry between the two nations had never been so intense, with the Kargil conflict casting a pall over the cricket pitch.

India was also looking to maintain its World Cup supremacy over its archrivals. Before this, Pakistan and India had played each other twice in the World Cup, and India had won both times.

India elected to bat first and Tendulkar’s 45, another fine innings from ‘The Wall’ Rahul Dravid (61) and Azharuddin’s fifty led India to 227/6.

Venkatesh Prasad led India’s bowling, ripping through the Pakistan top order with figures of 5 for 27. Pakistan, all-out for 180, suffered their third defeat at the time to their neighbours in a World Cup. 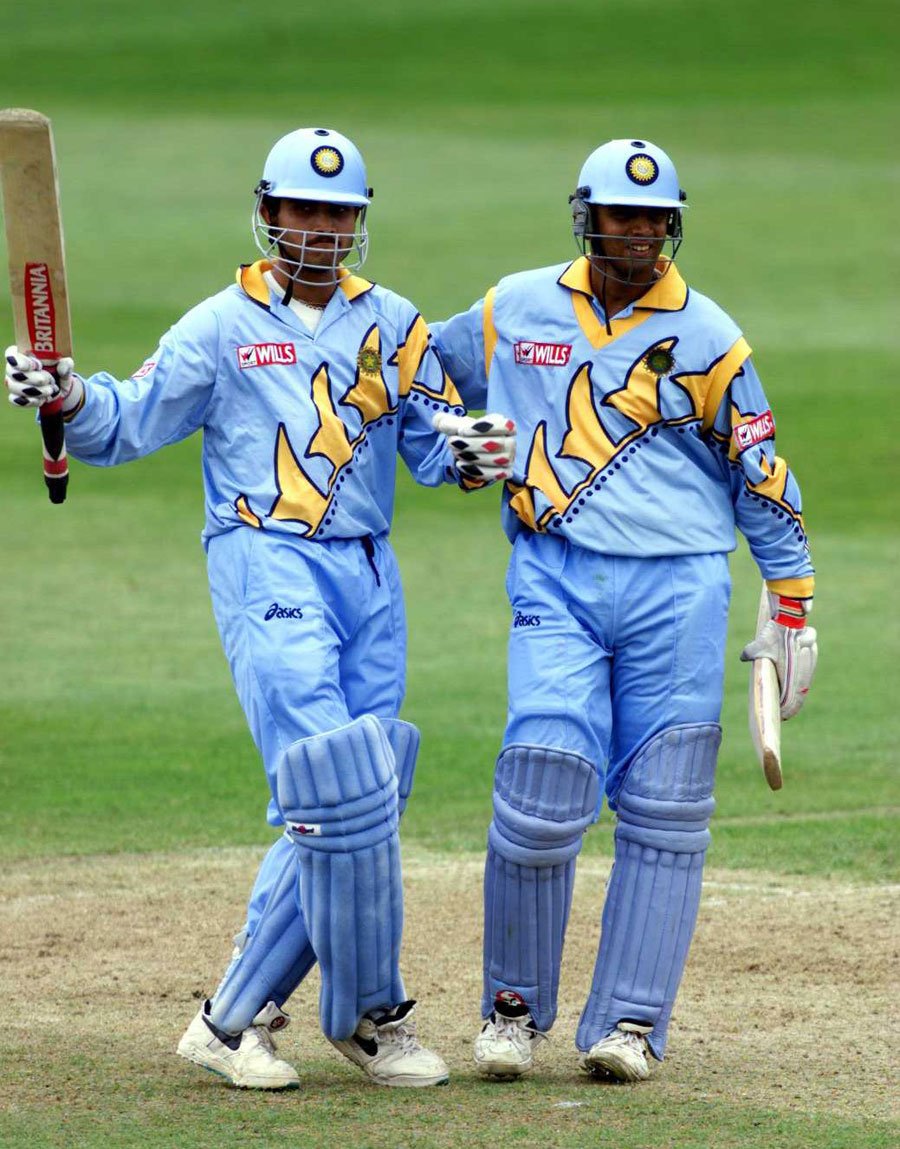 The Men in Blue ended up with the most centurions in the tournament. Rahul Dravid scored two, while Tendulkar, Ganguly and Ajay Jadeja scored one century each. Photo courtesy: Twitter/@OpIndia

Carrying on the torch

India’s loss to New Zealand in their final Super Six match saw them crashing out of the 1999 World Cup. Since then, India finished as runners-up in 2003, had a horrific campaign in 2007 and tasted World Cup glory once again in 2011. In the ongoing 2019 edition, millions of cricket fans will be rooting for Kohli’s boys to bring the cup home for a third time.