Ranbir Kapoor and Katrina Kaif may have separated the ways, but they will soon be seen sharing the screen space in 'Jagga Jasoos'.

The 2-minute trailer of the film was released in December garnering rave reviews by fans and critics alike. The story revolves around Ranbir's journey to find his missing father in between he meets Katrina and soon things take a turn. The trailer gives a feel of a jungle safari with hardly any dialogues, still it keeps you hooked to your screens.

Photos galore
'Jagga Jasoos', which will hit cinemas on April 7, 2017 is already making waves in the media with movie stills surfacing every now and then. The makers have recently released a still from the film featuring Ranbir Kapoor and Katrina Kaif in an animated mode. The lead pair can be seen imitating each other's pose against a Moroccan marketplace backdrop. 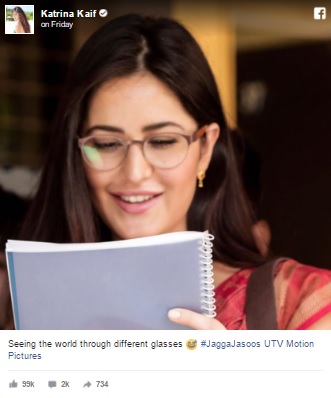 In another case, one of the fan clubs of Katrina had posted a picture of the South Africa shoot of the film. In the still, Ranbir and Katrina can be seen riding a bike.

On Friday, January 27, Katrina herself tweeted her picture from the film with a message, "Seeing the world through different glasses."

Katrina's poetic side
Jagga Jasoos has been in news since the conception. Not only because it stars the hit pair Ranbir-Katrina, but also because the couple broke during the filming of the movie. After much delay, the movie will now see the light of the day in April. Katrina while promoting the film on social media took to Facebook to share this, "I've seen fire and I've seen rain, seen sunny days that I thought would never end...... Jagga the journey is on. #JaggaJasoos UTV Motion Pictures #AnuragBasu #RanbirKapoor."

Separate promotional drive
Jagga Jasoos is Ranbir-Katrina's fourth film together after 'Ajab Prem Ki Ghazab Kahani', 'Raajneeti' and 'Bombay Talkies'. The only difference this time is that the couple is no more together delaying the release of the film. 'Jagga Jasoos' got delayed by six months because of the actors' differences.

To avoid more such delays and controversies, director Anurag Basu has apparently come up with a clever plan to promote the film. As per the plan, the lead pair will not come face to face with each other.

Will the separate promotion strategy work? Well, we would have to wait and watch!