The Republic Day was celebrated with much fanfare and patriotic fervour at various Indian missions spread across the world. Members of Indian diaspora enthusiastically participated in the various events to mark the R-Day and show their patriotic streak. 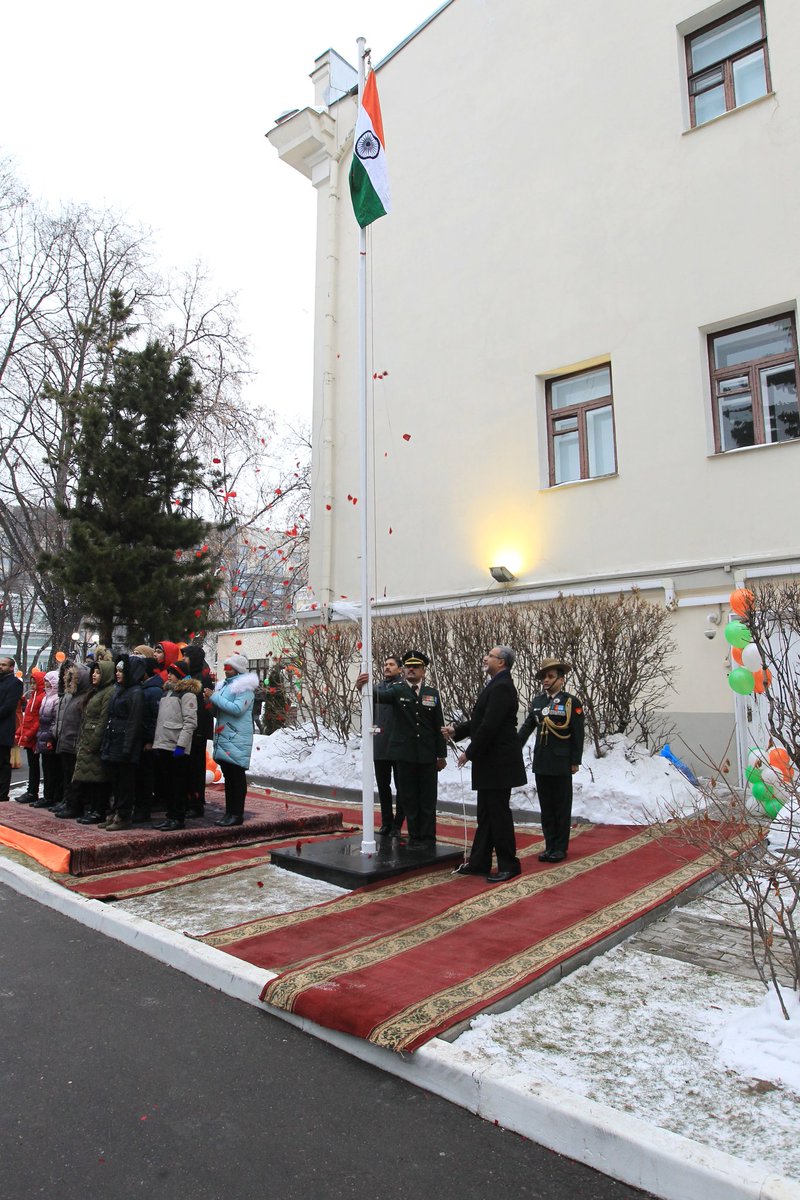 About 500 Indian citizens, people of Indian-origin and Russians celebrated Republic Day at the Indian embassy in the Russian capital city of Moscow.

#70thRepublicDay of India was celebrated in Moscow today. The celebration included a cultural performance by the children from Embassy of India School.#RepublicDay2019 pic.twitter.com/uIo6bYK5tW

Venkatesh Varma, Indian Ambassador to Russia, unfurled the national flag, followed by the singing of the national anthem. The ambassador read out President Ram Nath Kovind's address to the nation. The event also included a cultural performance by the children from the Embassy of India School in Moscow. 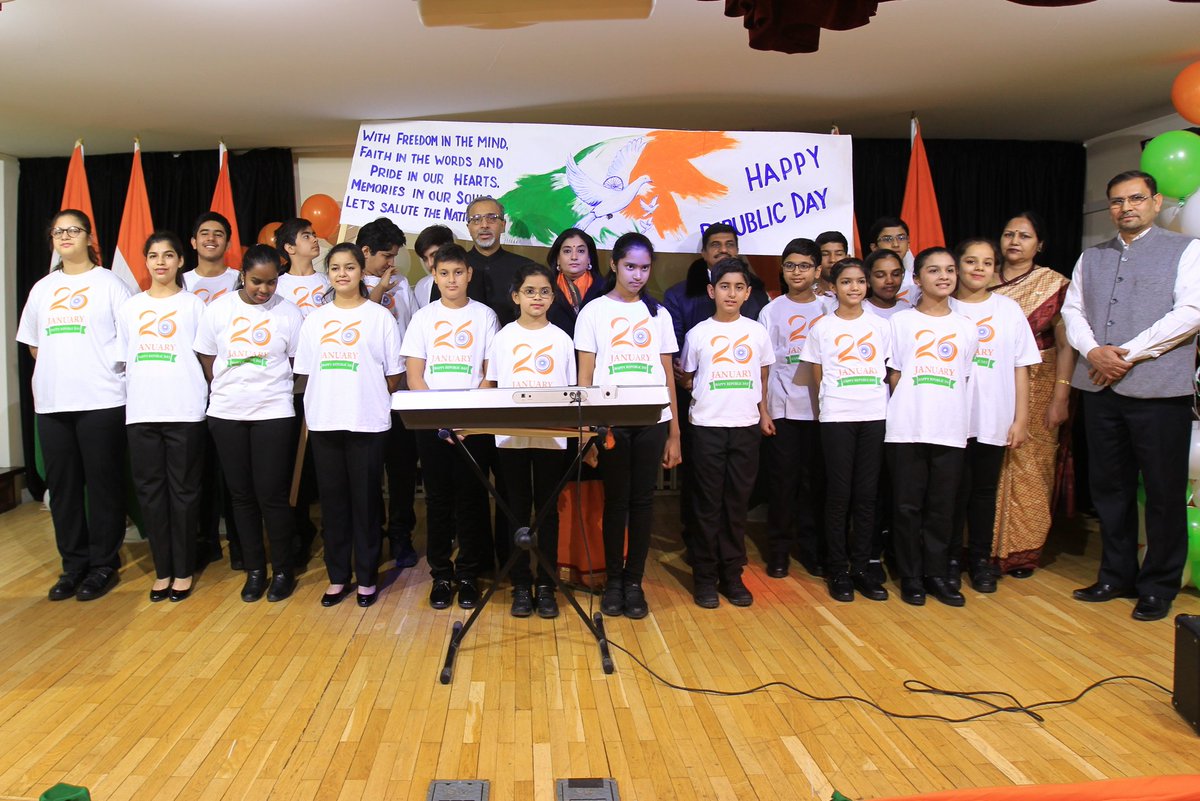 Children from the Embassy of India School presenting a cultural programme in Moscow on the occasion of Indian Republic Day. Photo courtesy: Twitter@IndEmbMoscow

'Rossiskaya Gazeta’, a widely circulated newspaper in Russia - brought out a special supplement on India in cooperation with the Indian Embasy to mark the occasion. The publication contained articles, providing insight into the special and privileged strategic partnership between India and Russia. 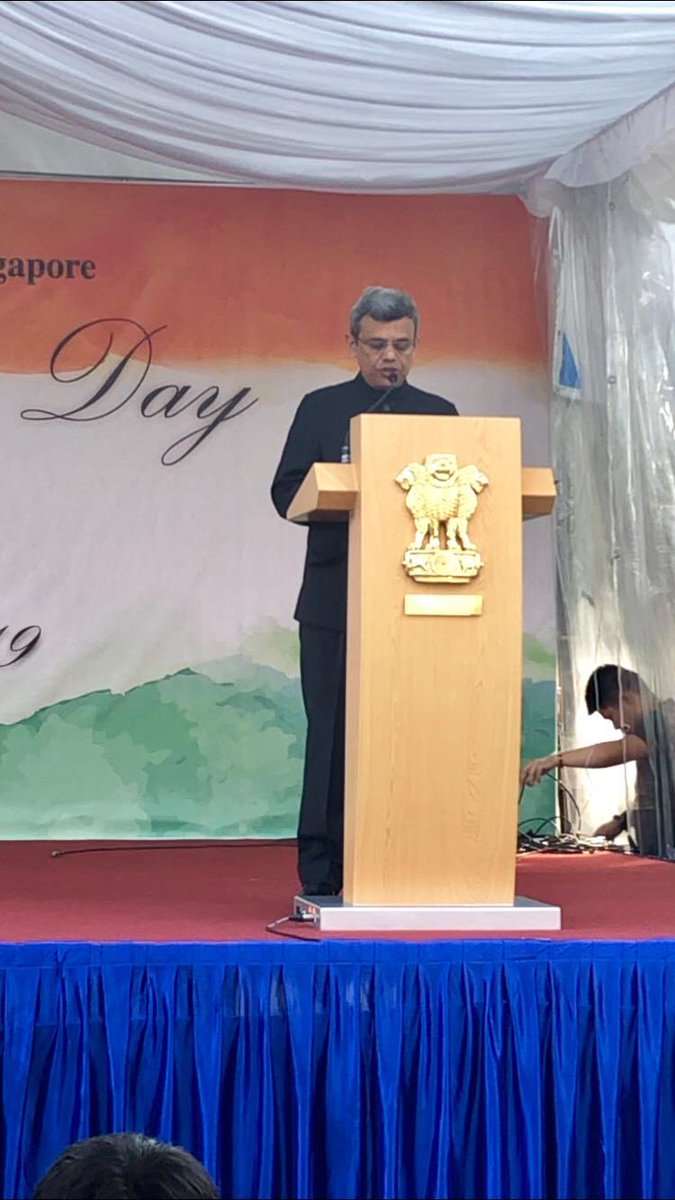 “An excellent cultural performance by children from seven Indian school and Indian refreshment completed the festive atmosphere,” the mission posted on Twitter. 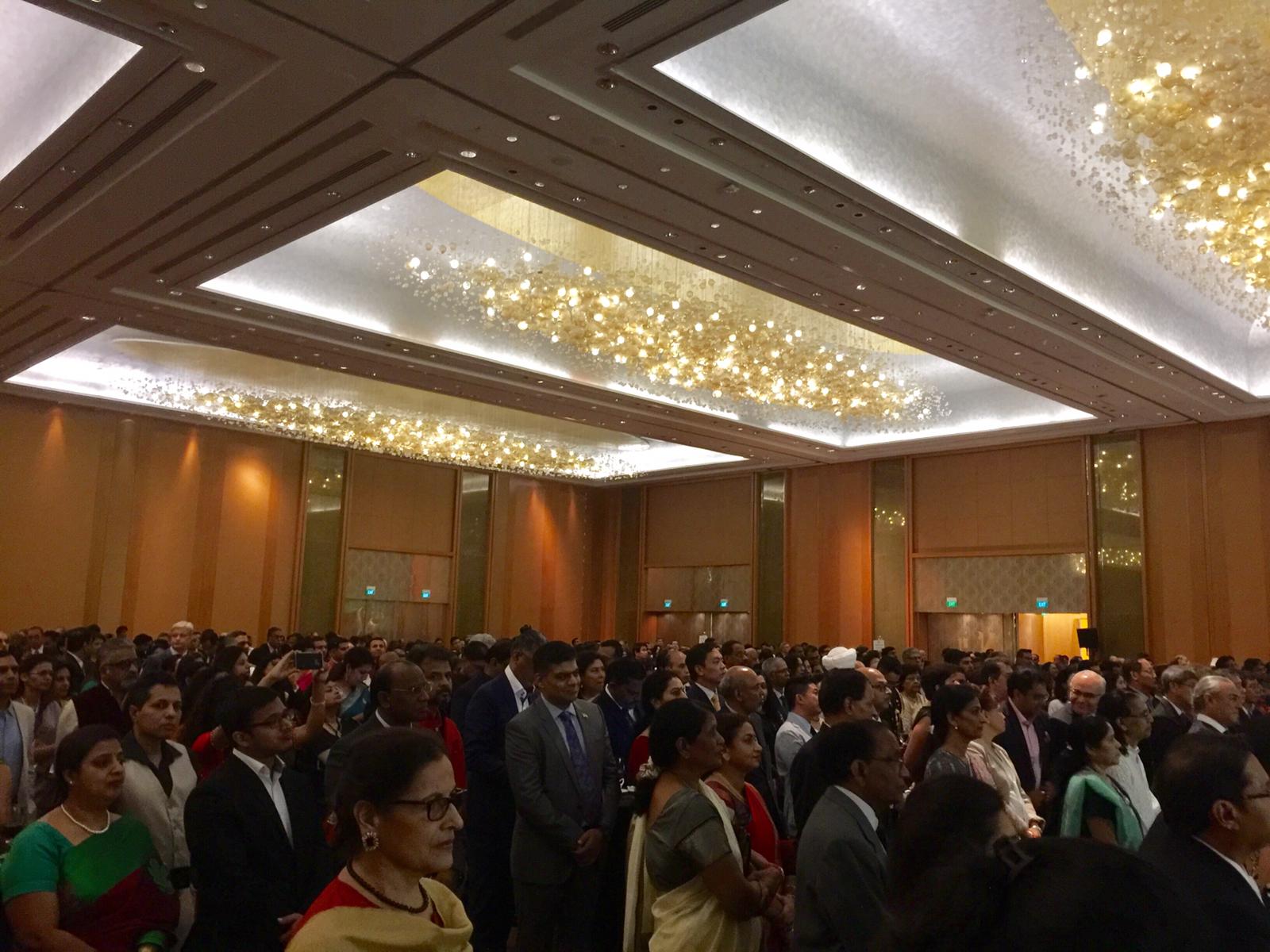 Earlier, over 1,500 people attended the Republic Day reception at Marina Bay Sands on January 25. HE Jawed Ashraf, Indian High Commissioner to Singapore hosted the event and Gam Kim Yong, Minister of Health was the Guest of Honour.

Singapore's President Halimah Yacob extended her warm congratulations to Indian President Ram Nath Kovind on the Republic Day and reflected on the close relationship between Singapore and India.

Prime Minister of Singapore Lee Hsien Loong conveyed his warm wishes to Indian Prime Minister Narendra Modi on the celebration of Republic Day and congratulated India on the great strides she has taken in the country’s development.

Republic Day was also celebrated with patriotic fervour in the US. A large number of eminent Indian Americans gathered at the Consulate General of India in the US city of Houston early on Saturday morning.

Anupam Ray, Consul General hoisted the national flag. He paid tributes to the Indian soldiers who guard the borders in extreme conditions as the consul general and his wife welcomed Indian Americans and others for the flag-hoisting ceremony. 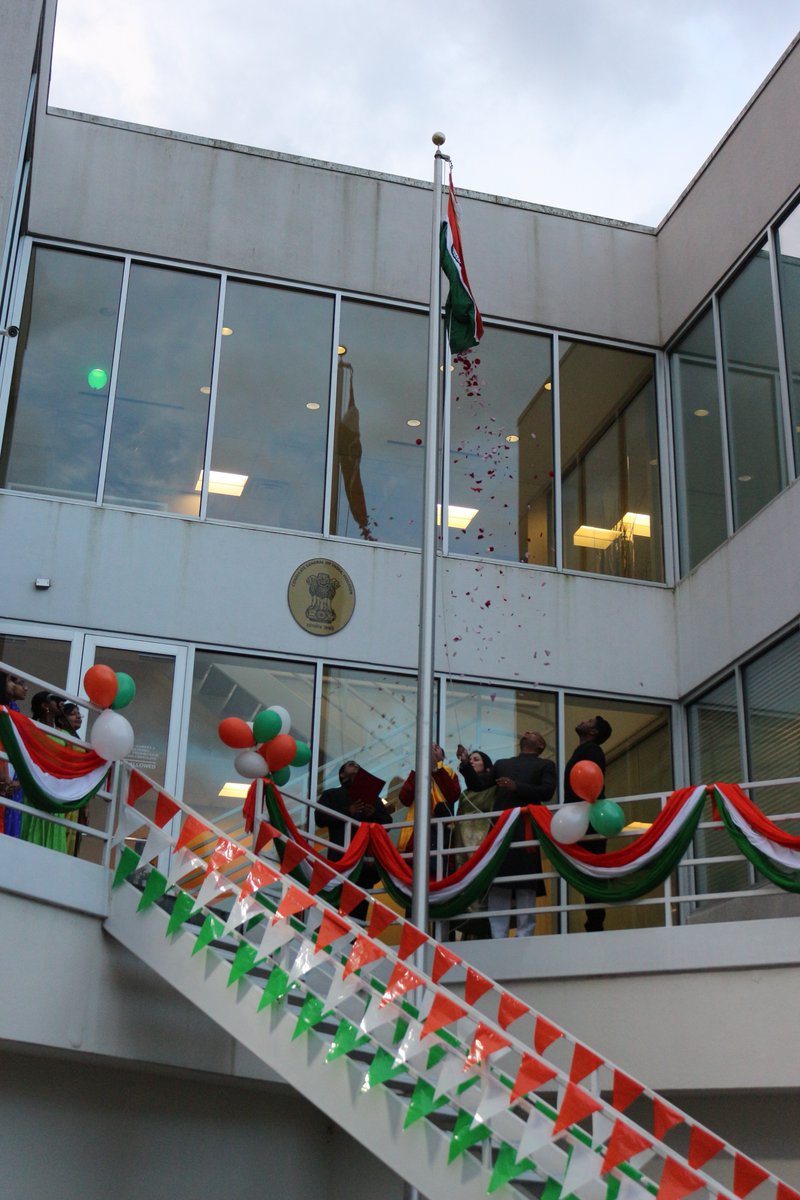 Members of the US House of Representatives, Pete Olson and Ford Benty County Judge, KP George were among those who attended the event.

Republican Congressman, Olson clad in Indian attire, greeted everyone present on the Republic Day, saying, “The US is proud of great friendship with India and today we celebrate India becoming a Republic and it signifies the special bond between the world’s oldest and largest democracies. This bond encompasses shared values, commercial trade and mutual security.” 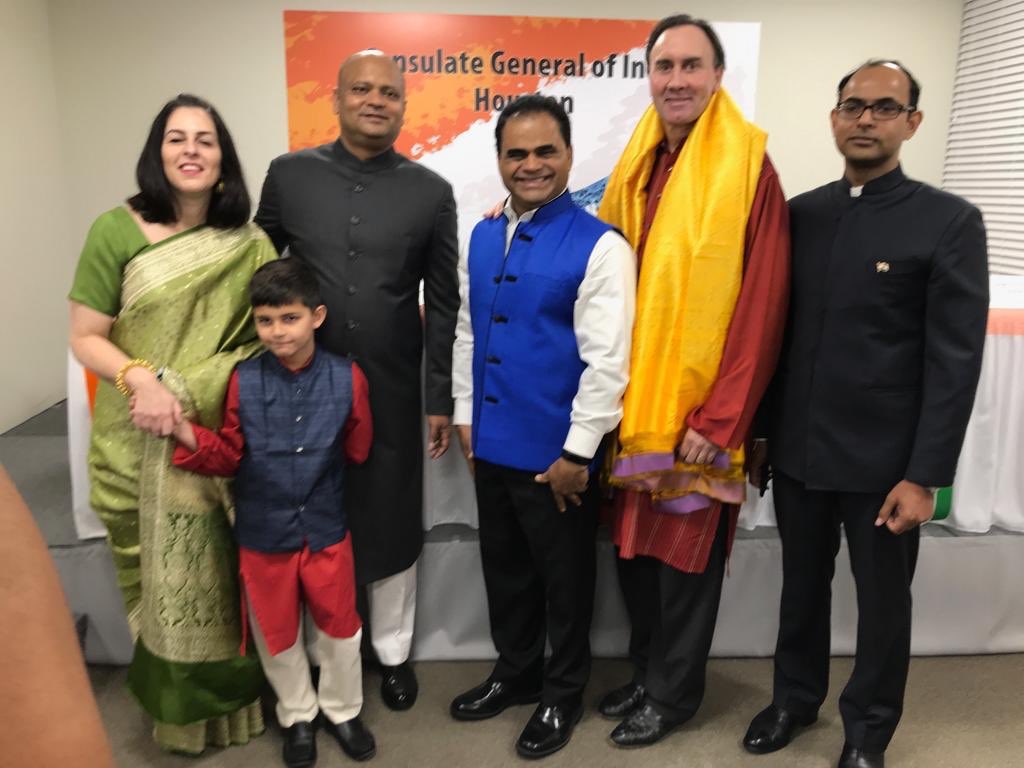 Members of the US House of Representatives, Pete Olson and Ford Benty County Judge, KP George were among those who attended the Republic Day programme at the Consulate General of India in Houston. Photo courtesy: Twitter@cgihou

“The US and India, the world’s largest democracies, share much in common, and I look forward to working with members of both communities towards a prosperous future of all,” Indian American George said. 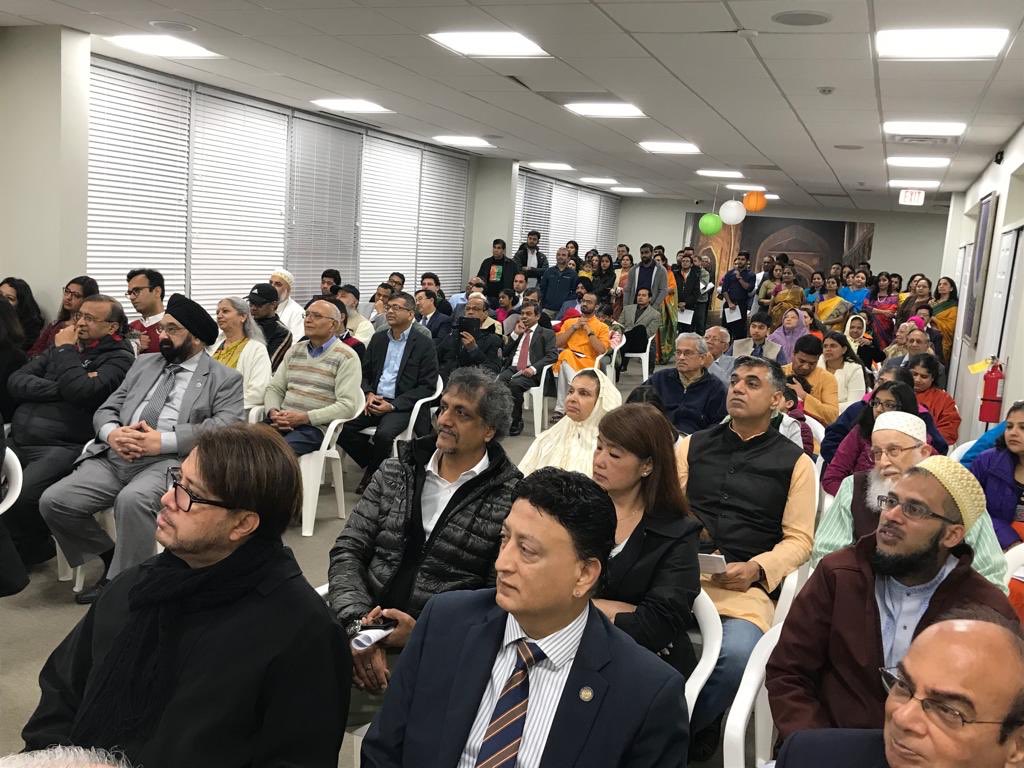 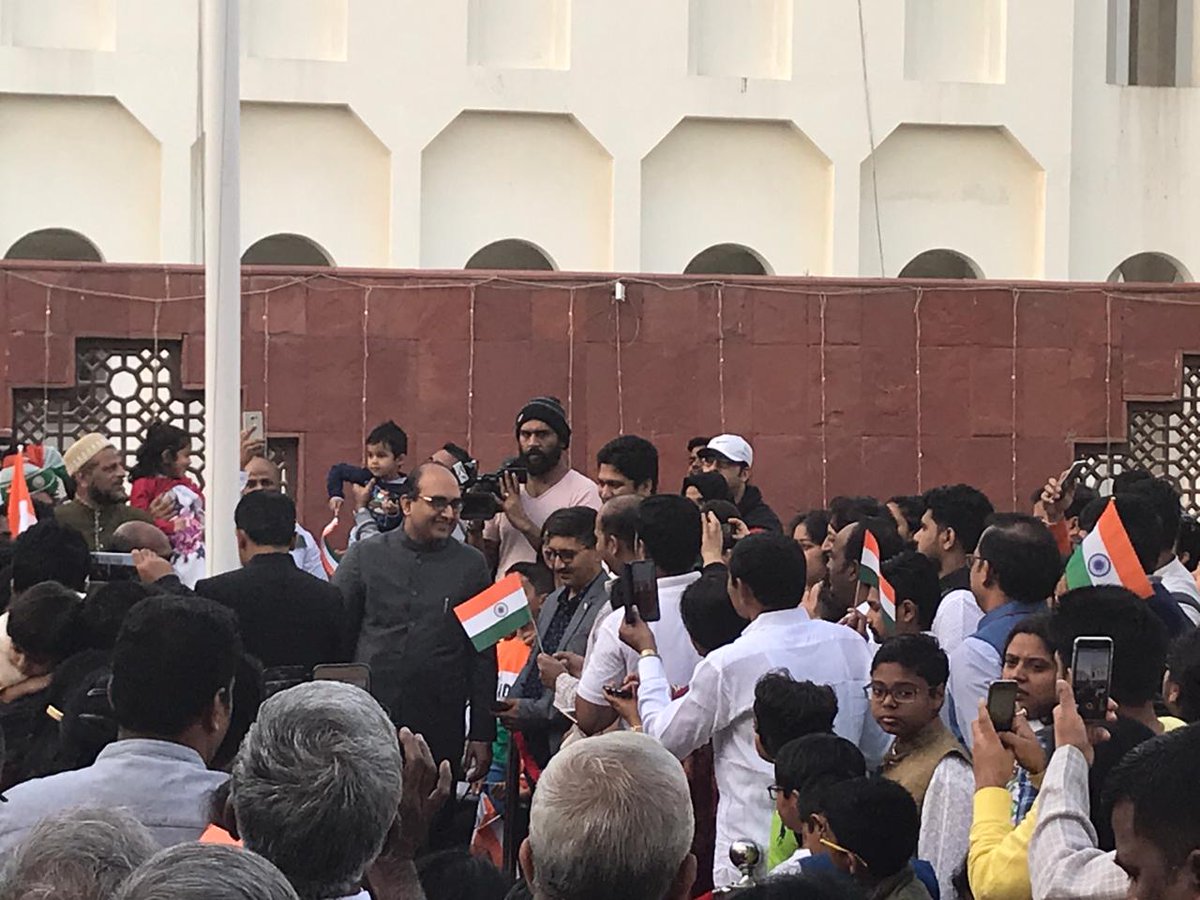 Numerous Indian expats from across the UAE celebrated Republic Day at the Consulate General of India in Dubai.

Vipul, Consul General of India in Dubai, hoisted the tricolour as residents and visitors sang patriotic songs and took pictures alongside the Indian flag. The consul general greeted people gathered at the event and read out the president's address to the nation. 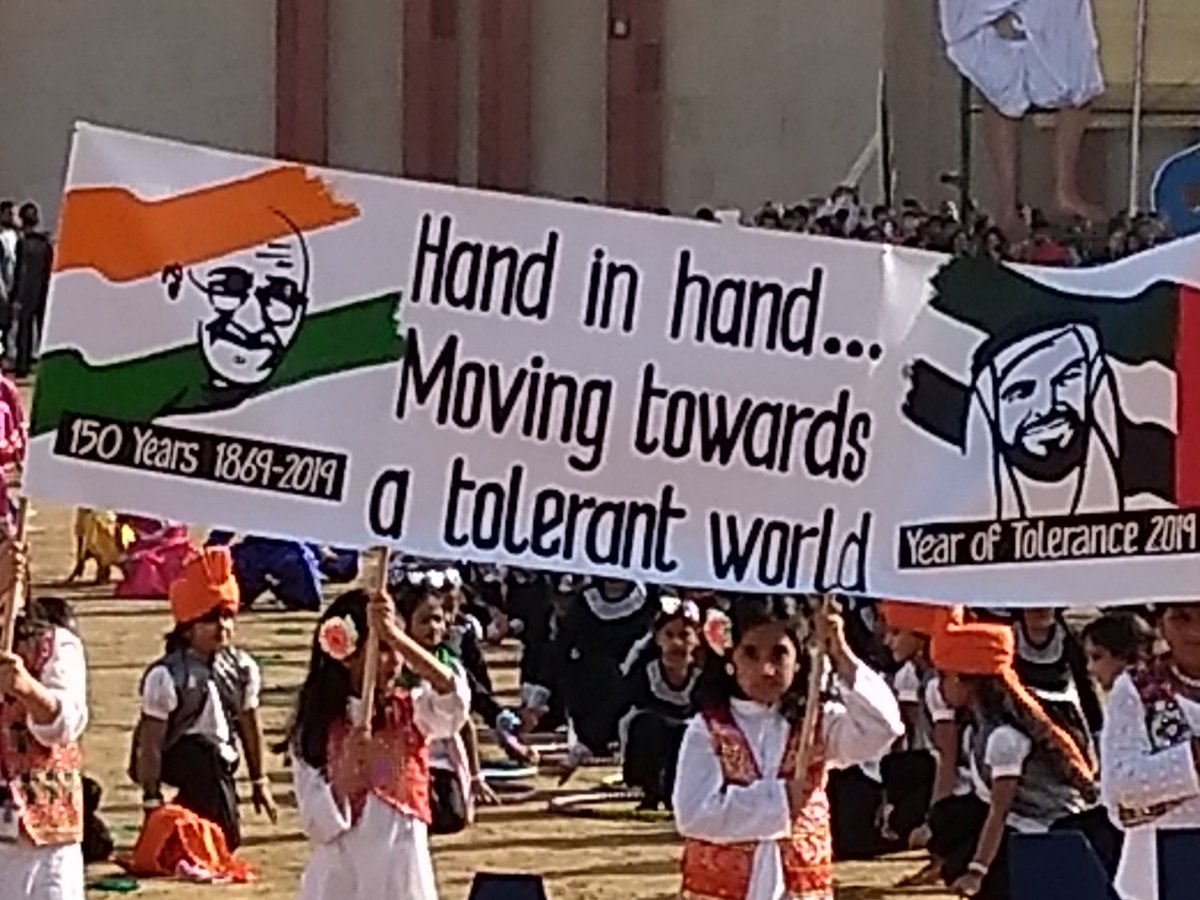 Children of the Indian High school presented a colourful cultural programme giving a glimpse of the diverse cultural heritage of the country.

The consul general also honoured two war heroes and parents of martyrs at the ceremony. Children and adults decked in traditional wear were seen with miniature Indian flags on the occasion. 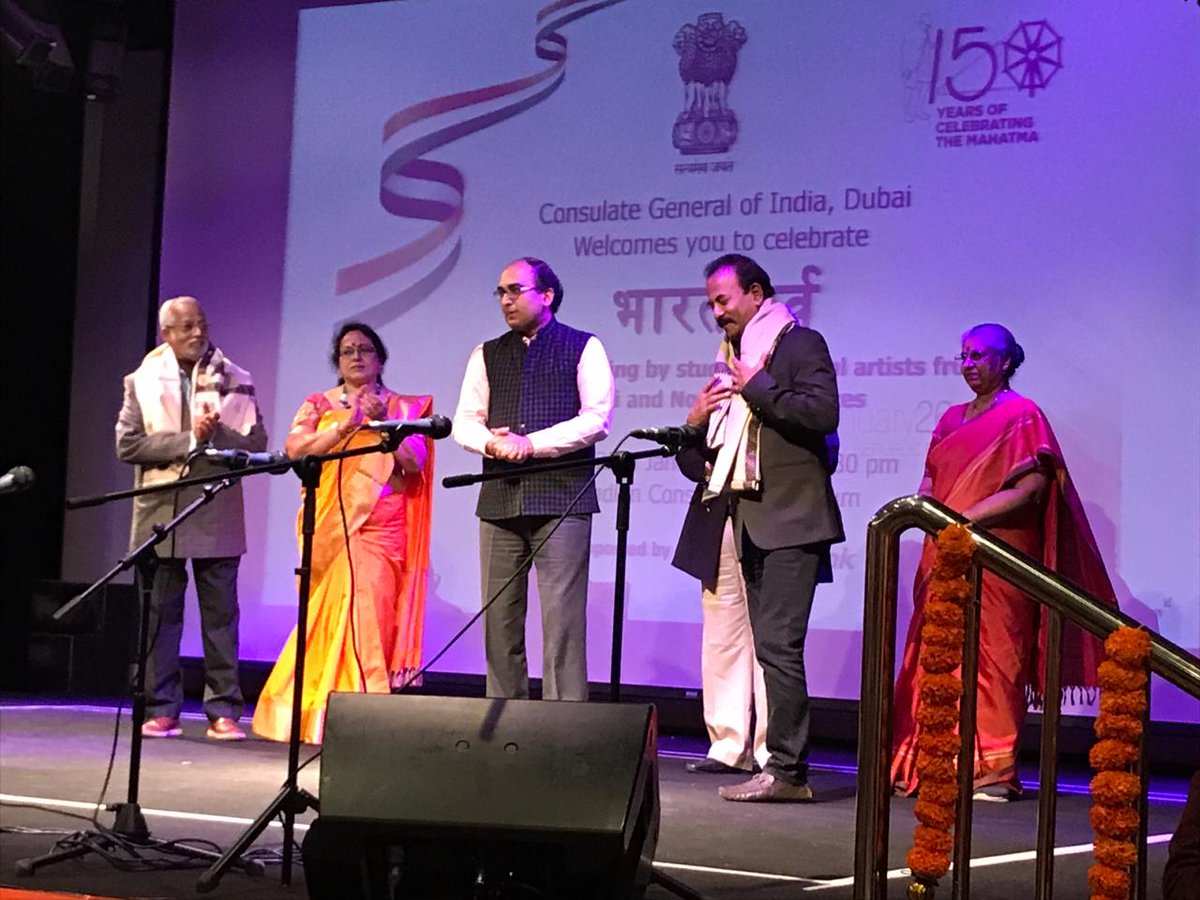 Republic Day was also celebrated in Abu Dhabi. Indian Ambassador Navdeep Suri led the India expats in celebrating the 70th Republic day in UAE. He said  that in an exceptional gesture of friendship by the UAE government, seven major public building in Abu Dhabi will be lit up with the Indian tricolour tonight on the occasion of Republic Day. 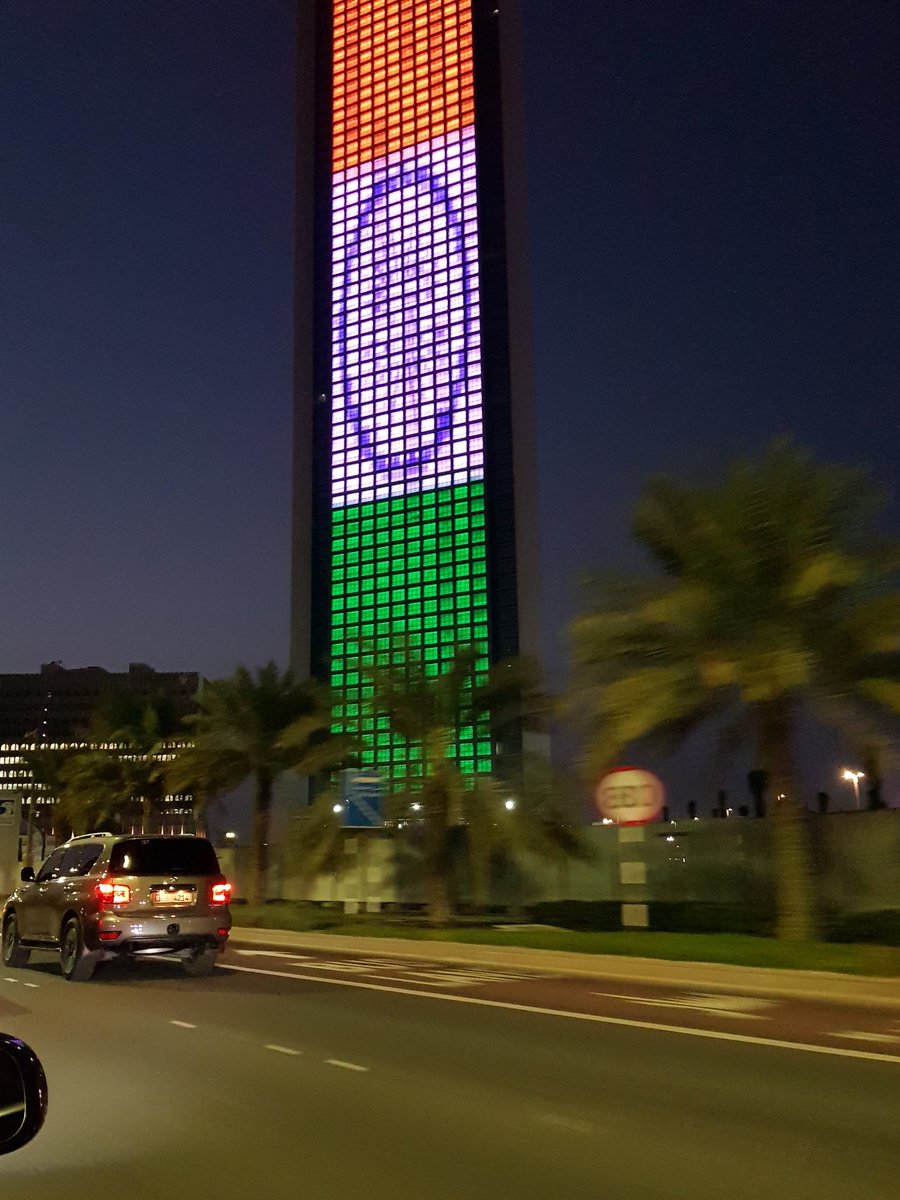 The iconic ADNOC tower of Abu Dhabi was resplendent in the Indian tricolour. Photo courtesy: Twitter@IndAmbUAE

Ambassador Ahmad Javed in Riyadh and Consul General Noor Rahman Sheikh in Jeddah who unfurled the tri colour amidst the presence of hundreds of expats from all walks of life in Saudi Arabia. 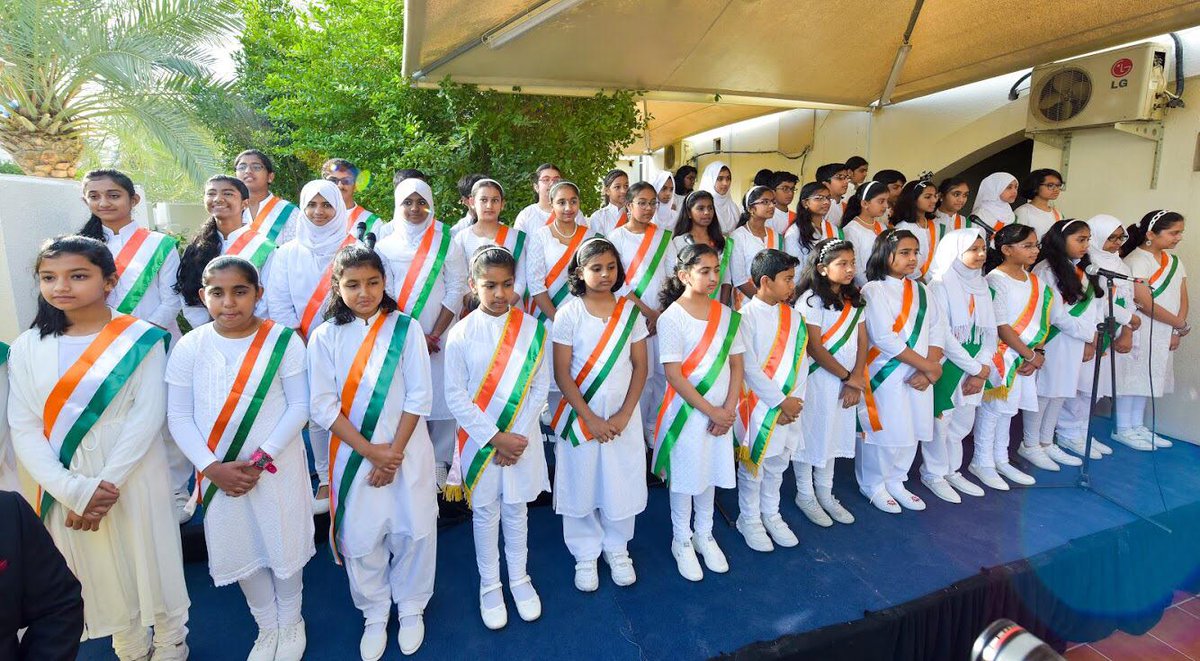