There is a perfect amalgamation of spirituality and modernity at the ongoing Kumbh Mela at Prayagraj. It is ready to welcome NRIs and delegates of Pravasi Bhartiya Divas (PBD) who will arrive in the holy city on January 24. State of the art luxury tents having 5-star facilities have been set up in the mela area for them.

The tent city is spread over an area of 100 hectares and built by six companies. Photo courtesy: kumbh.gov.in

Uttar Pradesh government has established a dedicated tent city on the plains of river Ganga and Yamuna to accommodate NRIs. The tent city is spread over an area of 100 hectares and built by six companies. It consists of villas, dormitory style tents in the Arail ghat area.

There are about 5,000 luxury tents equipped with all modern facilities similar to five-star hotels. Facilities liked food courts, restaurants and entertainment centres have been specially designed for pilgrims. They are decorated with Rajasthani motifs and patterns.

Talking to Connected to India, Neeti Bisht looking after the accommodation arrangements at Kumbh Prayagraj Camp, said, “The tent city has been divided into three categories including cottages- deluxe, super deluxe and villa. Villas are the most expensive ones because of the size and number of bedrooms. Each villa consists of two bedrooms and a common area. When you enter the villa, you will first spot the drawing room. On its left and right are two bedrooms with attached bathrooms.” 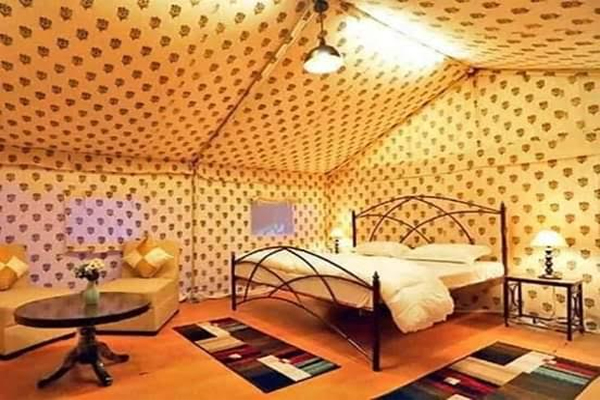 NRIs will be able to catch the glimpses of river Ganga right from the villa. Photo courtesy: Indraprastham

The attraction of these villas is that they are situated right on the banks of Ganga offering a full view of the river that holds immense spiritual significance.  NRIs will be able to catch the glimpses of river Ganga right from this villa.

In addition to this, five restaurants have been set up for pilgrims and tourists. All these restaurants will serve only holistic food. Besides, they will also serve special cuisines of all Indian states.

Various private players including Indraprastham, Kalpavriksh and Aagman India have been roped in to provide foreign pilgrims a once-in-a-lifetime experience. 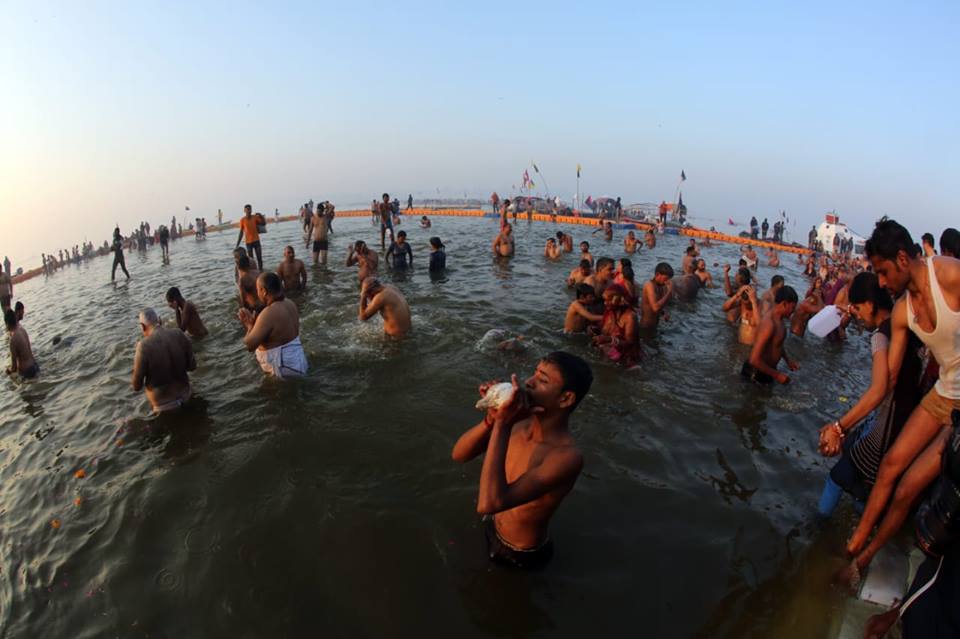 There is feeling of religious ecstasy as people take holy dip in Sangam, confluence of rivers Ganga, Yamuna and mythical Saraswati at Prayagraj. Photo courtesy: kumbh.gov.in

Indraprastham has been provided with 54 acres of area for setting up the cottages. They have set up about 1200 cottages on platforms providing 5-star facilities to the NRIs and PBD delegates. They have built their own restaurants that serve pure vegetarian food in eco-friendly stoneware crockery. The chefs are from different regions including north India, south India, Gujarat, West Bengal and Rajasthan.

To give a religious touch, Indraprastham has also set up 108 havan kunds (sacred structures) in the form of Swastika (a geometrical figure and an ancient religious icon), wherein 111 brahmin priests will be chanting mantras all through the Kumbh festival.