An Indian-origin person has created history in Malaysia by becoming the first Sikh to be inducted into the country’s Cabinet. The whole Punjabi community in the country is gung-ho over gaining a Sikh representative in the Cabinet.

Gobind Singh Deo (45) was given the portfolio of communications and multimedia. He is among the two politicians of Indian origin to be included in Pakatan Harapan coalition’s cabinet headed by Mahathir Mohammad. 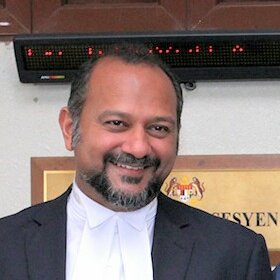 Gobind Singh Deo has created history in Malaysia by becoming the first Sikh to be inducted into the country’s Cabinet. Photo courtesy: Twitter@GobindSinghDeo

The other Indian-origin legislator to be appointed in the Cabinet is M Kulasegaran from the Democratic Action Party. He has been made the human resource minister.

Deo is the son of late Malaysian lawyer and politician Karpal Singh. He represents the Puchong constituency in Malaysia. He was recently sworn-in during a ceremony at the National Palace.

Gobind Singh Deo was first elected as a Member of Parliament in the 2008 general elections. The winning streak continued even in 2013 with an increased margin. In 2018, he won the election with a record margin of 47,635 votes.

The whole Sikh community is happy over the appointment of Deo as a Minister in the Malaysia’s Cabinet. There are about 100,000 Sikhs in Malaysia occupying significant positions in the country.

Councillor Karambir Singh, Miri Indian Association president, told Borneo Post, “It is good to see Gobind Singh, a member of the Punjabi community in the cabinet. It is a proud and happy occasion for our community.”

“Other than being a recognition of his abilities, it is also a recognition for the long established Punjabi community in Malaysia,” he added.