Marvel has said that a Ms Marvel movie is in the works. It would be the studio’s second female-led superhero film after Captain Marvel that will release next year. 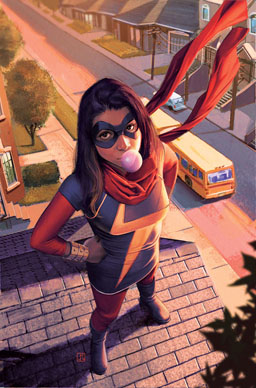 Although many characters in Marvel Comics have adopted the mantle of Ms Marvel, president Kevin Feige made it clear that the movie will be based on Kamala Khan’s version of Ms Marvel. Brie Larson will play the role of Danvers in the Captain Marvel film.

Kevin Feige told the BBC, “Ms Marvel… is definitely sort of in the works.” He went on to clarify that it is Kamala Khan’s version that will be adapted. Marvel’s recent Avengers: Infinity War is currently in theatres and has broken multiple box office records in India and around the world.

After a lot of criticism for casting mainly white, male characters in major roles, Marvel is trying to diversify its film slate by including characters of colour and female superheroes. This year’s Black Panther with its predominantly black cast was a humongous success for the studio and many believe that after the Thanos and Infinity Stones storyline is finished, the major characters would be the younger superheroes instead of Iron Man, Captain America and so on. There are also rumours of a Black Widow movie and an all-female superhero movie.

When Kamala Khan’s Ms Marvel was introduced, it received enthusiastic responses from comic-book readers around the world who praised her characterisation. Many said she was the idol of Pakistani-Americans and asked the comic-book and film industries to follow Marvel’s example.

Fans on Twitter are asking for casting Priyanka Chopra for the role. But others say she would not be a great choice, since Kamala Khan is a Pakistani-American and a teenager. Priyanka’s Quantico was recently cancelled after three seasons but she has a couple of Hollywood projects this year in the pipeline.