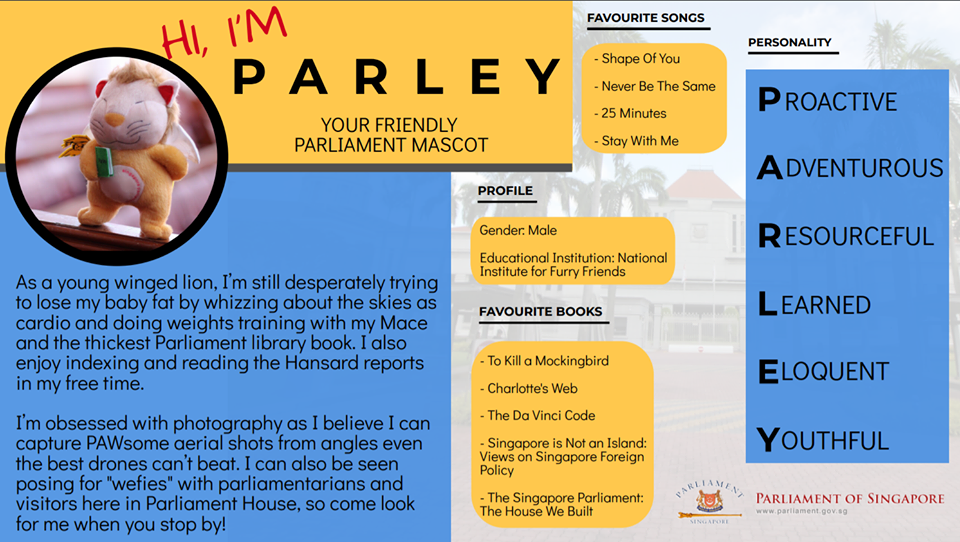 The mascot Parley is characterised by many attractive and intelligent features. According to the profile shared in the post, Parley stands for Proactive, Adventurous, Resourceful, Learned, Eloquent, Youthful.

His post reads, “As a young winged lion, I'm still desperately trying to lose my baby fat by whizzing about the skies as cardio and doing weights training with my Mace and the thickest Parliament library book.”

Regarding his education, Parley is said to have studied at the National Institute for Furry Friends.

Here's my best “Parliament’s Next Top Model” pose at the Main Foyer. This is a popular spot for group shots by many parliamentarians and visitors too 😜 . . . Do follow this account as I will be sharing more "insider" photos of Parliament! - Parley . . . . #SGParliament #ParleyAdventures #SingaporeParliament #ParliamentPlace #Singapore2018

His other interests are listed as indexing and reading the Hansard reports - the traditional name for reports of parliamentary debates - and photography.

Parley also has interests in books. His favourite books include Harper Lee's To Kill A Mockingbird, Charlotte's Web by EB White, Dan Brown's The Da Vinci Code as well as Bilahari Kausikan's Singapore is Not an Island: Views on Singapore Foreign Policy and The Singapore Parliament: The House We Built by Sumiko Tan.

The young mascot has also refined taste for music, with his favourite songs including Ed Sheeran's Shape of You, Camila Cabello's Never Be The Same, Michael Learns to Rock's 25 Minutes and Sam Smith's Stay With Me.