This initiative is partnership between the university, SMRT Services and 2getthere, according to a press statement by NTU Singapore.

The silent roadster uses magnetic pellets on the road for autonomous navigation and can travel in both directions. It has a top speed of 40 kilometres per hour and can ferry 24 passengers with seating space for eight.

The three parties signed a Memorandum of Understanding (MoU) at a ceremony today, paving the way for the GRT to be integrated into NTU’s transport network. The parties are also exploring the possibility of extending this to JTC’s CleanTech Park. 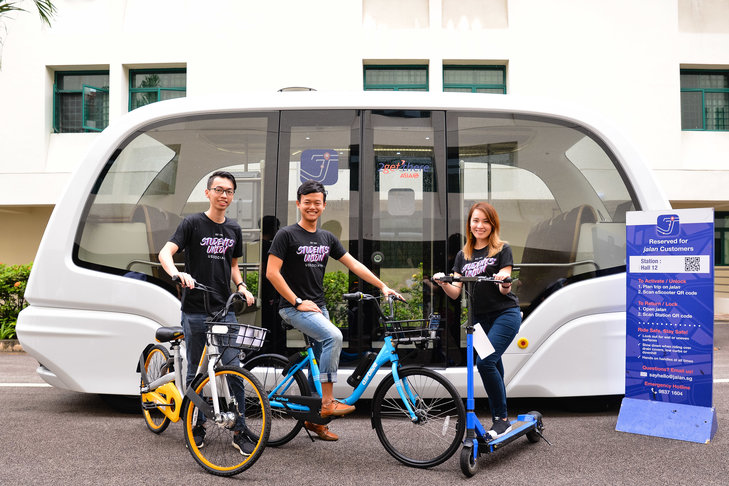 The vehicle will be tested on NTU’s campus in a few phases, which will start around the last quarter this year. They are expected to operate a service route that connects NTU’s halls of residences with the main academic areas, serving 200 to 300 passengers daily. The trial would be gradually expanded campus-wide, running alongside other autonomous vehicles that have already been undergoing tests since 2012.

The collaboration will also involve conducting research to improve autonomous vehicle technologies such as increasing the use of artificial intelligence, developing advanced sensors and sensor fusion algorithms, and improving fleet management technologies.

“NTU’s campus is not only a living testbed for innovative technologies, but also the first to test driverless vehicles in Singapore,” said NTU President Professor Subra Suresh. “Autonomous vehicles are an integral part of the NTU Smart Campus vision, which leverages tech-enabled solutions to create better living and learning experiences.”

Mr Sjoerd van der Zwaan, Chief Technology Officer of 2getthere, said, “It is exciting to be able to work together with NTU and SMRT while capitalising on the synergy of an actual AV implementation and investing in research simultaneously. In combination with SMRT’s operations expertise, all key ingredients are present to ensure a successful implementation of our AVs at NTU. We look forward to our continued cooperation.”