Close on the heels of the agreement to step up naval cooperation this week, India and Singapore are set to renew soon their agreement for the use of army training and exercise facilities in India. 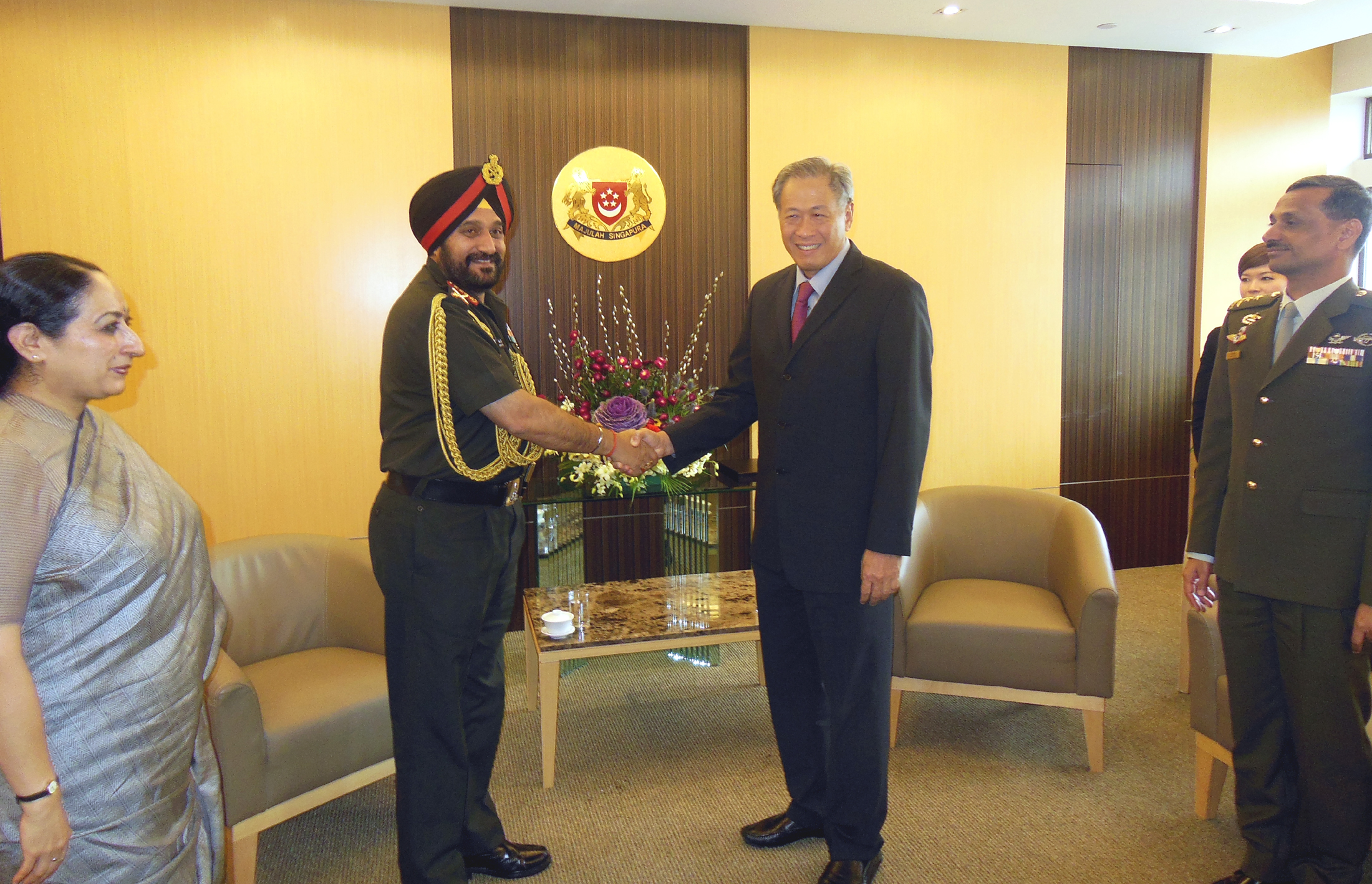 An indication to this effect by the Indian Minister of Defence Nirmala Sitharaman and Singapore Minister for Defence Dr Ng Eng Hen in a joint statement issued during a press conference held in Delhi earlier this week. 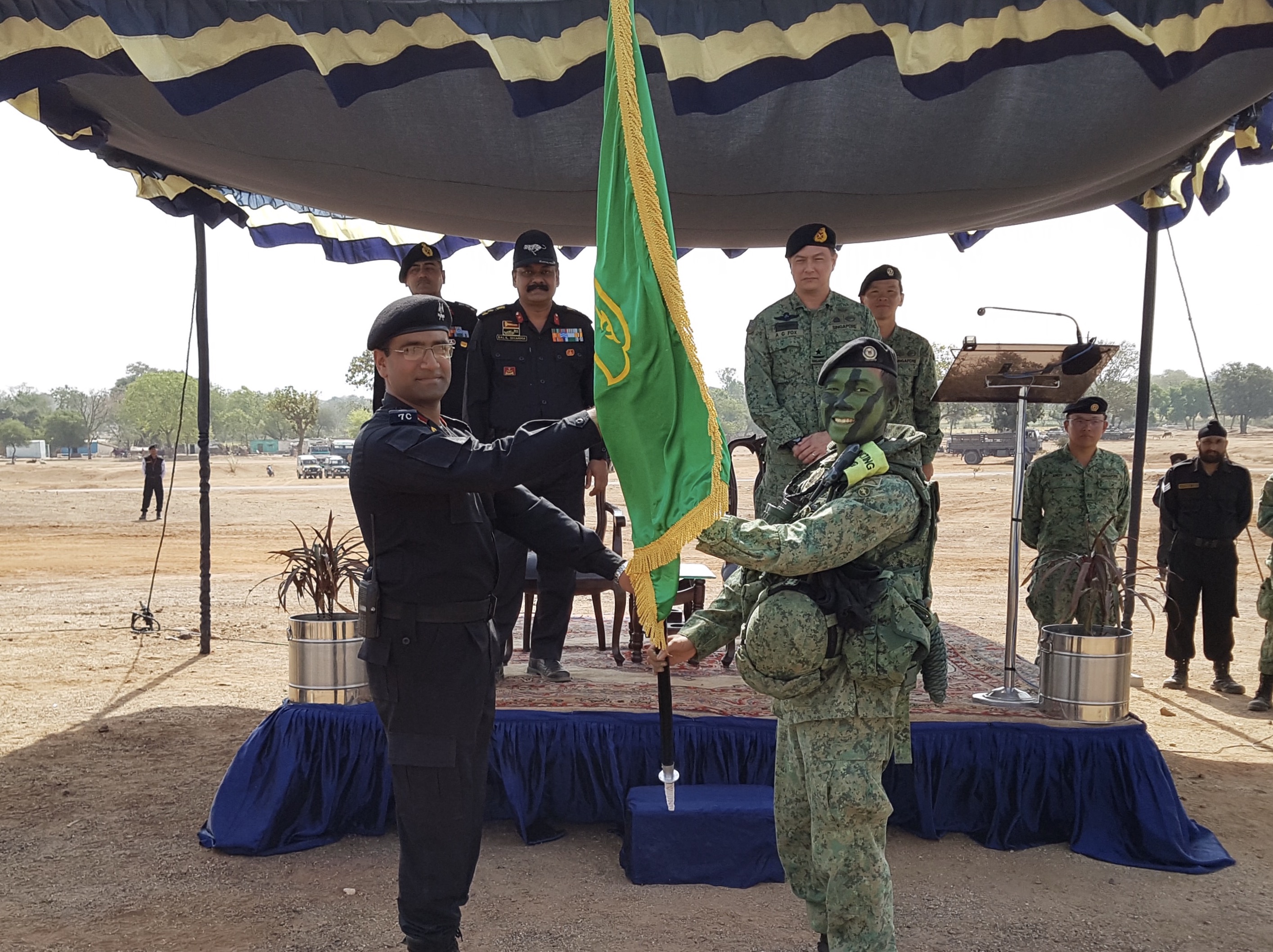 India and Singapore in August 2008 had signed an agreement to extend the use of training and exercise facilities in India by the Singapore Army for a further period of five years from August this year. The agreement was renewed on June 3, 2013 by the Indian Defence Secretary Radha Krishna Mathur and the Singaporean Permanent Secretary of Defence Chiang Chie Foo in the presence of the Defence Ministers of the two countries Dr Ng Eng Hen and AK Antony who was on a visit to Singapore. 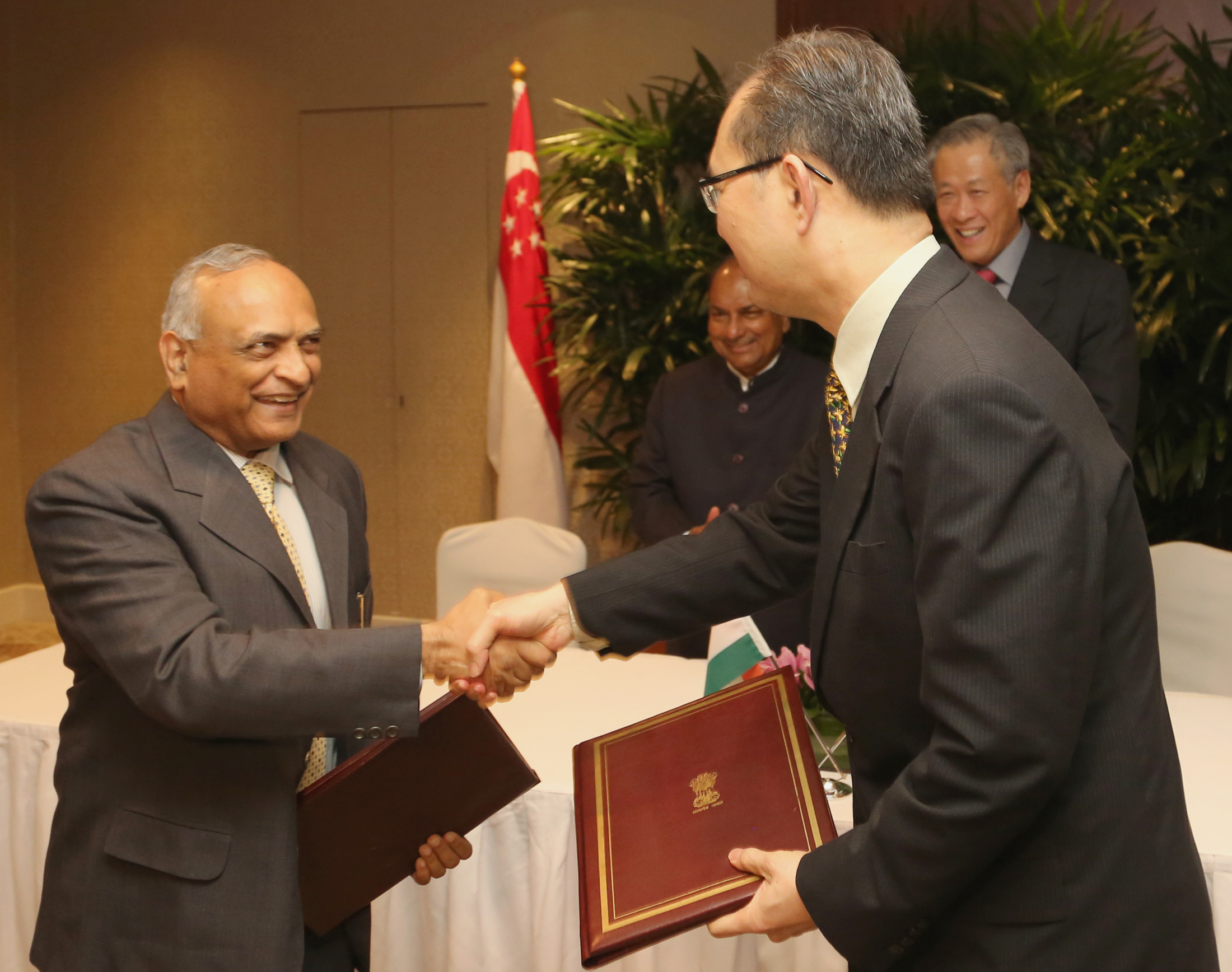 The Indian Defence Secretary, Radha Krishna Mathur and Singaporean Permanent Secretary of Defence, Chiang Chie Foo exchanging the signed documents of an agreement to extend the use of training and exercise facilities in India by the Singapore Army for a further period of five years from August this year, in the presence of the Defence Minister, A. K. Antony and his Singaporean counterpart Dr. Ng Eng Hen, in Singapore on June 3, 2013. Photo courtesy: Indian Ministry of Defence

A bilateral agreement for utilisation of facilities in India by the Singapore Air Force and Army was signed in October 2007 and August 2008 respectively. The agreement for training and exercises of Singapore Air Force in India was extended up to October 2017 during the visit of Singapore’s Permanent Secretary of Defence to India in July last year. Singapore is the only country to which India is offering such facilities.

The two sides have since held wide-ranging talks on defence cooperation and have exchanged concerns on global and regional security issues including Asia-Pacific security.

Ahead of the 25th anniversary of the Singapore-India Maritime Bilateral Exercise, India and Singapore navies this week inked an agreement during Dr Ng's visit to step up maritime cooperation in terms of regional security, logistics, drills and deployment of warships at each other's naval facilities.

The second Defence Ministers’ Dialogue between India and Singapore was hosted in Delhi this week and was inaugurated after both countries signed the revised Defence Cooperation Agreement (DCA) in 2015 to further strengthen the longstanding defence relationship between the Singapore Armed Forces (SAF) and the Indian Armed Forces.

Dr Ng expressed his appreciation for India’s continued support for the SAF’s training in India, covered by the Air Force and Army Bilateral Agreements. On regional security, both Ministers reaffirmed the importance of maintaining maritime freedom of navigation and trade consistent with international law. India plays a vital role in the ASEAN Defence Ministers' Meeting (ADMM)-Plus. Both Ministers also discussed Singapore’s proposal to expand the Code of Unplanned Encounters at Sea to all ADMM-Plus countries as well as to establish guidelines for air encounters between military aircraft, in order to reduce the risk of miscalculations. 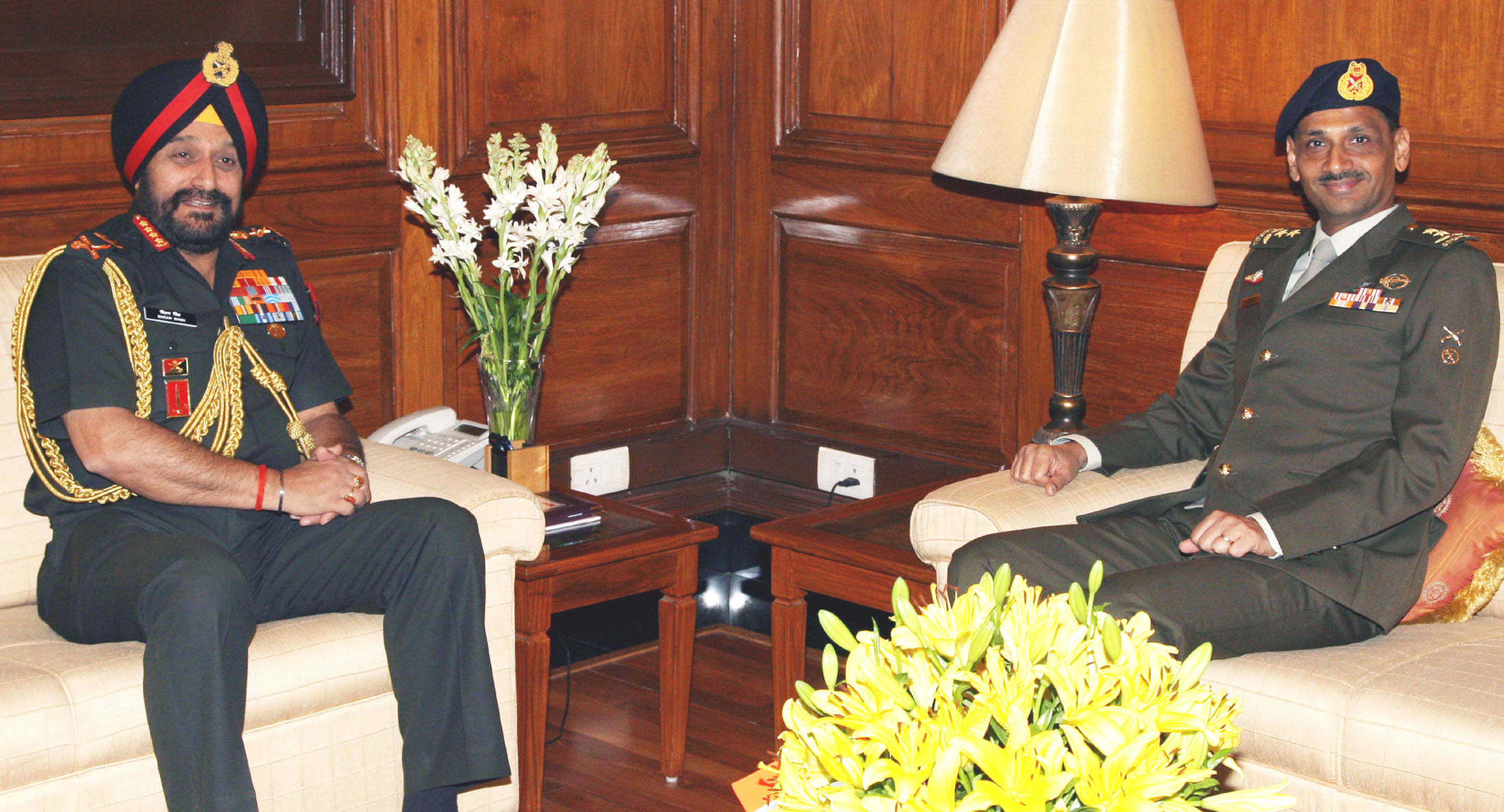 The Chief of the Singapore Army, Maj. Ravinder Singh meeting the Chief of Army Staff, General Bikram Singh, in New Delhi on March 19, 2013. The bilateral agreement between armies was renewed in later June. Photo courtesy: indian Ministry of Defence

Both countries recognise the centrality of ASEAN in the security architecture of the region and focus on maritime security, freedom of navigation and threat of terrorism.

Defence Cooperation Agreement (DCA) between India and Singapore was signed in October 2003, and the enhanced DCA signed in November 2015 during Prime Minister Narendra Modi's visit to provide an overarching framework for bilateral defence cooperation. This includes the conduct of policy dialogues, working group and staff talks, exercises, training activities, exhibitions and conferences. 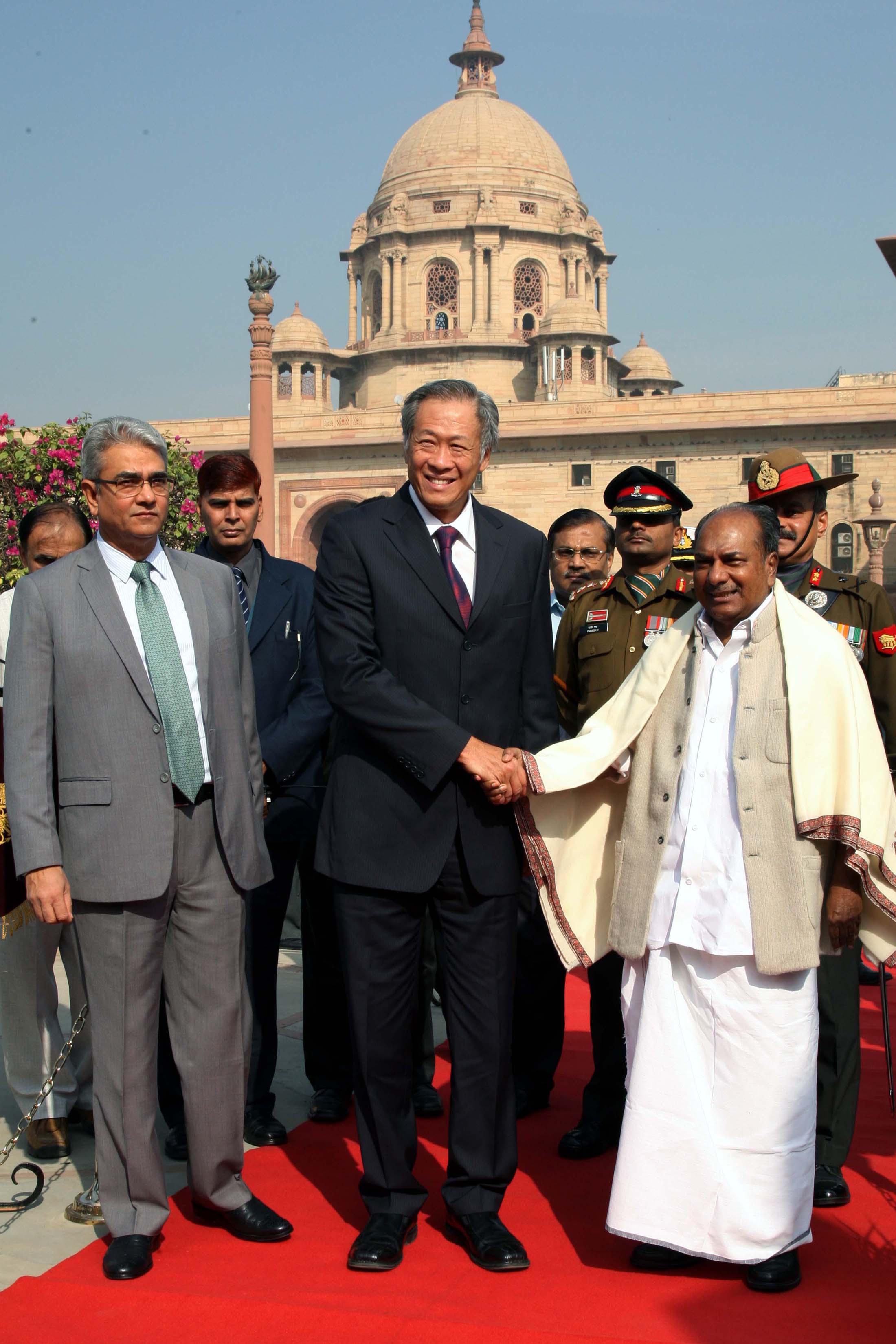 Pursuant to the enhanced DCA, the inaugural Defence Minister Dialogue was held on June 3, 2016 when the then Defence Minister Manohar Parrikar visited Singapore for the 15th Shangri-La Dialogue. Exchange of visits and exercises are regularly held between armed forces of two countries.