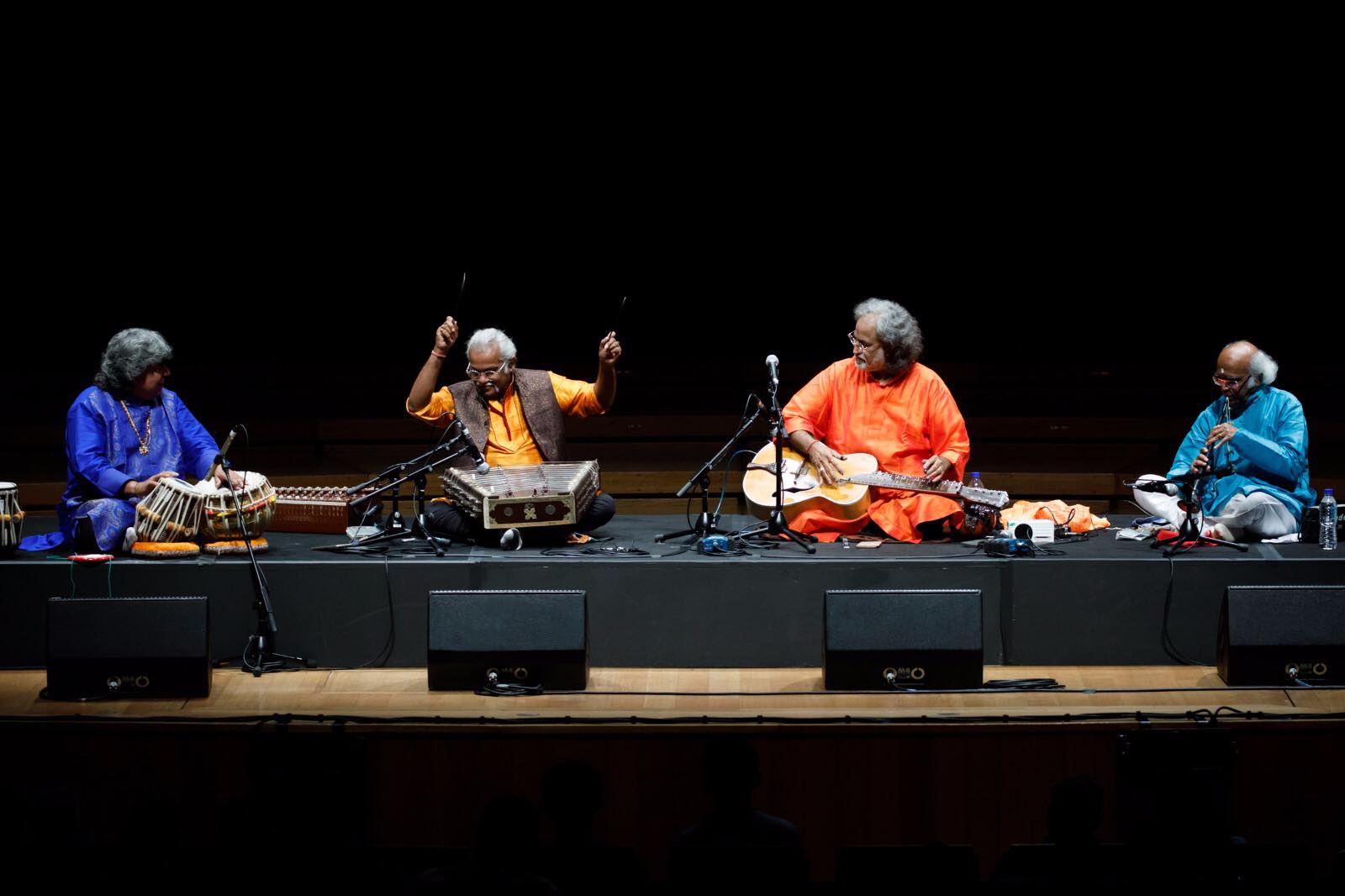 Draped in vibrant colors they sat on stage. Nimble fingers on string, wind and percussion instruments wove magical patterns of melody and rhythm. Each brought out an element of the range, vibrancy and depth of Indian classical music; and together they enthralled the audience transporting them to a plane where music brought the joy of meeting a childhood friend. A joy that links one to ones own roots.

Grammy award-winner Pandit Vishwa Mohan Bhatt with his self created Mohan veena, Pandit Daya Shankar with shehnai, Pandit Tarun Bhattacharya on santoor and Ramkumar Mishra on tabla conversed in music at Raag Tarangini in Kalaa Utsavam on 18th November. The program began with Raag Yaman and sailed through Mahatma Gandhi’s favourite bhajan- Vaishnav Jan To Tene Kahiye; the piece for which Pandit Vishwa Mohan Bhatt won the Grammy award, a participatory lesson that had the audience forming a melodious chorus and ended with the energetic Jog Jazz.

Connected to India (CtoI) met Pandit Vishwa Mohan Bhatt after the show for an engaging conversation on the power of Indian classical music, his efforts on connecting people with their roots and the need for celebrating individuality.

CtoI: You are a global ambassador of Indian classical music and an active educator too. You have been associated with the Society for Promotion of Indian Classical Music and Culture Amongst Youth (SPICMACAY) for many years now. What makes you such a passionate educator?

Pt Vishwa Mohan Bhatt: It is my duty to make our youth understand the beauty and the power of Indian classical music. I feel energised when I am with them. I have got so used to their warmth, that I don’t enjoy as much when I am not among them. I regularly perform at SPICMACAY concerts. Infact I am going to Delhi tomorrow for three days and have four concerts with SPICMACAY there. I think the aim of SPICMACAY of educating the youth has been fulfilled by about 80% now. The younger generation is very receptive to classical music because now they are aware of it through these programs. When they are exposed to the power of our music they understand it and embrace it. How many youth did you see in todays concert? They are busy with their phones, laptops or even playing blue whale. They don’t come to us. We go to them through SPICMACAY. We introduce them to maestros that have earned respect and name across the globe. We show them why and how they have achieved that place. Whenever SPICMACAY invites me, I go. I went to Titlagarh, which is a six hour journey by road from Raipur, the capital of Chhatisgarh state. The roads were terrible, the journey was long but once I reached, I conducted workshops and had three programs. They were mesmerised. The entire college came. There was very good interaction, we discovered talent too and I invited them on stage to sing. These little things matter a lot. We have to educate, inculcate and encourage. We need to save and preserve our heritage, our culture. 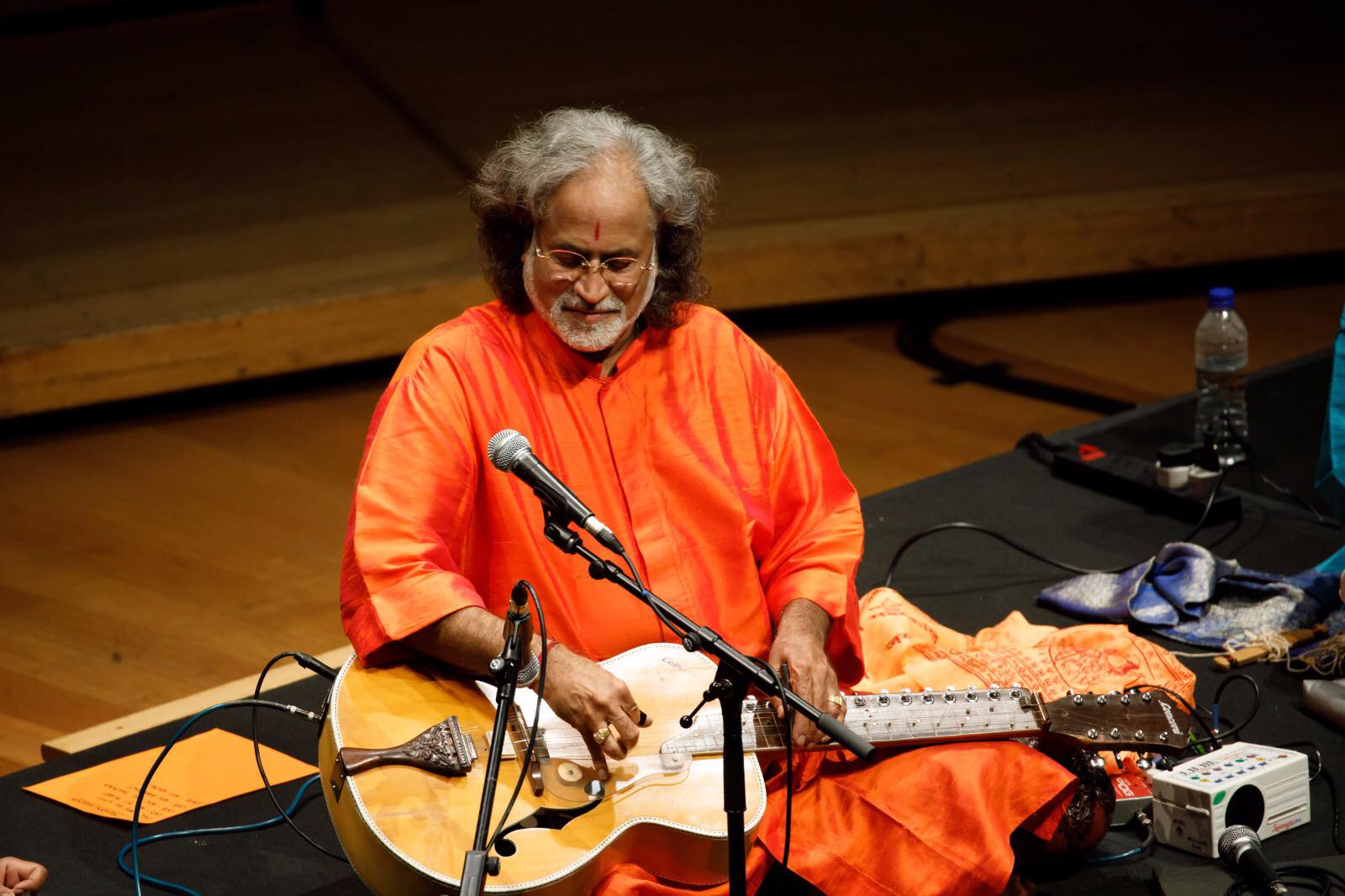 CtoI: When does riyaaz or practice end and a performance begin; when does work end and pleasure begin, when you are playing?

Pt Vishwa Mohan Bhatt: I will tell you what I feel and it may be different for other artists. For me when I play like I did a little while ago at Raag Tarangini in such a setting, it is my biggest riyaaz. It is at moments like these that I feel I have my biggest imagination. That place becomes sacred and receptive to vibrations and energy from the environment. Some also term vibrations as God. It is as if goddess Saraswati herself takes seat and guides. The energy of musicians, instruments, raagas, audience, and sound transports us to a different level of existence. We forget which country or city we are performing in. It takes a while to reach this stage but when you do, it is bliss.

CtoI: What kind of a performance gives you satisfaction?

Pt Vishwa Mohan Bhatt: I had a program in Chandigarh recently in which I was paid Rs 10 lakhs for performing for an hour. I performed but I didn’t enjoy it. The next day I had a program at SPICMACAY. I enjoyed it so much. I don’t get anything from them, there is no monetary gain. But I enjoyed it so much. I played for an hour, then it stretched to hour and a half, then two hours- and the students just didn’t want to let me leave. The pleasure of such a performance can not be equalled by several paid performances.

CtoI: You inspire so many people. What is your message to them?

Pt Vishwa Mohan Bhatt: I am very small to be able to inspire anyone. Vivekanand ji, Mahatma Gandhi are the people who inspire. I try to do my bit practically. I want to tell them that concentration dedication, sincerity, honesty, discipline, commitment and focus together help you achieve your goal. It is not an easy route; it’s a long journey and will take time. But if you have these then you will be on the path to success. The other thing I want to share with our youth is that you should be proud of our culture. You need to understand why our traditional dress is what it is. There is a reason behind it. In Gujarat people wear dhoti and kurta. They wear white because it keeps them cool in the hot climate.  We dress the way we do because it suites the environment we live in. It is important that we know our roots, where we come from. We have to preserve our culture, language, attire, and heritage. I see that now-a-days people feel proud of not knowing their native language, of not speaking in Hindi. It seems they take pride in saying their Hindi is not good. Why? I notice that when there is an argument or a fight people burst out in English. They feel they become stronger with that language. I say keep your originality. Don’t hide it. Be proud of your individuality. Be original, don’t ape people blindly. Create your own identity confidently.