Former Bihar governor Ram Nath Kovind is set to become India's 14th President and the first member of the right wing Hindu organisation Rashtriya Swayamsewak Sangh (RSS) to hold the post, winning a contest marked by cross-voting in his favour in West Bengal, Maharashtra, Gujarat and Goa as well as among Rajya Sabha and Lok Sabha members. 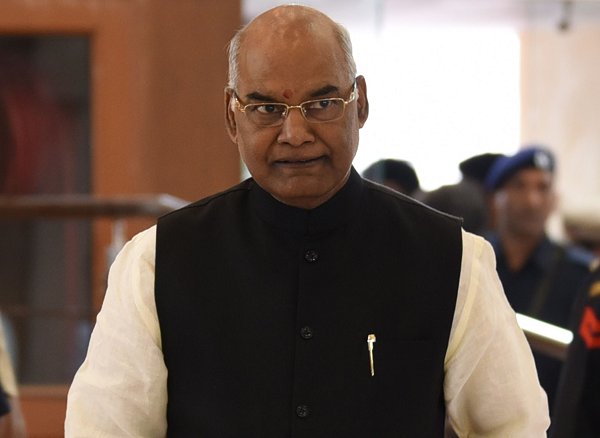 ​Kovind, who will be sworn in as President on July 25, defeated the opposition candidate, former Lok Sabha Speaker Meira Kumar, in a one-sided contest by garnering close to 66 per cent of the vote.

The Bharatiya Janata Party (BJP) candidate succeeded in pulling in votes from the opposition camp in four states as well as in Parliament. BJP managers said they had gained 10 excess votes in Bengal even as the Trinamool Congress and the Congress traded claims of cross-voting from each other's camps.

In Parliament, there were 21 invalid votes. The opposition could have hoped to get the votes of around 240 MPs, but got the support of 225 MPs. Kovind got the backing of 522 MPs.

As the final figures came in, BJP gained two votes in J&K, four in Haryana, 11 in UP, four in Himachal Pradesh, five in West Bengal, eight in Karnataka, 13 in Maharashtra, six in MP and two in Chhattisgarh.

BJP interpreted the results as a vindication of its efforts to build pan-India support for Kovind. "This is a good sign for the party's efforts to put together a wide and far-ranging coalition ahead of the 2019 election. It shows BJP's acceptability among many parties and different regions," said Rajya Sabha MP Bhupendra Yadav, who coordinated Kovind's campaign. 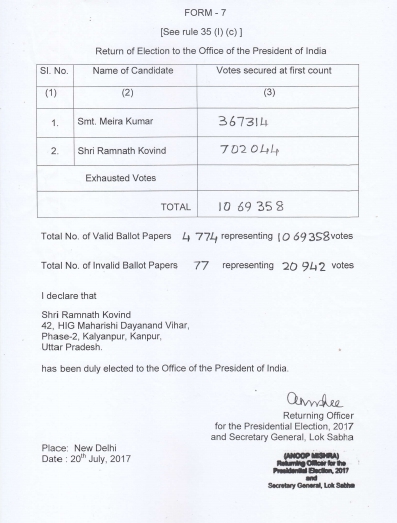 The 71-year-old Kovind will be only the second Dalit President of India after KR Narayanan. He will also be the first member of the BJP to be elected to the Rashtrapati Bhavan.

Kovind’s choice is seen by experts as part of a series of outreach efforts by the ruling party aimed at getting the country’s 16.6 per cent politically significant Scheduled Caste (SC) population into its support base, culminating in what many see as the BJP’s latest ‘masterstroke’ — picking a Dalit leader from Uttar Pradesh as its nominee for the Presidential poll.

Speaking to the press after the result, Kovind said it was an “emotional moment” for him.

“I never dreamed of this position nor was it a goal. My election to this post is a message to all those who discharge their duties with honesty and integrity,” he said, promising to uphold the Constitution of India and follow the policy of Sarve Bhavantu Sukheenaha or ‘peace and prosperity to all’.

Indian Prime Minister Narendra Modi was one of the first to wish the President-elect, tweeting out pictures taken 20 years ago at a wedding in Kovind’s family and a more recent one with Kovind and his family at the prime ministerial residence, 7, Lok Kalyan Marg. Modi also praised Meira Kumar for her campaign which was in the “spirit of democratic ethos, and values” which “we are all very proud of.”

Kovind, 71, was born in a village in rural Kanpur, the son of a farmer who subsequently sold off a piece of land to fund his son’s education, where he enrolled for a law degree and prepare for the civil services examination. Kovind cleared the exam in his third attempt, but did not join the service. He chose instead to practise as a lawyer, first at the Delhi High Court and later as standing counsel at the Supreme Court between 1980 and 1993.

He joined the BJP in 1991, and contested two Assembly polls in Uttar Pradesh, both of which he lost. He served two terms in the Rajya Sabha between 1994 and 2002, and served as the president of the Scheduled Caste Morcha of the party between 1998 and 2002, significantly during the period the NDA’s vice-presidential nominee, M Venkaiah Naidu, was party president.

He was appointed Governor of Bihar in 2015 and managed to strike a good working relationship with Chief Minister Nitish Kumar, who reciprocated it by supporting him in the presidential polls despite calls for Opposition’s unity.