"Goat Yoga" is the latest fitness craze sweeping the United States, according to a report by AFP.

These new workouts taking place on farms across the country, involving Nigerian Dwarf goats roaming about as yogis carry out their sun salutations.

"At first, it was a bit scary because I didn't know the goats were going to jump on my back," yogi Adonna Ebrahimi told AFP after completing her first ever "Goat Yoga" class. "But then they were there and you felt the warmth of the animal and you're on the straw, in the sun, with the trees and the blue skies around you, and it just felt so calming and peaceful." 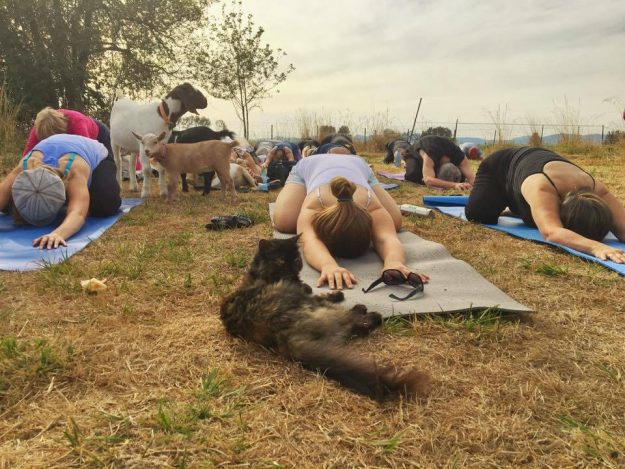 The sound of bleating, the nimble animals skipping about and jumping on people's backs accompanied the instructions of the yoga teacher. Once in a while, the little ones stop to munch on some hair or a beard and lick someone's face.

A few also answered the call of nature.

Yoga instructor Meridith Lana said interacting with the goats is an experience similar to playing with a pet. It is the sort of interaction that has been clinically proven to relieve stress and improve well-being.

"The happiness the goats bring is great," she said. "All animals are therapeutic but there is something about these goats that is just incredible.

Some students said while the goats did admittedly get in the way of the yoga stretches and poses, they were a welcome distraction that had everyone giggling and wanting to come back for more.