Only Singaporeans and Permanent Residents (PRs) will be allowed to attend the annual Pink Dot gathering, to be held on July 1 at Hong Lim Park, event organisers said today. This comes after amendments to the Public Order Act, which came into effect on Nov 1.

In a Facebook note, Pink Dot's organisers said they had received a reminder from the Police that the changes in the law meant that it "no longer distinguishes between participants and observers, and regards anyone who turns up to the Speakers’ Corner in support of an event to be part of an assembly".

The organisers said in the statement, “in order to continue using the Speaker’s Corner as a location for the event, Pink Dot organisers ‘have no choice’ but to follow the regulation, or risk both organisers and/or foreigner participants being liable to a fine up to S$10,000, jail up to 6 months or both.” 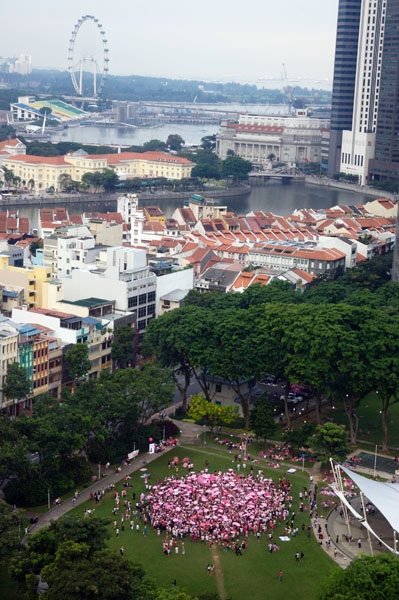 The LGBT community converging at Hong Lim Park in Singapore for the inaugural Pink Dot SG in 2009. Photo courtesy: Wikipedia

The organisers added that they will be live-streaming the event on social media and providing updates for those who are not allowed to attend.

Acknowledging that the new law "directly impacts and separates individuals with partners, friends and family who might not be Singapore Citizens or PRs", the organisers said "this was a decision that was taken out of our hands" and that they were "just as upset by this."

"Pink Dot has been honoured by the strong support from friends from around the world who have unfailingly attended our events over the years, observing as their Singaporean friends make a stand for inclusion, diversity and the Freedom to Love," they said.

Pink Dot is an annual event, held in support of the Lesbian, Gay, Bisexual and Transgender (LGBT) community.

The new regulations also mean that from this year, foreign companies cannot sponsor the event. In previous Pink Dot events, foreigners were allowed to assemble at Hong Lim Park but not to participate. They were, however, able to observe from the sidelines.

Past Pink Dot gatherings also saw a stream of multinational companies, such as Google and Barclays bank, sponsoring the event.