"We have taken up such issues in the past with the government of Canada through diplomatic channels. What I can mention without going into the details of this particular instance is that the practice has not been discontinued," foreign ministry spokesperson Gopal Baglay said.

The MEA was responding to a question on the presence of Trudeau at the Khalsa Day celebrations to mark the Sikh new year, where photographs of Jarnail Singh Bhindranwale, considered a terrorist by India, were also displayed.

Bhindranwale, an extremist Sikh leader, who was at the forefront of the Khalistan movement in the 1980s, was killed by the Indian Army on the grounds of the Golden Temple in Amritsar, one of the most venerated Gurdwaras for Sikhs when soldiers stormed onto holy ground as part of Operation Blue Star in June 1984 to remove the extremists who were holed up there.

The event was held to honour two legislators who had authored a motion in the Ontario assembly terming the 1984 anti-Sikh riots a "genocide". Khalistani flags were also allegedly waved at the event. The organisers, Ontario Sikhs and Gurdwara Council, also felicitated New Democratic Party MPP Jagmeet Singh, who had moved a similar motion in 2016 that was defeated. 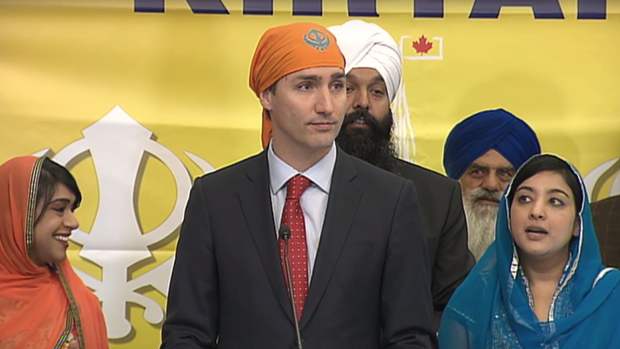 A senior Indian official described Trudeau’s presence at the Khalsa Day event as “surely a matter of concern”. Trudeau was the first Canadian prime minister to attend the event since Paul Martin in 2005.

While the Indian government has notified Ottawa of its concern, Canada has consistently maintained that such a protest, as long as it remains peaceful, is part of freedom of expression.