The Bharatiya Janata Party has suspended its spokesperson Nupur Sharma as a primary member of the party and also expelled Naveen Kumar Jindal after their alleged controversial remarks on Prophet Mohammad. 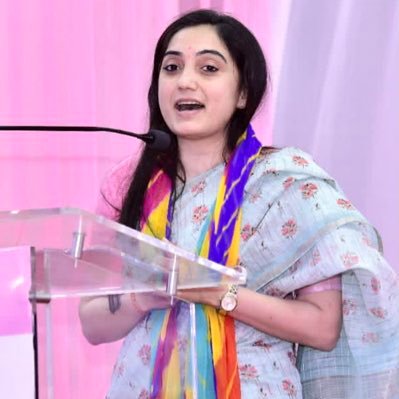 A communication to Sharma from the party's disciplinary committee said she has expressed views contrary to the party's position on various matters, which is in clear violation of its constitution. Photo courtesy: Twitter/@NupurSharmaBJP

The development comes hours after the party issued a statement seeking to defuse the row.

Expelling Jindal, the BJP said his views on social media vitiate communal harmony and are in violation of its fundamental beliefs.

"Your primary membership is immediately terminated and you are expelled from the party," a communication from its Delhi president Adesh Gupta said.

A communication to Sharma from the party's disciplinary committee said she has expressed views contrary to the party's position on various matters, which is in clear violation of its constitution.

"Pending further inquiry, you are suspended from the party and from your responsibilities, assignments if any, with immediate effect," it said.

The BJP earlier asserted that it respects all religions and strongly denounces insult of any religious personality. Party general secretary Arun Singh said in a statement that the party is strongly against any ideology which insults or demeans any sect or religion.

Last week, clashes broke out in Uttar Pradesh’s Kanpur after members of two groups threw stones at each other over a call to shut down markets in protest against her statement made in the context of the controversy over the Gyanvapi issue.

Singh said, "During the thousands of years of history of India every religion has blossomed and flourished. The Bharatiya Janata Party respects all religions. The BJP strongly denounces insult of any religious personalities of any religion."