Apsaras Arts Artistic Director Aravinth Kumarasamy was conferred the prestigious Cultural Medallion for 2022 in a ceremony held at the Istana, the official residence of the President of Singapore. 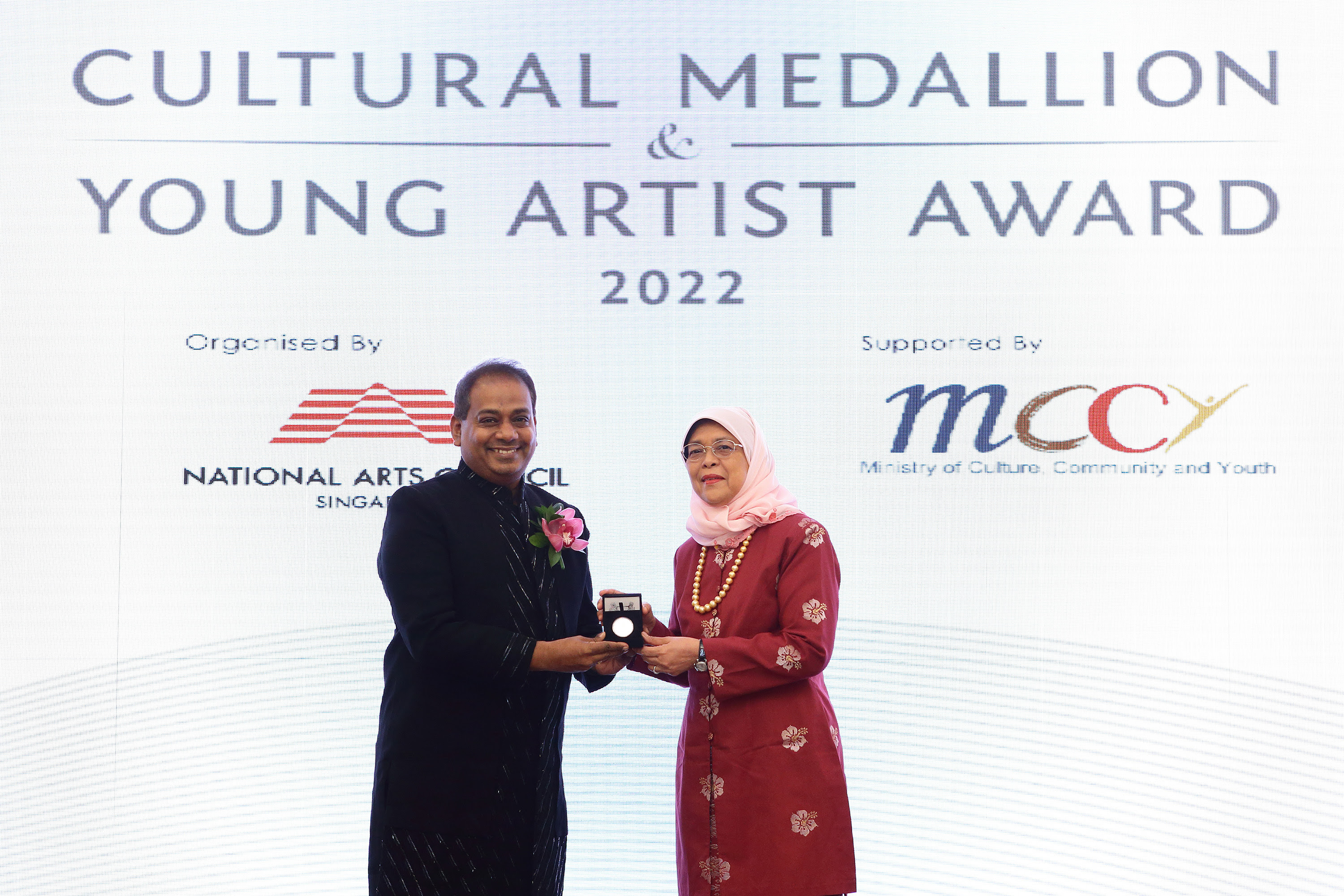 The Cultural Medallion – the pinnacle accolade for arts practitioners in Singapore – was instituted in 1979 to recognise individuals whose artistic excellence, contribution and commitment to the arts has enriched and distinguished Singapore’s arts and cultural landscape.

“I have been blessed to work with many young creative minds at Apsaras Arts, and this recognition will inspire our team to strive towards our vision for excellence. I hope our collaborators, partners and audiences will support this younger generation of Singaporean artists to pursue their passion in the arts, making Singapore stand proud on the global stage,” Aravinth said.

More than 30 years ago, Apsaras Arts’ co-founder Neila Sathyalingam was conferred the same honour. She was most known for her commitment to building Apsaras into a premier dance academy for classical Indian dance form Bharatanatyam, for cross-cultural works with Chinese and Malay dance forms and for showcasing Singapore’s multicultural personality around the world.

Aravinth – who at the time was managing a tech start-up with international employees across 15 countries – was chosen by Neila Sathyalingam to lead Apsaras Arts into the future. To date, he has created and directed more than 35 original productions.

"When I first started out, it was only as a part-timer. So this is an endorsement for the youngsters who are going to take this forward,” he said.

In the National Arts Council of Singapore’s Cultural Medallion citation, Aravinth is described as follows: “Over three decades, with a sense of commitment and conviction, Aravinth has envisaged and nurtured Bharatanatyam with imagination and ingenuity. His artistic philosophy drives his pursuit in enabling the dance form, predominantly a solo art form, to transform into a fine and compelling ensemble-centric expression."

His dream and desire is to create and nourish a repertory company, a one-of-its-kind in Singapore as well as arguably across the world, in the space of Bharatanatyam.

“Much like his creations which are diverse in form and content, Aravinth is a storehouse of numerous identities which inspire and influence each other. An artist par excellence, he is conscious of tradition yet also cognizant of rapidly changing global dynamics where innovation and technology have vital roles to play. During the pandemic, Aravinth produced two unique digital and CGI-based dance films – ‘SITA’ and ‘AMARA’ - that pushed the envelope and pioneered a new possibility for the world of dance in exploring the digital space.

“Under his leadership as Artistic Director, Apsaras Arts Dance Company has built a stunning repertoire, boasting more than 35 full-length productions, that sparkles with a distinct identity. As a Singaporean flag-bearer for Indian classical dance ensemble work which is inspired by South-east Asian narratives, the company raises a toast to the potential of Bharatanatyam which is presented at various venues and world-class festivals.”

Locally, in 2019, he was conferred the Kala Ratna award by the Singapore Indian Fine Arts Society and the Natya Kala Upasana award from Bhaskar’s Arts Academy in the same year.

Nationally, in 1999, he was conferred the National Arts Council’s Young Artist Award. In 2020, under his stewardship, Apsaras Arts was conferred the inaugural 'Stewards of Intangible Cultural Heritage Award', which recognises individual and groups dedicated to the promotion and transmission of their practices, who have made outstanding contributions in their field.

With this further recognition through the 2022 Cultural Medallion, Aravinth takes his place among more than 130 of the most respected arts and culture practitioners in Singapore.

Internationally, he has been recognised through awards and collaborations. Most notably, he has been advisor for the creation of the repertory work SARASWATI ANTRAVAHINI by Kalakshetra Repertory Company, the world’s most respected training institute for Bharatanatyam. In 2017, Kalakshetra repertory company was featured in the dance production ANJANEYAM directed by Aravinth. This year, Kalakshetra presented an Apsaras Arts production AMARA, also directed by Aravinth. It had presented Apsaras Arts production ALAPADMA in 2016.

As a champion of industry development, he has, over the past decade, curated and convened the annual Indian Performing Arts Convention (IPAC) held in Singapore. Australia’s Monash University came on board as a partner in 2021, fulfilling his vision to grow the effort and provide more opportunities for professional and emerging professional Indian classical dancers to deepen their skills through workshops with master dancers and musicians.

Under his leadership, Apsaras Arts is possibly the most internationally travelled dance company in Singapore, regularly touring and presenting sell-out shows of original works in France, the UK, Australia, Malaysia, India and Sri Lanka. Apsaras Arts dancers and musicians have toured to more than 40 countries, collaborating with leading dance companies, legendary dancers, choreographers, composers and presenters from the international Indian dance fraternity.

“More than me deserving the award, it is the work that I have done that deserves to be recognised,” said Aravinth. “The vision of the work has to be taken forward. So, this will give a boost and encouragement for others to go forward.”