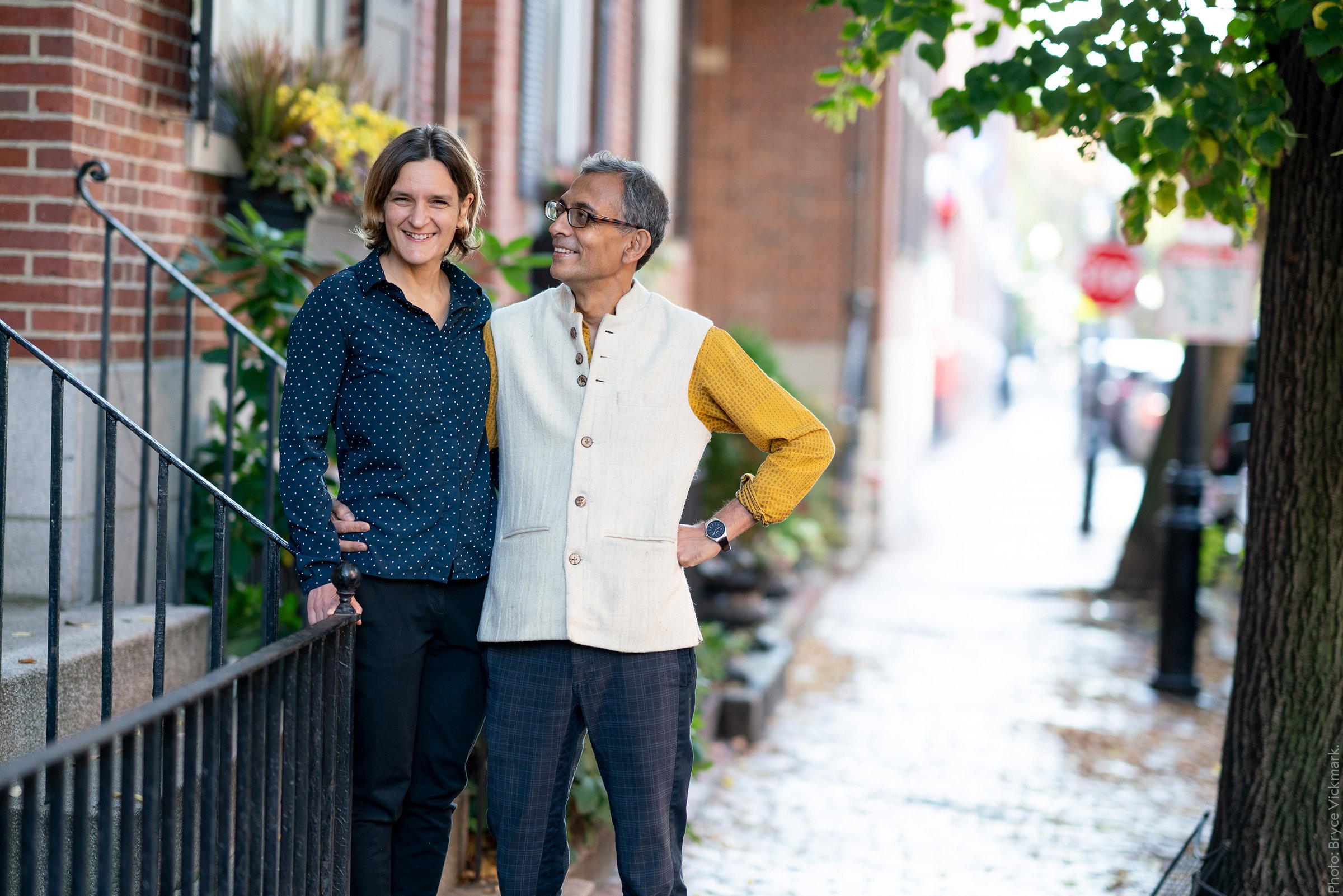 Esther Duflo and Abhijit Banerjee were joint winners along with Michael Kremer of the Nobel Prize for Economics. Photo courtesy: Twitter/@NobelPrize

On Monday, October 14, the Nobel Prize for Economics, also known as the Sveriges Riksbank Prize in Economic Sciences, was awarded to Abhijit Banerjee, Esther Duflo and Michael Kremer for their efforts in "fighting poverty". The fifth married couple to win a Nobel Prize together, Banerjee and Duflo have spent years studying and conducting experiments on global poverty with a special focus on India.

The couple’s work has dramatically improved the fight against poverty with over 5 million Indian children having benefited from programmes of remedial tutoring in schools, according to the Royal Swedish Academy of Sciences.

The duo has many, many accolades to their names with the Nobel Prize being just the latest in a very long list of achievements. 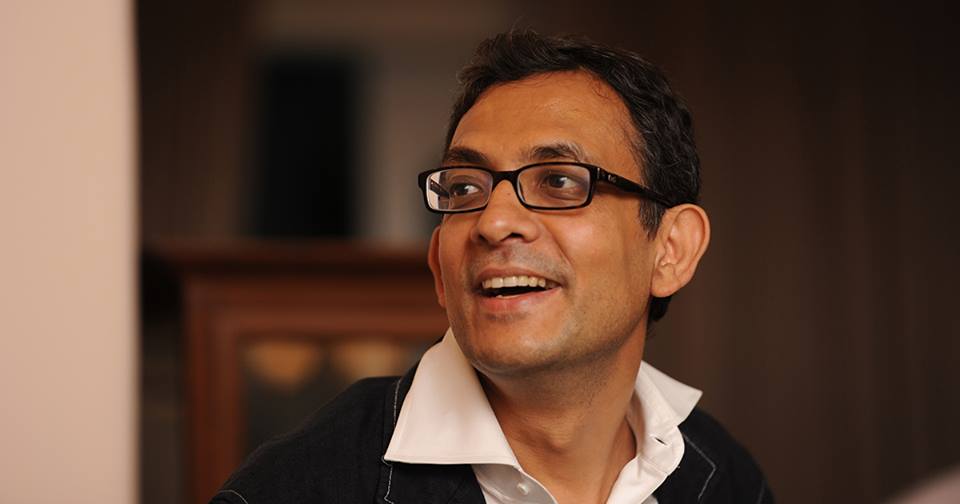 As a child, Abhijit Vinayak Banerjee grew up feeling very envious of the slum children who lived in the area behind his house on Mahanirban Road in Kolkata. He was forced to go to school while they could play marbles all day.

Unbeknownst to him back then, it was these childhood experiences of playing and interacting with slum children that laid the foundation of his life’s work and legacy in trying to understand and alleviate poverty.

Born in Mumbai in 1961, Banerjee moved to Kolkata where he grew up, attending South Point High School. His childhood was spent in a house where he was surrounded by talks of economics, poverty and its causes and consequences. This was but natural with both parents being economics professors - his mother, Nirmala Banerjee, a professor at the Centre for Studies in Social Sciences, Calcutta and his father, Dipak Banerjee, a professor and the head of the Department of Economics at Presidency College, Calcutta.

After finishing high school, Banerjee joined the prestigious Indian Statistical Institute (ISI). However, within a week he had left and shifted to Presidency College, where his father taught economics and which is also the alma mater of the only other Indian who has won a Nobel Prize for Economics, Amartya Sen. 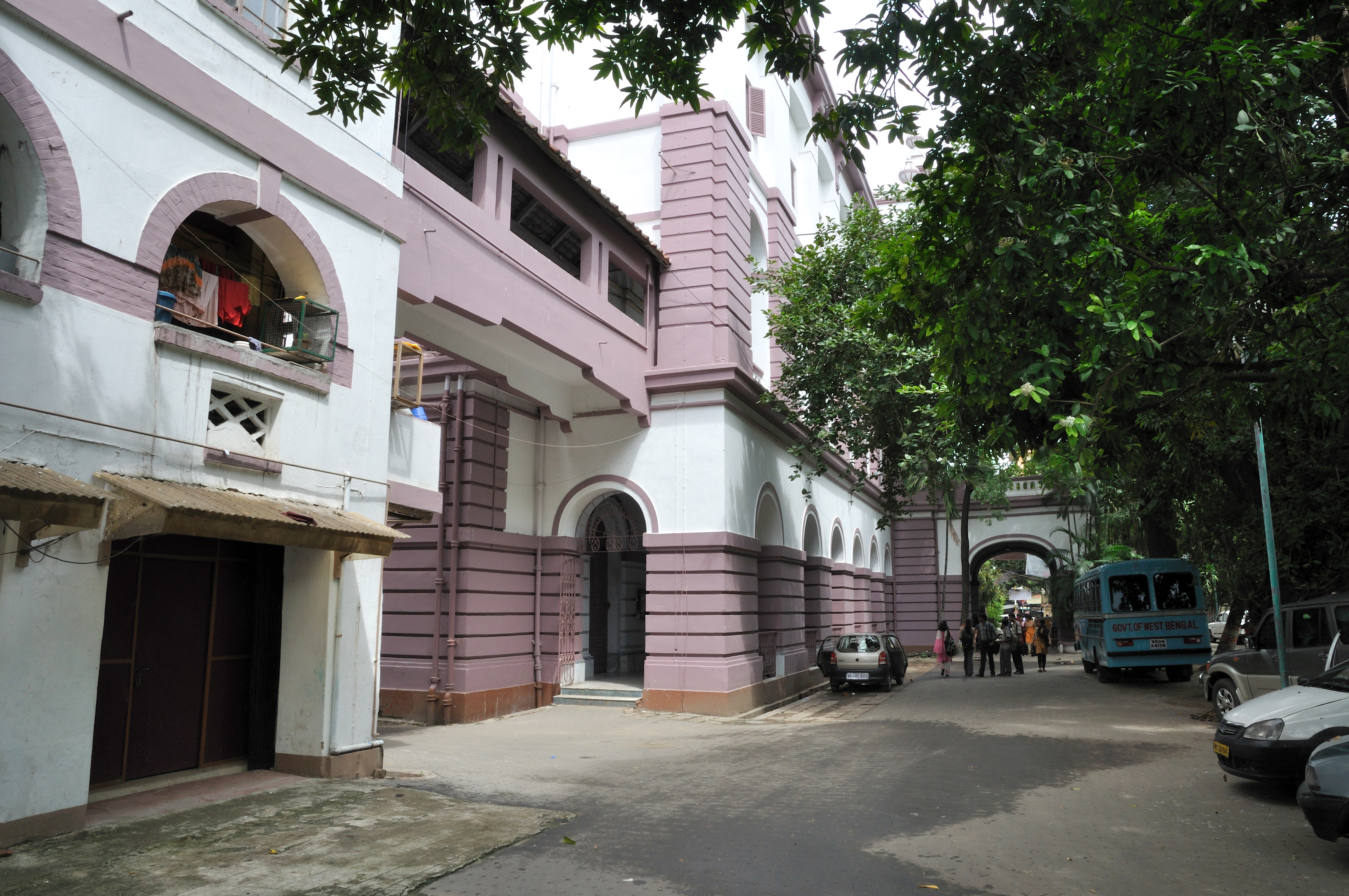 Banerjee then moved to Delhi where he received admission to both Delhi School of Economics (D School) and Jawaharlal Nehru University (JNU), eventually choosing the latter for his MA because of its appeal of discourse, debate and liberal atmosphere. In fact, as part of a political agitation during his time at the university, he even spent 10 days in Tihar Jail. Banerjee was thrown in jail by the police for "gheraoing (surrounding) the vice-chancellor in his house for the umpteenth time" during protests over expulsion of the student union president along with a hundred others. 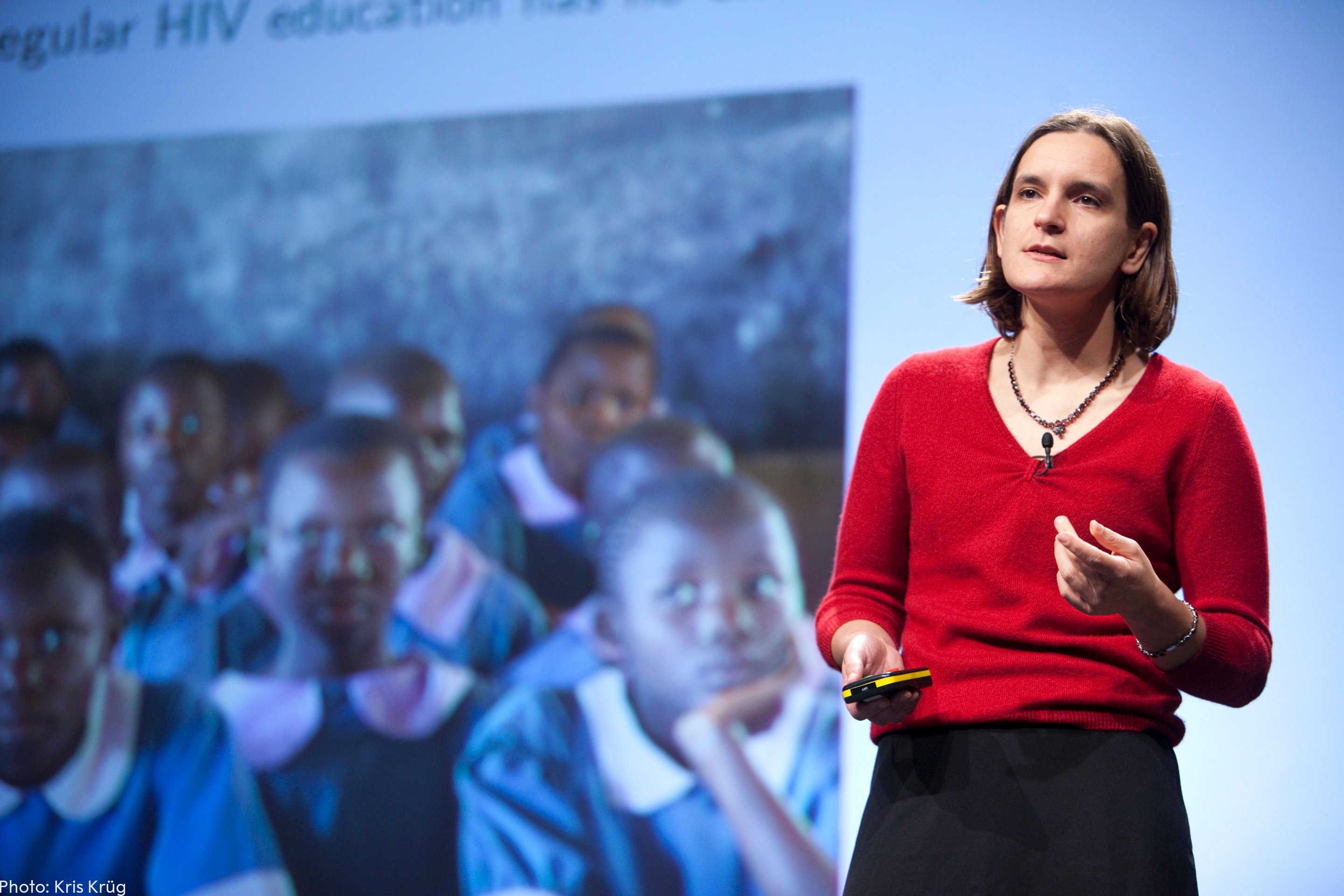 Born in 1972 in Paris, Esther Duflo had a completely different childhood to Banerjee.

The daughter of a paediatrician mother and a mathematics professor father, Duflo’s childhood interest lay in studying history. Her knowledge of India was guided by a comic book on Mother Teresa and Kolkata that she read at the age of 6, which led her to think of it as an overcrowded city with people living in tiny spaces - an image that was dispelled when she eventually visited the city at age 24 as an MIT graduate student. Looking out of the taxi window all she saw were empty pavements, trees and patches of grass.

Studying history and then considering a career in the civil service or politics, Duflo spent ten months in Moscow, starting in 1993, where she taught French. She also worked as a research assistant for a French economist as well as for Jeffrey Sachs, an American economist at Harvard University, advising the Minister of Finance. These experiences led Duflo to conclude that economics had the potential to change the world and that she could satisfy academic ambitions while doing things that mattered. And thus began her journey as an economist.

In 1999 she completed her PhD from the Massachusetts Institute of Technology (MIT), following which she was appointed an assistant professor at MIT - the youngest faculty member to serve at the institute at age 29.

Duflo met Banerjee at MIT, where the Indian professor was a joint supervisor for her PhD.

Poverty in India had always been a subject close to Banerjee’s heart and from 1997 onwards he and Duflo began taking special interest in studying and understanding it. 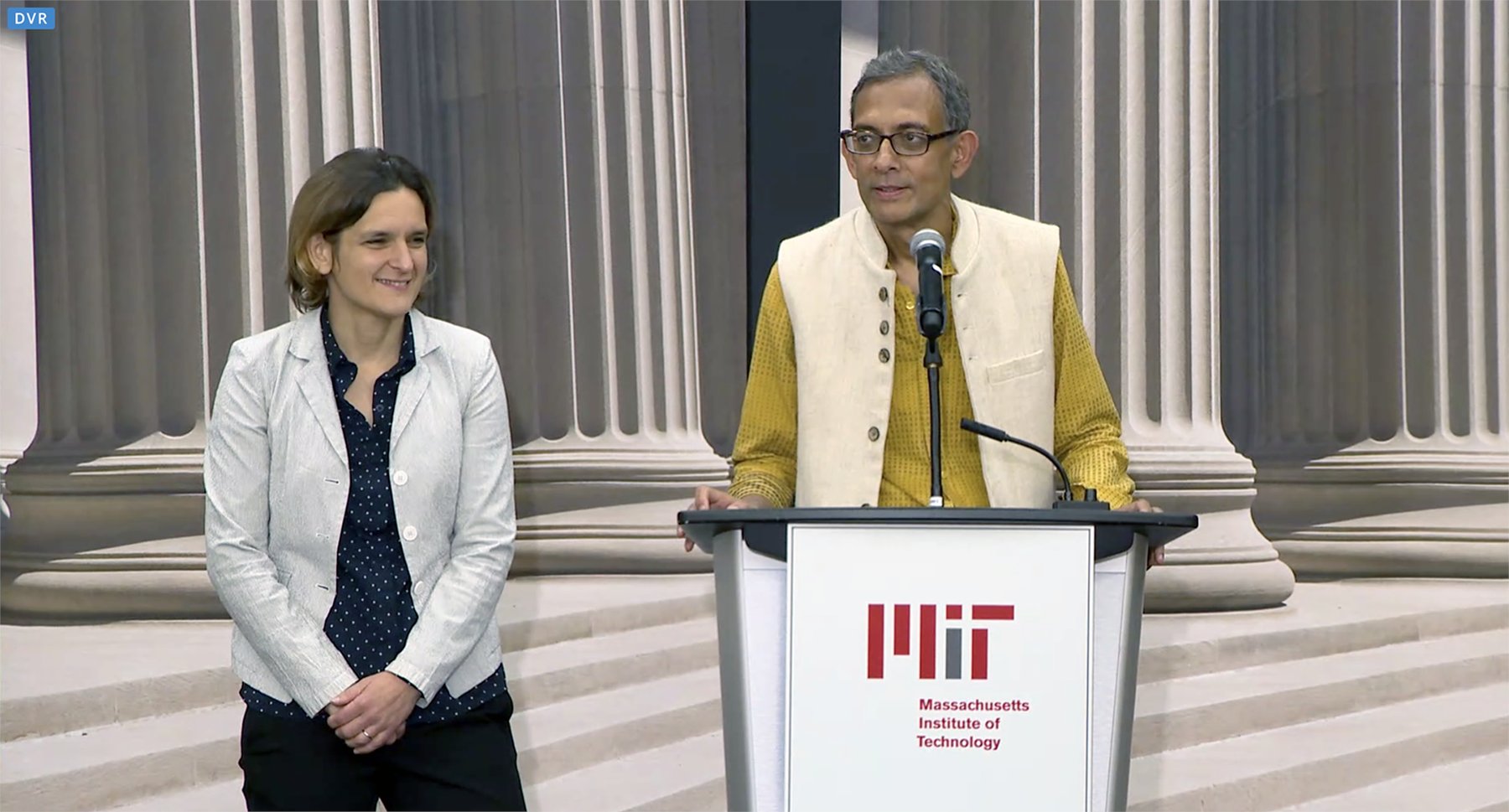 Banerjee was the joint supervisor of Duflo's PhD at MIT. Photo courtesy: Twitter/@MIT

"This urge to reduce the poor to a set of clichés has been with us for as long as there has been poverty. The poor appear, in social theory, as much as in literature, by turns lazy or enterprising, noble or thievish, angry or passive, helpless or self-sufficient," Banerjee and Duflo wrote in their book, Poor Economics, which examines the real nature of poverty and how the poor react to incentives.

The problem, according to the duo, was that the poor get admired or pitied and are also not considered knowledgeable.

The need, they felt was, "to stop reducing the poor to cartoon characters and take the time to really understand their lives, in all their complexity and richness".

Banerjee and Duflo decided to start working on studying the world's poorest and how markets, incentives and institutions work for them. In 2003, they founded the Abdul Latif Jameel Poverty Action Lab (J-Pal) at MIT to study poverty.

J-PAL began with just six staff members in 2003 and has since expanded to become a global research center with 181 affiliated researchers and 400 staff at leading research universities around the world. Read more in our press release: https://t.co/t0BVCqbyMY pic.twitter.com/xkUZAmd4qU

The couple has conducted as many as 70-80 experiments over the years, in a number of countries, especially in India and Africa, in a bid to understand what the poor are able to achieve and where and the reason why they require assistance or encouragement.

Work and experiments on poverty 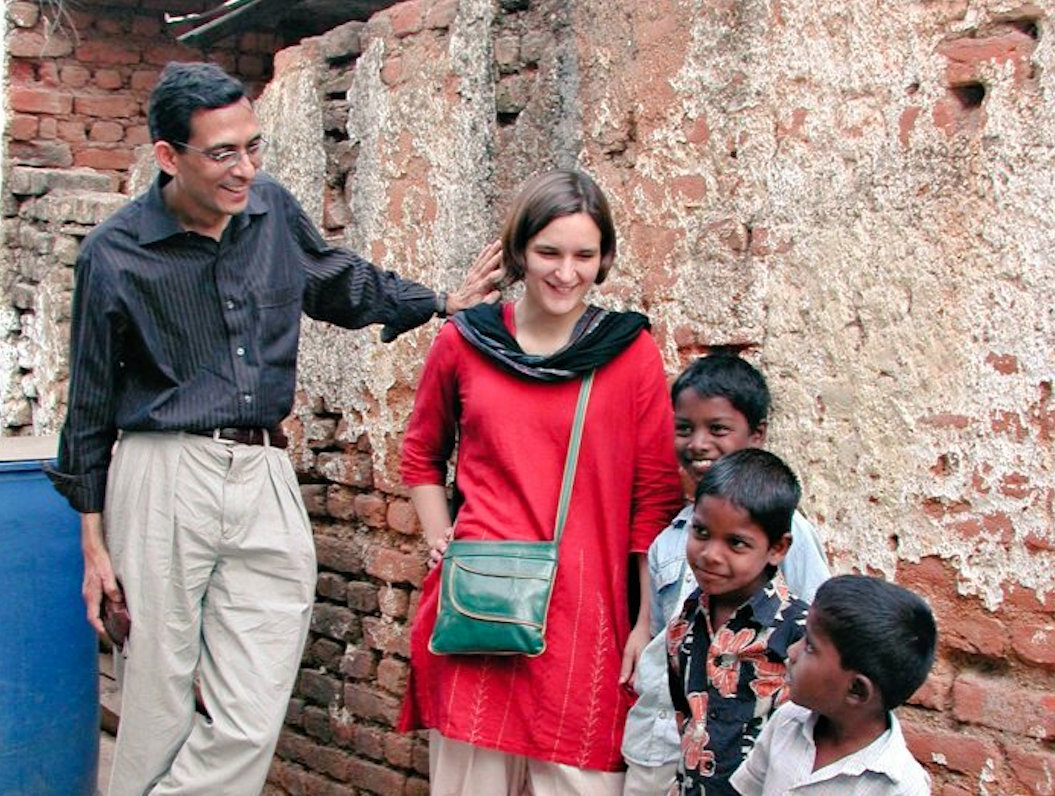 The couple have conducted a number of surveys and experiments to try and understand the lives and motivations of the poor. These are just a few examples:

Banerjee and Duflo have had illustrious careers studded with a number of accolades and achievements, of which the Nobel Prize for Economics is just the latest.

Professors Esther Duflo and Abhijit Banerjee, co-directors of MIT's @JPAL, receive congratulations on the big news this morning. They share in the #NobelPrize in economic sciences “for their experimental approach to alleviating global poverty.”

Banerjee has served as president of the Bureau for the Research in the Economic Analysis of Development, as a research associate of the National Bureau of Economic Research (NBER), a Center for Economic and Policy Research (CEPR) research fellow, a fellow of the American Academy of Arts and Sciences and the Econometric Society, an Alfred P Sloan fellow and is a winner of the Infosys prize.

He has also served as a member of the UN Secretary-General's High-level Panel of Eminent Persons on the Post-2015 Development Agenda.

A huge congratulations again to our new Nobel Laureates! We took some time today to toast Abhijit Banerjee, Esther Duflo, and Michael Kremer—we are beyond proud to work with you.#NobelEconomicsPrize #NobelPrize2019 pic.twitter.com/pEmVoUoIhO

Duflo, meanwhile is an NBER research associate, a board member of the Bureau for Research and Economic Analysis of Development (BREAD), and director of the Center for Economic and Policy Research's development economics program.

My warm congrats to Abhijit Banerjee, Esther Duflo, and Michael Kremer on winning the Nobel for their work on global poverty. I am especially proud that Esther came to the IMF in 2016 to deliver our Richard Goode lecture. #NobelPrize pic.twitter.com/fqgzi5l9rq

In 2014, she won the Infosys Prize in Social Science-Economics for leading "a major shift in development economics".  In November 2013, she was honoured as an Officer of the French Order of Merit. She is also a recipient of the 2010 John Bates Clark Medal for economists under 40 who have made significant contributions to economic thought and knowledge.

🇫🇷 Congratulations to Esther Duflo, the first French woman and only the second woman to be awarded the Nobel prize in Economics with Abhijit Banerjee and Michael Kremer for their research to alleviate poverty. #NobelPrize

In 2009 she was awarded the ‘genius grant’ by the MacArthur Foundation. She is the youngest and only the second female winner of the Nobel Prize for Economics. 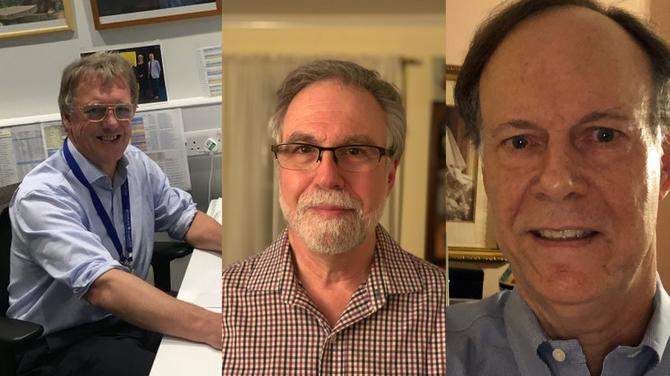