The sixth edition of the Indian Heritage Centre's CultureFest 2020 had its first-ever digital launch on September 5 followed by two weeks of a line-up of programmes, all revolving around the Indian epic, The Ramayana.

Among the many events during the one week school holiday that coincided with the first half of the CultureFest fortnight, was a storytelling session by Kamini Ramachandran and an online art exhibition by Yip Yew Chong. 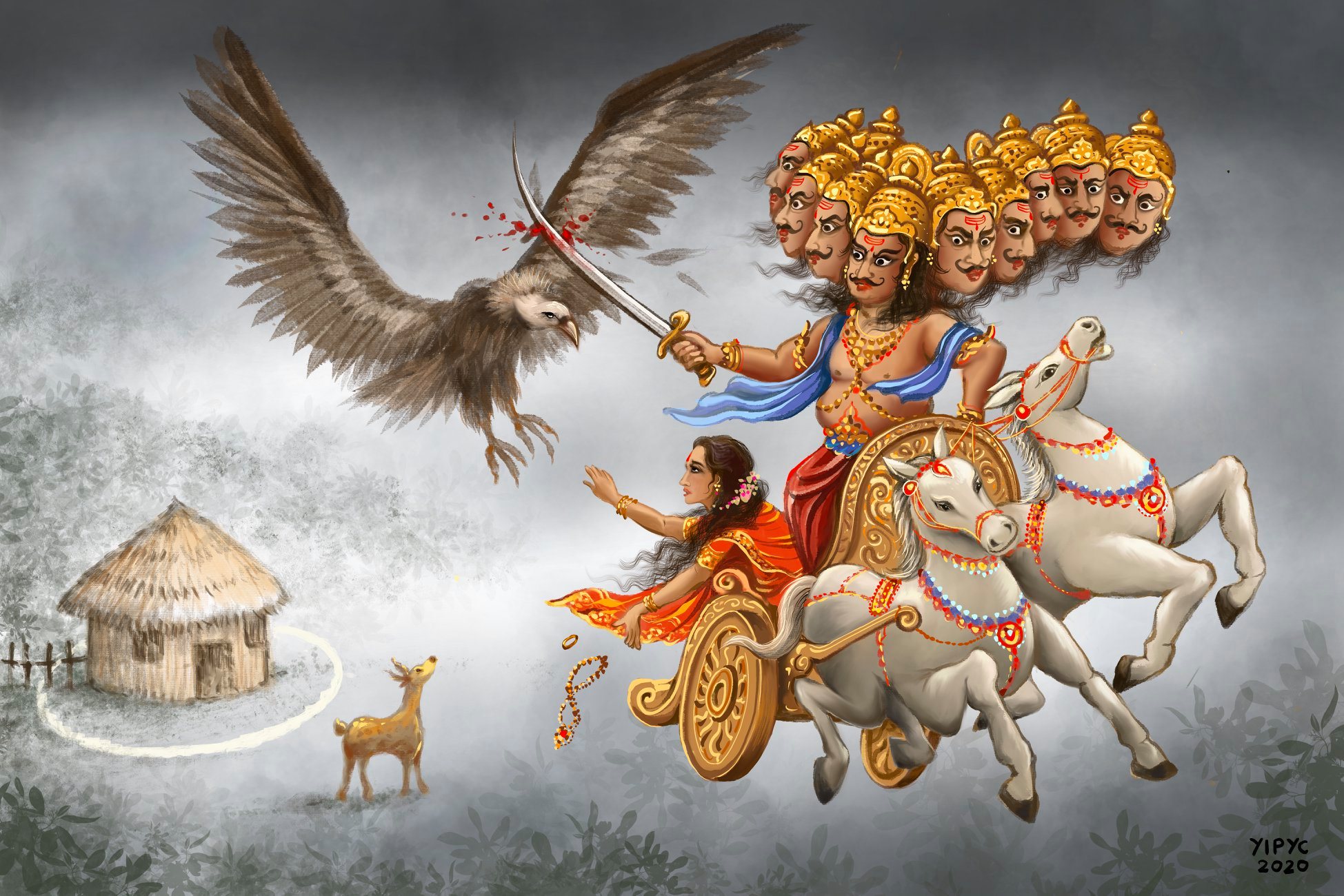 Yip Yew Chong’s illustration of Ravana’s capture of Sita, and the Vulture Jatayu’s attempt to save her. Photo Courtesy: IHC

The duo kickstarted the school holidays with a collaborative project in which mural artist Yew Chong created digital illustrations of scenes from The Ramayana, which professional storyteller Kamini turned into a concise story adaptation.

“Summarising a long epic like The Ramayana was a challenge as I had to consider the best way to present this classic tale by making it accessible to new audiences,” Kamini told Connected to India.

“Though it is a well known Indian story, there will always be newcomers who require some guidance to enter such a long epic tale,” she added. 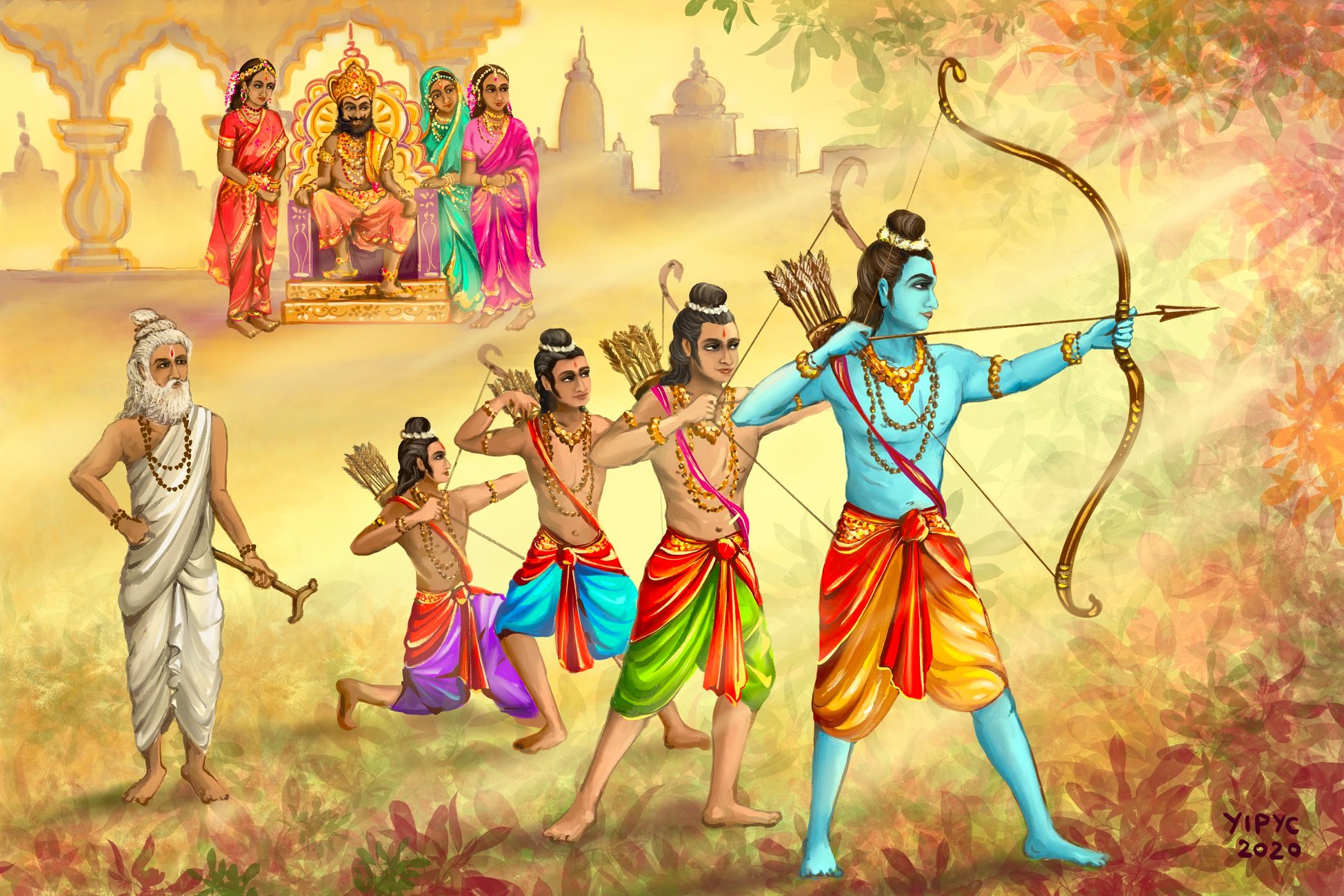 Reliving the ancient epic through bite-sized stories along with a six-part digital illustration depicting key scenes in each chapter, was how an e-book was created.

Presented by the Indian Heritage Centre as part CultureFest 2020, the free 15-page abridged version can be downloaded as a pdf e-booklet. 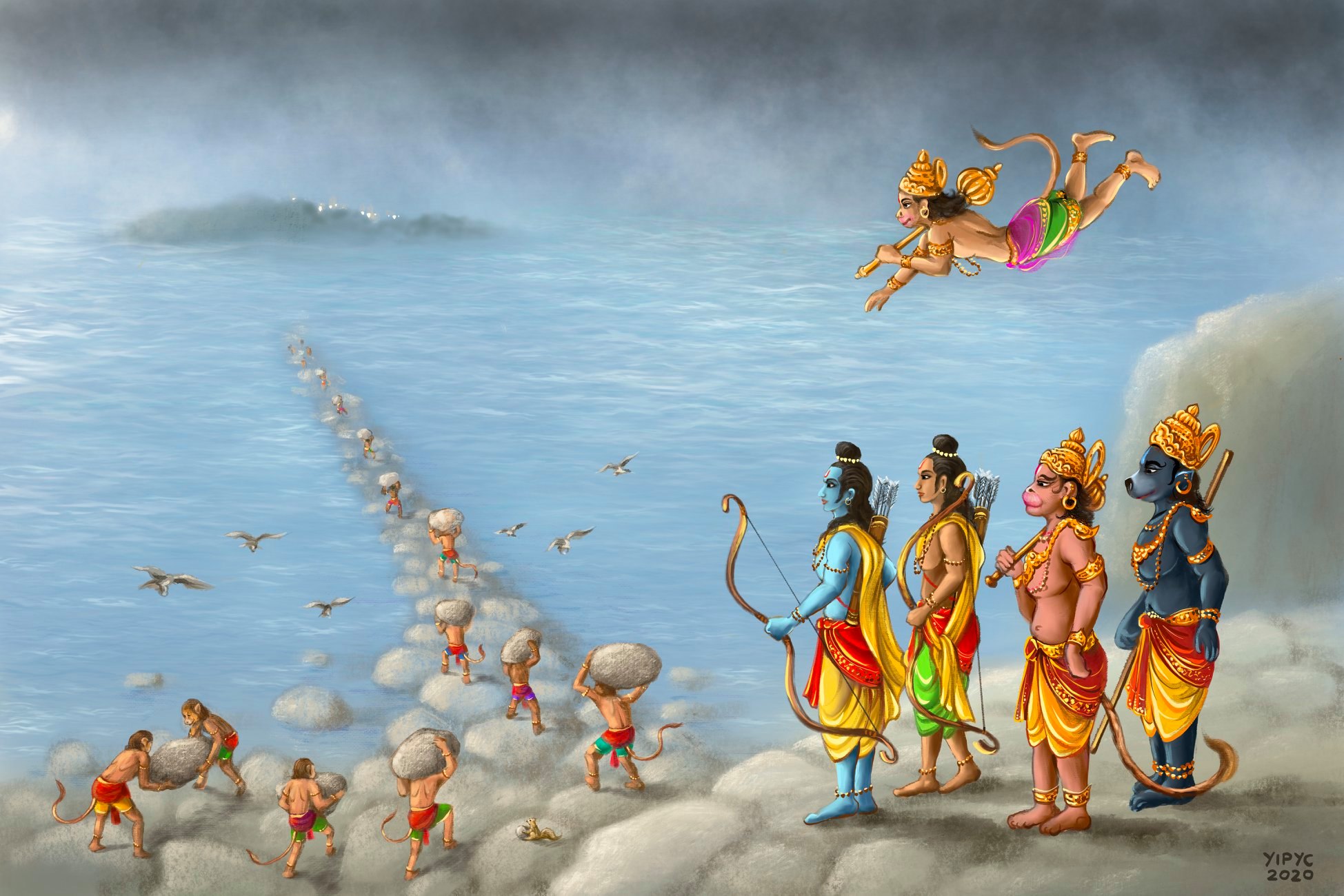 The process consisted of discussions on the actual story, draft illustrations of the layout, followed by the presentation of various plots through imagery. Photo Courtesy: IHC

Kamini wrote an abridged version of The Ramayana in the style of a storyteller to simulate how she would have told the story to a live audience.

“This project is also complemented by a storytelling video where I tell The Ramayana as a brief summary,” said Kamini.

“Yew Chong's illustrations provided a secondary layer of storytelling that helped to depict certain aspects of the story through visuals,” she added.

The illustrations have sub-plots within the main image - and this was a method that the illustrator and storyteller felt was suitable for this project. 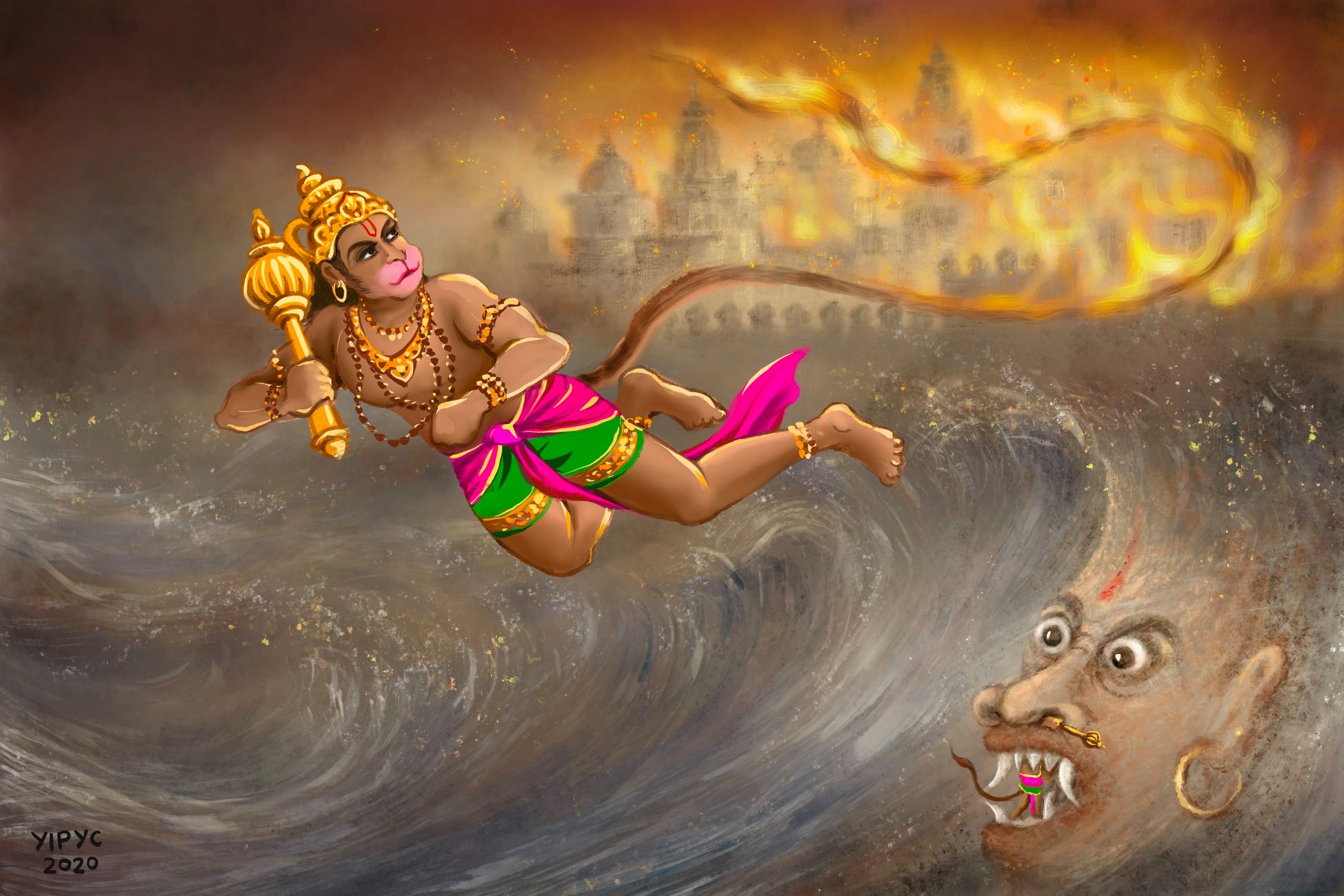 These are the first-ever digital illustrations for a story, and that too on Indian mythology, by Yew Chong. A Chinese artist who paints street murals around Chinatown, Yew Chong has made a name for himself in Singapore.

The duo have worked together previously, so there was already an understanding of each others' creative practice and styles, said Kamini.

“Our process consisted of conversations to discuss the actual story, draft illustrations of the layout and how to present the various plots through imagery,” Kamini told Connected to India. 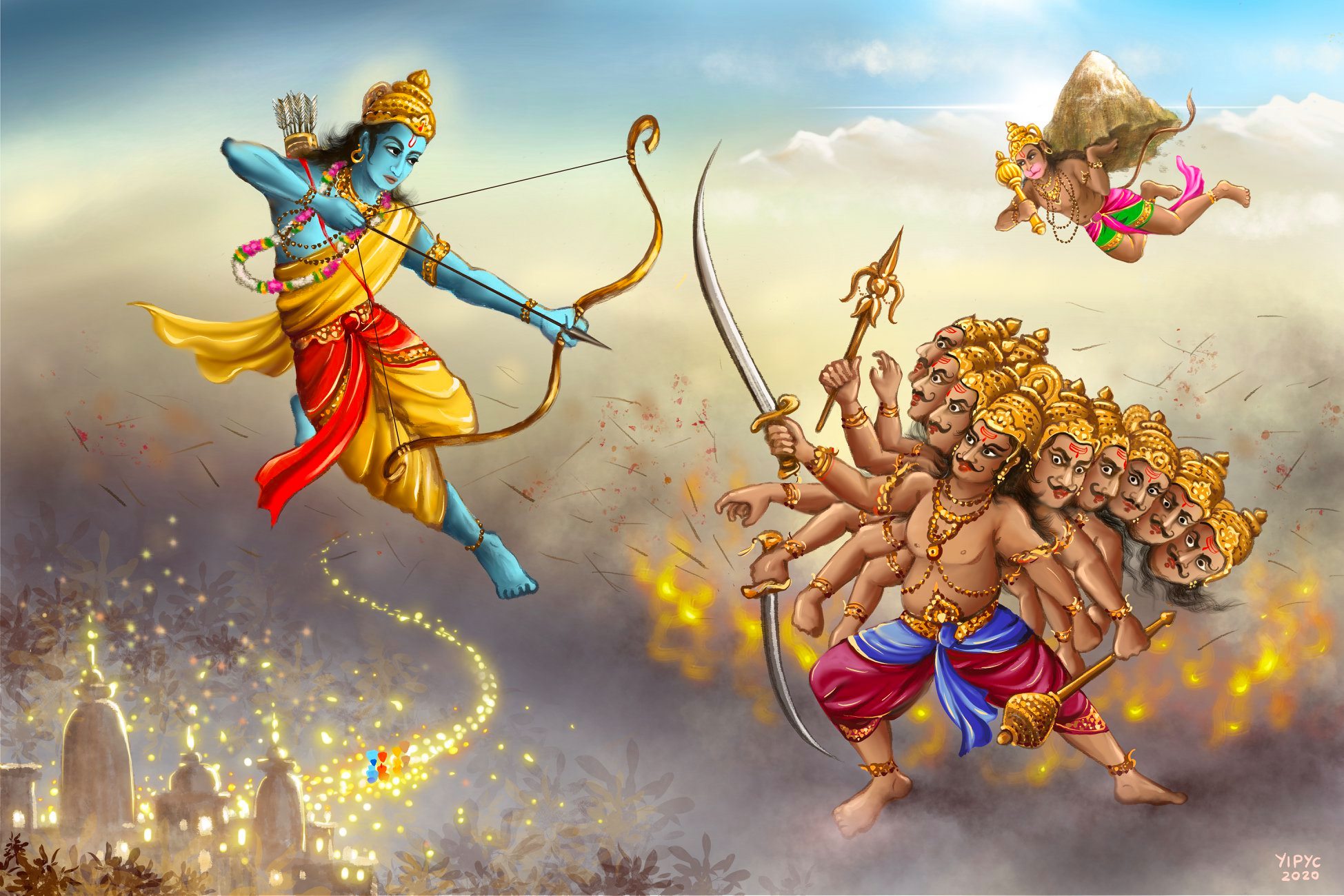 “I was confident that Yew Chong would be able to interpret my text and depict an authentic representation of The Ramayana,” she added.

The creators hope the concise e-book will ignite the readers’ interests to explore more of this famous epic.